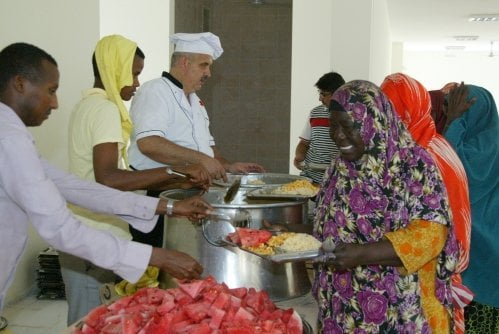 Women rights activists and Civil Society Organisations (CSOs) recently gathered in Istanbul, Turkey to address the failures of the Millennium Development Goals (MDGs) on the rights of women, and proffer solutions for inclusion in the post-2015 agenda, at an event organised by the Journalists and Writers Foundation of Turkey. Damilola Oyedele was there…

Have the Millennium Development Goals (MDGS) failed to adequately address issues of women rights across the globe? The High Commissioner, United Nations Commission for Human Rights (UNCHR), Ms. Navi Pillay, certainly thinks so. For her, the MDGs did not address a number of critical issues bordering on women as they are too narrowly defined.

In a video message to participants at the Summit on Women’s Perspectives on UN Post 2015 Development Agenda held in Istanbul recently, Pillay lamented that the MDGs failed to address the shocking crimes of Gender Based Violence (GBV), failed to highlight a demand for equal access for women to the common goods of education, housing, sanitation and water.

According to her, they also ignored the terrible burden of conflict on women. By being too narrowly minded, Pillay believes the MDGs restricted women issues to those affecting motherhood and the injustice of women’s unpaid work.

“Our new framework for development must therefore be built upon the great human right treaties that form the bedrock of our international system. Its goals must be aligned with those of human rights including freedom from want, freedom from fear, non-discrimination and equality and protection of our environment. In each area, our new development framework must specify the actions that would be needed to ensure women’s rights with explicit reference to realities of women’s lives and the long and suffocating legacy of discrimination,” she said.

Summit Focus The two day summit, organised by the Journalists and Writers Foundation, a Turkish NGO which holds a General Consultative Status with the UN Economic and Social Council (ECOSOC), was aimed at contributing to the process of the post-2015 new agenda named the Sustainable Development Goals (SDGs).

Highlights of the agenda for the 306 participants and 109 NGOs from 44 countries include eradication of poverty: what should be done in post-2015 development agenda to go further, specific policies for women, ways to change the rhetorics from that of ‘charity’ to that of partnership and the creation of decent work for inclusive growth.

Filling the Gaps Under the Women’s Empowerment agenda, participants examined modalities for the prevention and elimination of all forms of violence against women and girls, ensuring equal rights of women to own and inherit property, equal opportunities in decision making positions, enabling gender equality in employment and eliminating obstacles for women to enter political, economic and public life.

Victims of Discrimination From Albania, to Norway, to Lithuania, to Nigeria, to Mozambique, to Istanbul, one thing was clear, that several years following the Beijing Declaration and Platform of Action (1995) and the Cairo Declaration on Population and Development (2004), women across the world continue to suffer all forms of discrimination despite their national governments being signatories to agreements from these declarations.

In Egypt, although women were fully a part of the revolution tagged ‘Arab Spring’, they were labelled unpatriotic when they put forward the gender agenda before the new political class. In Albania, only six per cent of farmlands are owned by women, and 87 per cent of women do not get paid for the work they do. In Turkey, only 25 per cent of women are in the country’s labour force, and women have been cast primarily as home makers who should be dependent on their husbands.

In India, reports of rape and bride murders continue to dominate the headlines. In Pakistan, the right of choice in marriage continues to be elusive for most women. In Sudan, women risk being stoned to death if they exercise choice in marrying outside their religion. In Saudi Arabia, women are still denied the right to drive, even though it is the 21st century.

In Nigeria, half-hearted gender equity attempts by the different arms of government have helped to perpetuate GBV, child marriage, female genital mutilation, trafficking in women and girls, unequal opportunities and others, through what has been labelled the need to preserve social and cultural values. Nigerians would remember how the Senate during the last constitutional amendment exercise deliberately refused to peg the marriage age at 18 years, in deference to religious and cultural sensibilities.

Changing the Mindset The attitude which fuels such half-hearted attempts, as the former Executive Director of the UNFPA, Dr. Nafis Sadik, at the summit puts it, is that girls are safer within the ‘confines’ of marriage. Now Special Adviser to the Executive Director of UNAIDS, Sadik believes that a major step towards gender equity and equality is to work to change the mindset of communities and national leaders that gender equality is in everyone’s interest.

“…that resources devoted to universal access to reproductive and sexual health and information and services for girls and women must be an important part of the health agenda. To take action against unsafe abortion does not mean that you must deny that abortion exists. Drive home the message that education, empowering girls and women are essential to economic security, social integration and the whole country’s progress in the area of all of these development goals,” she said while addressing participants.

According to the UN, 40 million girls under the age of 18 are at the risk of early marriage globally, and because of this, the highest cause of death among girls between the ages of 15-19 is maternal death especially in South Asia and sub-Saharan Africa.

“…some families still believe that girls are safer in marriage than in school and their leaders allow the belief to persist. In many girls and many people’s minds even today, women’s role is in marriage and having children, and girl’s education is only a preparation for that. In that case, they think education need not include sexual and reproductive health rights. In fact, they think it should not be included because it might give girls ideas they should not be having,” Sadik lamented.

“We still have a long way to go. In my travels and discussions, I still find policy makers and even national leaders themselves who somehow regard essential services for girls and women as a matter of social welfare and even charity. They think of pregnancy and childbirth as part of the normal things, something that just happens. Apparently in their minds, women’s death and disability just happen too. To the tune of 320,000 maternal deaths a year and 10 times that number of infections and injuries, they are hardly concerned with the oppression which make up women’s daily lives,” she added.

Sensitive Heartbeat As Pillay summarises, the heartbeat of the new agenda must be the heartbeat of accountability, it must track progress of each target and deploy much more accurate and pertinent information on discriminatory laws, unpaid work, inequality within the home, gender based violence, and women’s sexual and reproductive health.

“Women’s rights are inseparable from men’s. They are not optional. Protecting and promoting women’s equality is the responsibility of every government. Human rights will only be respected and our societies will only flourish when governments deliver on that responsibility,” she summarised.

Is Anyone There? On the sidelines of the summit, THISDAY visited the Kimse Yok Mu (meaning Is anyone there?), a sister organisation of the JWF. It is a NGO that works to provide humanitarian aid particularly in disaster areas. Established in 2002, the name was coined after the 1999 earthquake in Turkey where those trapped under wreckage and their rescues were shouting at each other: “is anyone there?”.

The NGO, although it has no branches outside Turkey, currently works in 110 countries with like-minded NGOs resident in those countries or individuals. It has 60,000 volunteers working in all its 41 branches across Turkey.

Kimse Yok Mu professional volunteers provide psychological support to those traumatised by disasters, and build temporary shelters for families that have lost their homes. Poor families are assisted to become economically empowered and their debts are paid off where they exist. The NGO currently has at least 500 Somalis studying in Turkey on scholarship.

Some of its volunteers make items such as table-clothes, shawls, embroidered outfits, etc for sale to raise funds for the humanitarian work. “Some of the ladies choose to volunteer their services at the centre instead of just staying at home. We do not pay them any money for their services but they get to socialise with each other and do some good to humanity,” Demirtas said.

She also explained that the organisation carries out adequate investigations to verify claims that a family or individual is indigent before including such on its charity programmes. This, she said, is to ensure that the services go to those who truly deserve them.

A panel discussion was organized by the Brussels-based Intercultural Dialogue Platform in the European Parliament (EP) to give information about the faith-based Gülen movement, also known as the Hizmet movement, especially within the framework of recent developments in Turkish politics.