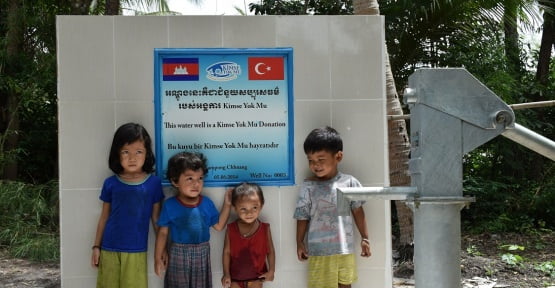 In partnership with the Cambodian Ministry of Social Policies and the Turkish-initiated Mekong Foundation, the charity established the new water wells in the city of Thbong Khmom.

On behalf of the minister of the social policies Vong Sauth, his undersecretary Chhay Vanna attended the grand opening of the water wells along with Mekong Foundation’s president Hakan Atasever, several local authorities, opinion leaders and local people. The undersecretary Vanna expressed his thanks to both foundations and highlighted the need for more such efforts given the poverty the country has been experiencing.

Next, Hakan Atasever noted that they made the water wells available only after analyzing the water samples in laboratories to ensure they meet health standards. Atasever went on to say they have been doing these without expecting anything in return and will spare no effort to assist the Cambodians. He also thanked KYM and the donors for making all these possible.