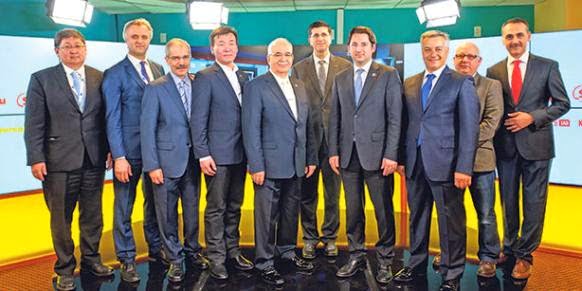 Turkish lawmakers, public figures and representatives of Turkish groups in the area joined the opening ceremony of the new studio, the first TV studio opened by a Turkish news channel in Washington.

The studio highlights the expansion of the Samanyolu Media Group, which has been under tremendous pressure by the government over its critical coverage, and whose CEO still remains behind bars after spending almost three months in prison. On behalf of the Samanyolu Media Group, Editor-in-Chief Metin Yıkar said his media group is breaking new ground yet again, and this time in the world’s “most important capital.”

Reminding his audience that recent, ominous developments in Turkey are more closely monitored by the United States than by any other country, Yıkar noted that Turkey’s decline into authoritarianism is clear. “The fact that our media group’s president, Hidayet Karaca, has been in prison for almost three months on fictitious charges of leading an armed terrorist organization based on two words in a soap opera is the most apparent example of this,” Yıkar stressed. He claimed that the government is not only “attempting to muzzle STV,” but also that it aims at silencing and smothering any broadcasting outlets that have critical coverage.

Despite all the pressure, Yıkar said on behalf of himself and everyone at STV, “We are looking toward a completely new future.”

From prison, Karaca also congratulated his staff on the opening of the Washington studio, which he said will serve democracy in Turkey. Karaca, who remains in prison without any charges, indictment or a trial date, said, “We hit the road for this purpose and no matter the cost we will never turn back.”

As CEO, Karaca is responsible for 14 television stations in four languages, including Arabic and Kurdish. “I send my greetings to you from a prison cell, along with many journalists who are paying the price for freedom and democracy,” Karaca wrote in a letter read during the opening ceremony. “I know that we are not alone in this path toward peace and freedom,” he added.