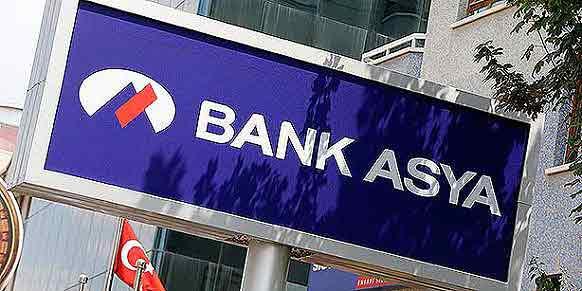 A Bank Asya logo is seen at a branch in Ankara. (Photo: Reuters)

Social networking sites in Turkey are plastered in notices from customers trying to raise funds in the form of deposits for the bank. “Save Bank Asya from sinking!” reads one.

The Islamic lender, which has more than a million deposit-holding customers and 282 branches, is caught in a power struggle between President Tayyip Erdogan and Fethullah Gulen, an Islamic cleric whose sympathizers founded the bank.

Erdogan has long accused Gulen – now based in the United States – of seeking to overthrow him and has pledged to purge institutions such as the police and judiciary of his supporters. Their rift has gained intensity since last December’s discovery of a government graft scandal which Erdogan blamed on the cleric’s supporters. Gulen, via his official websites, denied any involvement.

Seeking to show loyalty to Erdogan, state-owned firms and institutional depositors earlier in the year withdrew 4 billion lira ($1.75 billion), or some 20 percent of Bank Asya’s total deposits, according to media reports.

The bank has declined to comment on those figures and declined to be interviewed by Reuters.

Despite reporting a drop in profits and deposits however, chief executive Ahmet Beyaz said in an interview with Samanyolu Haber television on Sept. 16 that the bank had one of the strongest capital structures in the industry and will survive.

Bank Asya’s capital adequacy ratio stood at 17.35 percent as of end of June, one of the highest in the sector, and above the Turkish banking sector’s average of 16.3 percent.

Many of its customers are determined to help and so far their new deposits have kept the bank on its feet.

One 43-year-old who is selling his car to deposit funds in the bank told Reuters: “I’ve been a Bank Asya customer since 1999. This smear campaign is an intentional move … I will never let them sink my bank.”

“My aim is to contribute, even if it’s just 1,000 lira. I want to increase my deposits at the bank,” added the man, who declined to be named because of the sensitivity of the row.

Help appears to be coming from other sources too. Several sources with knowledge of the situation said the central bank had indicated when the deposit withdrawals started earlier this year that it would allow Bank Asya to access its reserves to stave off any liquidity crunch.

One of those sources said that the central bank’s decision had angered Erdogan, prime minister til he won a presidential election in August.

“Erdogan was traveling when that happened. He said he wanted Bank Asya’s keys on his table when he came back,” said the source, who had direct knowledge of the matter and asked not to be named because of the sensitivity of the issue.

“When he returned and found out that (central bank governor) Erdem Basci allowed the use of required reserves, he got furious.”

Erdogan has denied any effort to undermine Bank Asya.

“It’s being said that there are efforts being made to sink a bank. There is no work being done to sink a bank. This bank has already failed,” he told business group TUSIAD at a conference in Istanbul last month, while not mentioning Bank Asya by name.

“But they are trying to keep it afloat with a few buckets of water … Shall we repeat past mistakes and keep alive such a failed financial institution?” he said, referring to Turkey’s previous banking crises.

Pro-government newspapers have carried almost daily reports on Bank Asya’s trouble, portraying it as a failing bank being propped up by members of Gulen’s “Hizmet” (Service) network and calling for the banking watchdog to intervene.

Bank Asya said in an e-mailed statement on Sept. 5 it would file a lawsuit against the regulators, arguing their failure to stop the publication of such reports was a neglect of duty. Reuters could not determine whether the bank had lodged a complaint.

Sources close to the bank told Reuters that it was far from the conditions for any seizure and that even a deterioration in its financial results would not justify such a move. Beyaz said in the television interview that no customers had been turned away despite the bank’s troubles and that it was meeting all of its obligations.

For the regulator to seize a bank – which it could only do after a long series of precursory steps – the bank would have to have problems meeting its obligations and paying its depositors.

It is unclear how the current stand-off will be resolved. But Turkey’s main opposition party CHP has warned Prime Minister Ahmet Davutoglu that he could be responsible for a banking crisis if the government fails either to resolve any problems at Bank Asya or halt the campaign against it.

However government officials are at odds over resolution, in particular the suggestion by Deputy Prime Minister Ali Babacan made in an interview with Kanal 24 television on Aug. 6 of a state purchase of Bank Asya, whose shares have seen volatile trading and regular trading halts on the Istanbul stock exchange amid uncertainty over its future ownership.

Babacan said state-run Ziraat Bank, which is looking to launch its own Islamic banking unit, could buy it, but an advisor to Erdogan then denied such a plan. Ziraat then said on Aug. 22 in a statement to the Istanbul stock exchange it had scrapped talks to buy the lender because such an acquisition would not be in line with Ziraat’s priorities.

Bank Asya’s attempts earlier this year to form a strategic partnership with Qatar Islamic Bank also fell through due to disagreement over pricing.

In the end, it might be up to foreign investors to take action. One Istanbul lawyer for a top global firm says this could happen if regulators tried to seize Bank Asya.

Some 54 percent of Bank Asya is listed. Of that, half is held by foreign investors, according to its chief executive.

M & G did not immediately respond to emails seeking comment.

Norwegian fund manager Skagen was an investor in Bank Asya until two weeks ago. When Reuters contacted the fund on Friday, it said it no longer held shares in the bank and declined to comment any further on the matter.

The bank’s biggest private shareholder is Turkish firm Ortadogu Tekstil, which owns 4.89 percent. No-one at the company was available to comment on Friday, which is a public holiday in Turkey.

However the situation is resolved, Bank Asya’s smaller depositors are for now continuing to do their part.

“I don’t approve of what the government has been doing. I find it very ugly. Whatever your political opinion, it’s not fair,” said an Istanbul housewife wearing the Islamic headscarf, a customer at a Bank Asya branch in the center of the city.

“I do not have much, but if I could I would deposit more money into Bank Asya.”