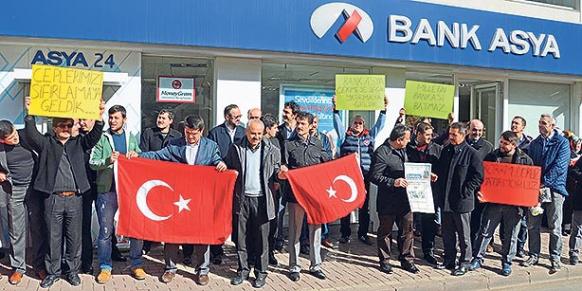 Deposit holders in front of a local branch of Bank Asya in Ordu protested the recent decision of BDDK on Thursday. (Photo: DHA)

Turkey’s banking watchdog, the Banking Regulation and Supervision Agency (BDDK), handed management control of 63 percent of the privileged shares of Bank Asya over to state savings funds on Tuesday, citing a lack of certain key documents as the reason why the bank cannot maintain its operations. The bank’s shareholders are currently preparing to provide the watchdog with the required documents and the bank has separately taken legal action to revoke Tuesday’s intervention, legal experts familiar with the issue told Today’s Zaman on Thursday.

Experts say the BDDK abused its power to engineer a botched legal pretext to intervene in Bank Asya, adding that the watchdog will have to revoke the illegally problematic decision sooner or later.

Based on this information, one anonymous source with knowledge on the issue said, “The authorities hijacked the bank of its right to control its own board. … President Recep Tayyip Erdoğan has been trying to find the best legal pretext to sink the bank [Bank Asya] for more than a year and this latest maneuver failed to comply with laws,” the source told Today’s Zaman.

Bank Asya’s management and shareholders denied the existence of transparency flaws on Wednesday. The bank said it will take legal action in response to Tuesday’s decision, which it called a government-orchestrated bid to sink the lender. Those legal steps started to be taken early on Wednesday and the shareholders are demanding that the BDDK immediately revoke its decision to take control of Bank Asya’s management.

The TMSF named a new nine-member management board to Bank Asya on Wednesday and the bank demands that this board step down in favor of the previous management.

Lawyer Nedim Irmak, who oversees the legal procedures of a number of Bank Asya shareholders, told Today’s Zaman on Thursday that they have already took the issue to court and are expecting the TMSF to drop its control over the board of Bank Asya soon. “What we are seeing is a temporary period of TMSF control over Bank Asya, and this will end once the required preparations are finalized,” Irmak stated.

Early on Wednesday, Twitter whistleblower @fuatavni_f claimed that the intervention in Bank Asya had no legal grounds. The Twitter user further claimed that Erdoğan participated in several meetings to engineer a plan to destroy Bank Asya. Irmak said Bank Asya shareholders sent a written warning to the court, filing a lawsuit separately against the BDDK and Capital Markets Board (SPK).

The BDDK asked Bank Asya to provide details about its majority stakeholders within a month, citing insufficient transparency to allow for proper regulation. The bank’s shareholders requested that the BDDK extend the allotted period so they could prepare the required documents, including the address, criminal records, balance sheets and certificates of property ownership belonging to themselves, their company — which is registered as a Bank Asya shareholder — subsidiaries, business partners and relatives.

“The law does not stipulate any time period for such documents to be filed with the BDDK. The watchdog offered very short notice to Bank Asya before all these documents can even be prepared. This contradicts the law,” Irmak told Today’s Zaman.

“Another legal problem with the BDDK’s intervention in Bank Asya is that the watchdog said 63 percent of majority bank shareholders failed to provide them [the required] documents; however, we have found out that this share was 58 percent. Did the BDDK mislead the public?” Irmak asked.

No legal grounds to intervene in Bank Asya

The BDDK does not have the legal authority to appoint a new board at any bank unless it makes sure all the majority shareholders are notified of the watchdog’s request for more documents. However, a number of shareholders say they did not even receive a note from the BDDK, lawyer Fikret Duran told Today’s Zaman over the phone on Thursday.

“You cannot allow a bank to commence banking operations without the documents that the BDDK alleges are missing in Turkey. … Bank Asya has been operating in Turkey since 1996 and received no such official notification as to its [alleged] lack of documents until this political pressure began last year,” Duran explained. Duran said under normal circumstances, the TMSF should leave the Bank Asya board within a week or so of the required documents being provided.

Observers argued on Wednesday that Turkey may be forced to pay sizeable compensation for the Bank Asya intervention in the future if an international court, such as the European Court of Human Rights (ECtHR), reverses the decision, as has been the case in the past, when Turkey was forced to pay a fine to Süzer Group for bankrupting Kentbank.

Following the domestic banking crisis of 2001, Kentbank was seized by the government and handed over to the BDDK. However, the owner of the bank appealed the decision with ECtHR, demanding that its operating rights be returned and that $4.13 billion be paid in compensation. The ECtHR ruled that the confiscation of the bank was unfair and gave the government and Kentbank six months to reach a compromise to resolve the issue. After some time, Süzer Group agreed, oddly enough, to withdraw from its $4.13 billion suit at the ECtHR, and ended its efforts to obtain a new banking license.

Lawyer Turgut Tavşanoğlu, who defended Süzer in court at time, told Today’s Zaman on Thursday that the banking watchdog’s intervention in Bank Asya has no legal basis. “It appears that the BDDK has gone beyond the limits to abuse its power. The watchdog apparently cites Law No. 8, Article 5, which regulates Turkey’s banking sector, for its takeover of the Bank Asya board. However, that article does not give the watchdog the authority to intervene in a bank over ambiguous reasons such as a lack of documents. We do not know exactly who these shareholders are or what they are lacking,” Tavşanoğlu asserted.

The intervention in Bank Asya comes on the heels of an alleged personal effort by Erdoğan to take down the bank through defamatory news about the bank in pro-government media and separate regulatory restrictions. On several occasions, Erdoğan has made defamatory remarks about the bank, accusing it of failing to manage its funds and even once claiming that the bank had gone bankrupt. With one of the best capital adequacy ratios in the sector, Bank Asya has rejected such assertions. Turkey considers it a crime to defame a bank in a way that may damage its prestige or cause a loss of confidence in it.

On Wednesday and Thursday, loyal Bank Asya customers flocked to branches across the country to support the Islamic lender with new deposits. Bank Asya had more than 1 million deposit-holding customers ahead of Tuesday’s intervention, and that figure is expected to have spiked.

Bank Asya’s capital adequacy ratio stood at 17.35 percent as of June 2014, one of the highest in the sector, and above the Turkish banking sector’s average of 16.3 percent. This figure surged to 18.32 percent on Wednesday, bank sources said, making the bank the strongest privately run lender in terms of capital adequacy ratio.

*Faruk Alan in İstanbul contributed to this report

Fatma Aşkın, a breast cancer patient who was arrested on Feb.14 in the southeastern Turkish province of Gaziantep due to her alleged links to the Gülen movement, has experienced a spread of the disease during her one-month stay in prison and has been diagnosed with stage 4 cancer.