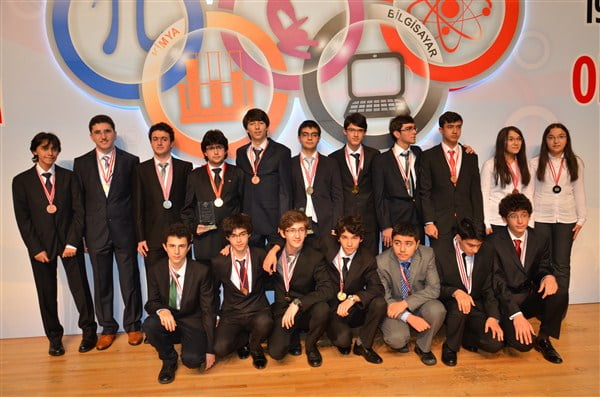 The 120 medals for the 22nd National Science Olympiad and 19th National Mathematics Olympiad were distributed in a ceremony at Ankara’s Congresium by the Scientific and Technological Research Council of Turkey (TÜBİTAK) on Wednesday. TÜBİTAK’s president, Professor Yücel Altunbaşak, distributed the medals to the winners.

Gold medalist in Physics Sıddık Süleyman Kahraman, from Ankara’s Samanyolu College, said the students were well prepared by Samanyolu College’s teachers and have been studying for 10 hours a day for the last two months. Abdullah Enes Öncü, from İstanbul’s Fatih Science College, was the gold medalist in computer science. He said he was awarded a gold medal last year as well because of the good training he received from qualified teachers at his school. Öncü said he passed 50 other students in his category with the training he got at his high school.

The schools’ names were not announced after the winners’ names for the first time at the award distribution ceremony.

Some private schools, Fatih Koleji, Samanyolu, Atlantik and Yamanlar Schools among them, which are affiliated with the Hizmet movement — a faith-based social movement inspired by Islamic scholar Fethullah Gülen — have been targeted by the AK Party and government circles since Dec. 17, 2013, when a massive corruption and bribery scandal became public.

Prime Minister Recep Tayyip Erdoğan accused the Hizmet movement of plotting to overthrow his government. In May, Erdoğan publicly advised AK Party supporters not to send their children to schools affiliated with the Hizmet movement. “We will not even give water to them [Hizmet members],” he vowed. Erdoğan also ordered officials in AK Party-run municipalities to seize land and buildings belonging to the Hizmet movement by any means necessary.