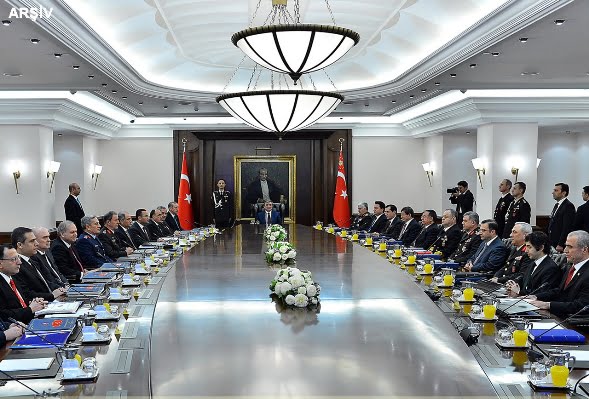 The MGK meeting took place at a delicate and critical time when embattled Prime Minister Recep Tayyip Erdoğan found himself struggling to overcome challenges stemmed from a recent leak of voice recording allegedly revealing Erdoğan instructing his son to get rid of large amounts of money from several houses on the day when the police raided dozens of addresses on Dec. 17 as part of an investigation into allegations of tender rigging and bribery.

The recent graft leaks riveted Turkish people while inflicting a severe damage to the government ahead of critical local polls, which are seen as a confidence test for Erdoğan’s ruling party.

The MGK statement said the council discussed several topics ranging from state of more than 700,000 Syrian refugees who took shelter in Turkey fleeing the prolonged war in Syria, to security measures to ensure fair and transparent elections next month.

The MGK said it also took up the issue of some ‘organizations and structures’ which allegedly pose serious threats to the national security. The reference to ‘structure’ is of crucial importance as the government signaled a crackdown on Hizmet Movement inspired by Turkish Islamic scholar Fethullah Gülen, with claims that the movement has installed a “parallel structure” within the state and acts according to its group interests, a claim which is firmly rejected by the Movement.

Erdoğan portrays graft scandal as a plot by a “parallel structure” led by Movement to unseat him.