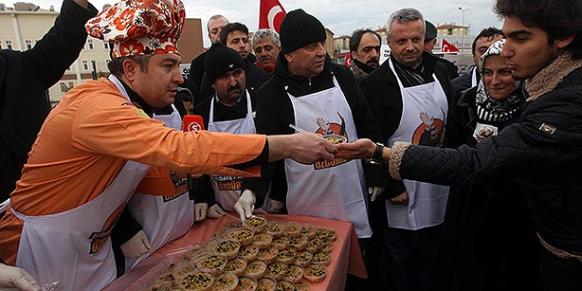 Chef Oktay Usta distributed aşure to those joined a protest in front of the Silivri Prison. (Photo: Today's Zaman)

Many of the protesters told Today’s Zaman why they had decided to come. Standing with the protesters, Today’s Zaman Editor-in-Chief Bülent Keneş said that Turkey’s image is being harmed by the government’s assault on the media, freedom of speech and democracy. Zaman daily Deputy Editor-in-Chief Mehmet Kamış described the gathering as a democratic protest held to fight tyranny and oppression and that people are peacefully raising their voices to protest the illegal arrest of Karaca. Aksiyon weekly Editor-in-Chief and Today’s Zaman columnist Bülent Korucu added that people are gathering at Silivri despite the cold weather to support democracy and freedoms.

Stating that the other branches of government should not interfere with the judiciary, Samanyolu TV news anchor Kemal Gülen said that if judges were to rule according to what they really believe to be true, Karaca’s innocence would be revealed. Gülen added that Karaca should not be accused of terrorism because he has never in his life been involved in terrorist activities. Professor Savaş Genç from Fatih University remarked that the Hizmet movement — a faith-based civil society organization with which Samanyolu and Zaman are affiliated — is known for its peaceful message and yet is being maligned with charges of terrorism. Genç added that the move was neither acceptable nor logical.

Turkish chef and television presenter Oktay Aymelek, who is popular for his kindness, knowledge and liveliness in the kitchen during his shows, was also present at the protest. Aymelek cooked aşure (Noah’s pudding) and distributed it to the protesters in a reference to the Turkish tradition of sharing dessert with others as a sign of unity under one creator and God’s mercy.

Karaca’s wife, Şule Karaca, described her husband as someone who helps others in need and that he has never engaged in any act that could hurt anyone. Stating that people around the world have called her family to express their support, she said, “God willing, this aşure will help achieve our salvation.”

Karaca’s son, Sıdkı, a law student, said that the terrorism accusations directed at his father are comical and baseless. “In today’s Turkey, anybody can be accused of terrorism and imprisoned like my father. Now, there is no guarantee [of the right to freedom] in law,” he said.

Karaca, Zaman Editor-in-Chief Ekrem Dumanlı and a number of other journalists, scriptwriters, producers and police officers were detained on Dec. 14 in a major crackdown on the media. Karaca was subsequently arrested on Dec. 19 on suspicion of heading a terrorist group, based on a TV series that was broadcast years ago by Samanyolu TV. Three former police officers who had been detained were also arrested while the other suspects, including Dumanlı, were released pending trial.