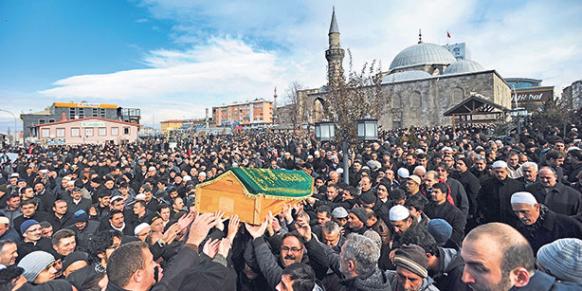 Seyfullah Gülen, the brother of Turkish Islamic scholar Fethullah Gülen, was laid to rest in his hometown of Erzurum. (Photo: Cihan)

Gülen passed away at the private Şifa Hospital in Erzurum, where he had been receiving treatment after a heart attack.

Following the funeral prayer, Gülen was buried in the village of Korucuk in the district of Pasinler, also in Erzurum.

Gülen had been at the hospital due to heart and respiratory problems since suffering a heart attack four months ago. He was admitted to the intensive care unit a month ago after he was struck by partial paralysis. He had been on life support but failed to respond to the treatment given.

Known as Sıbgatullah by his family, he was a retiree who had worked at Atatürk University in the past. He was married and a father of nine. One of his sons is Samanyolu TV anchor Kemal Gülen.

On Friday, Seyfullah Gülen’s younger brother Mesih Gülen said they had spoken with Fethullah Gülen but that they did not expect him to attend his brother’s funeral.

Fethullah Gülen, who inspired the faith-based Hizmet movement which promotes inter-religious dialogue and educational activities, has been living in self-imposed exile in Pennsylvania since 1999 and has not returned to the country since then.

Unable to hold back tears, Mesih Gülen told Today’s Zaman that his children had been expecting him to recover.

Another of Fethullah Gülen’s brother, Hasbi Nida Gülen, died at the age of 66 in October 2012 at a hospital in Ankara, where he was receiving treatment for lung cancer.

The oldest of eight children, Fethullah Gülen has five brothers, the late Seyfullah (Sıbgatullah), Mesih, the late Hasbi (Nida), Salih and Kutbettin. He also has two sisters, Nurhayat and Fazilet.