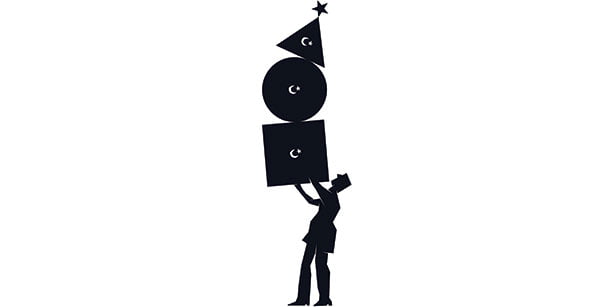 Correspondents from the Zaman and Bugün newspapers, the Samanyolu TV station and Cihan News Agency say they have been banned from the presidential palace since Erdogan’s inauguration in August and no longer receive official press releases.

Erdoğan, whose ruling AK Party has roots in political Islam, accuses preacher Fethullah Gülen of building a “parallel state” of followers in institutions including the police and judiciary in a bid to seize the levers of state power.

Erdoğan says Gülen orchestrated a corruption scandal against his inner circle last year in an attempted “judicial coup,” a charge Gülen denies, and has described the preacher’s “Hizmet” (Service) network as a threat to national security.

The media ban was extended to key ministries including the prime minister’s office and the ministry of foreign affairs a few days after a National Security Council meeting last month, according to journalists from Gülen-linked media outlets.

“This is a war, a fight, an effort to wipe out Hizmet,” said Tercan Ali Baştürk of the Gülen-affiliated Journalists and Writers Foundation, seeing the ban as “punishment” for their news organizations’ coverage of the corruption probe.

The foreign ministry declined to comment but government officials, speaking on condition of anonymity, defended the move.

“The priority of some press institutions is not journalism but serving their political agenda … There are journalists who criticize the government and are still covering it, but the Gülenists had a particular agenda,” one official said.

Erdoğan’s domination of the media, much of it owned by conglomerates with business ties to the AK Party, has pushed Turkey, which is a candidate for membership of the European Union, toward the bottom of global press freedom rankings.

In its October report on Turkey’s progress towards accession, the European Commission raised concerns about press freedom in Turkey and called on the government to “promote dialogue across the political spectrum.”

It also chastised Turkey for interfering in the judiciary following the corruption probe.

Gülen’s network helped cement Erdoğan’s rise, aiding him to curb the power of a military that saw itself as the guardian of the secular state and toppled four governments in the second half of the 20th century.

Its influence in the judiciary was seen as key to the jailing of generals and politicians as the ruling party clamped down on its secularist opponents.

Prominent journalists, including Nedim Şener and Ahmet Şık, were also detained for their work critical of Gülen’s life and influence, prompting an outcry over freedom of the press.

The marriage of convenience between Erdoğan and Gülen has since fallen apart as the former allies turned on each other in a power struggle that burst into the open with last December’s corruption scandal.

“The government is using the same methods the military used in the past … The only thing that has changed are the oppressors and the oppressed. Power has changed hands, but the old limitations on freedom have not,” Baştürk said.

Erdoğan has sought to purge the judiciary and police of Gülen’s influence in the wake of the corruption scandal and has repeatedly called for the cleric’s extradition to Turkey.

The rift has extended to businesses linked to the cleric, most notably Islamic lender Bank Asya, whose shares slumped after state-owned firms and institutions withdrew deposits earlier this year amid what its chief executive has called a “smear campaign.”

Erdoğan has denied trying to sink the bank.

Cihan’s general director, Abdülhamit Bilici, said the media ban was damaging the news agency’s business and threatened legal action.
“It’s financial discrimination,” he told Reuters, comparing the situation to restrictions imposed after a 1997 military coup. “We were on the blacklist then, when it was a military coup.Now we’re having the same from a civilian organization.”