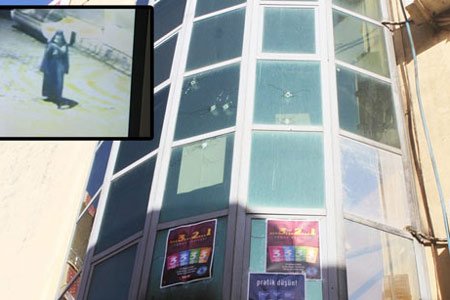 A dershane was attacked by a man wearing woman's clothing with a Kalashnikov rifle in Şırnak province on Saturday, leaving a security guard injured. (Photo: Cihan)

A private institution that offers weekend and evening courses to assist students in preparing for national exams, was attacked by an unidentified person with a Kalashnikov rifle in the southeastern province of Şırnak on Saturday, leaving a security guard wounded.

The attack took place at Şırnak’s FEM Dershanesi around 10 p.m., as students were leaving a night lecture. Eyewitnesses told the Cihan news agency that the attacker was a man wearing woman’s clothing who shot randomly at the dershane building with a Kalashnikov rifle. While no one was killed in the attack, a security guard sustained a shoulder wound and was immediately taken to a hospital.

Police units arrived quickly at the scene and launched an investigation to identify and catch the shooter. Speaking to Cihan, FEM Dershanesi head Fahri Koca stated it was luck no one was killed and added, “Attacking an institution that serves the people of this region clearly shows the aim of attacker. The families of our students and other locals support us. Those who want the people of this region to be behind in education will not succeed.”

In May of last year, a group of around 30 Kurdistan Workers’ Party (PKK) supporters attacked the boy’s dormitory of the private Ufuk High School, which provides accommodation for students of imam-hatip schools as well, with Molotov cocktails after staging a demonstration and barricaded the İdil highway in Şırnak’s Cizre district.

Three students were injured, one of them seriously, while trying to escape the PKK supporters’ attack in panic. The attack on the students led to nationwide outrage.

An investigation into the attack on the dormitory revealed that the attackers had agreed to start the fire at a meeting in a tent set up by the Peace and Democracy Party (BDP) to protest what they felt was the government’s unresponsiveness to Kurdish demands. Seven suspects were detained, one of whom was found inside an election campaign van belonging to Faysal Sarıyıldız, an independent parliamentary candidate endorsed by the BDP. Sarıyıldız is currently in jail as a suspect in the case against the Kurdistan Communities Union (KCK). The KCK is an umbrella network of PKK-related organizations.