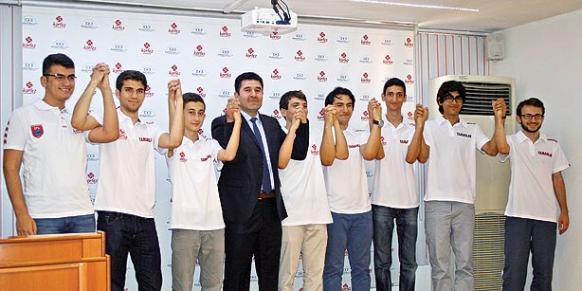 Students at prep schools (dershanes) — privately owned university preparatory institutions that the Justice and Development Party (AK Party) government is seeking to close down — dominated the Undergraduate Placement Examination (LYS) university admission exam whose results were announced on Saturday night.The results of the LYS exam, which was held in five separate sessions on June 14-15 and June 21-22 with the participation of nearly 1 million students, were made public on the Student Selection and Placement Center’s (ÖSYM) website at midnight on Saturday. Ususally, the ÖSYM announces the results with a press conference held during the daytime but this year, the exam board surprisingly released the results online without informing the public beforehand.

Most of the top scorers were students who had prepared for the exam in dershanes, which will not been allowed to operate from Sept. 1, 2015 onward as part of a law introduced by the AK Party government toward the end of last year. FEM, Körfez and Maltepe dershanes associated with faith-based Hizmet Movement (also known as Gülen Movement) dominated top spots in this year’s exams. Ö. Furkan Parmak, who received the highest score in the TM (Turkish-Math)-1, TM-2 and TM-3 categories in the LYS exam, studied for the exam at the Maltepe prep school in Ankara. Speaking to the Cihan news agency, Parmak stated that he owes his success to his high school, the Ankara Samanyolu College, and his dershane. One of the FEM prep schools students, Kerem Çıtak from İstanbul, came first at the exam’s English language category. The other FEM prep schools students who received the highest scores in various categories of the exam are Mustafa Asım Kılıçarslan, who received the highest scores at the category of TS (Turkish-Social sciences)-2 and Taha Niyazi Dutkuner, who came first in the TS-1 category. Fethullah Gülen, a student attending the İzmir Körfez dershane, came third in the TM-1 and TM-2 categories. Sefa Can Medin, a student from a Final dershane, finished first in the categories of MF (Math-Science)-1, MF-2, MF-3 and MF-4 while other students from Final dershanes, Özgür Can Eren and Mustafa Doğa Doğan, received the highest scores in the categories of Dil (language)-1, Dil-2 and Dil-3. Zeynep Bayram from the Uğur dershane came third in the MF-4 category.

In a surprise move, the government decided in November of last year to close down the exam prep schools, stirring a massive debate. With their affordable fees, these schools are regarded by middle- and low-income families as an equalizer of educational opportunities. Although there has been a strong public reaction against the push to close dershanes, the government insists on shutting them down. A bill including amendments to Law No. 5580 on Private Educational Institution was introduced by the government in October of last year and sent to the Parliament Speaker’s Office in February.

The bill was put to a vote and passed by Parliament on March 7 in a session that 90 deputies from the ruling party did not attend, and was signed into law by President Abdullah Gül on March 12.

According to the law, the president of the Board of Education and Discipline of the Ministry of Education and the board’s other members, the ministry’s deputy undersecretaries, general directors, the chiefs of the education branches and the provincial education directors of Turkey’s 81 provinces will be removed from their posts. The law also states that school principals and vice principals who have spent four years or more in their posts will also be removed from their posts. Furthermore, the law also states that dershanes will be allowed to operate until Sept. 1, 2015. All preparatory schools will be shut down after this date.