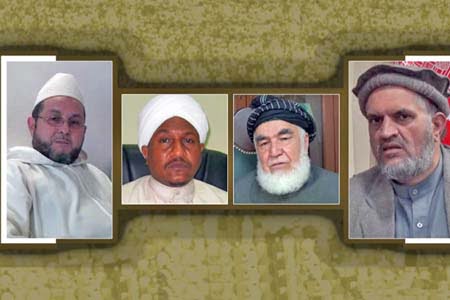 The symposium “Ijma as a Common Roadmap and Collective Awareness” with participations from approximately 80 countries took place over the weekend, on April 27-28, in Istanbul. Earlier last week, several international attendees had given noteworthy remarks in advance of the event.

Among them was one by the Sudanese minister Muhammad Yakuti who stressed that true change in a society can be achieved through conscience and collective awareness. Another scholar, Moroccan Sefik El-Idrisi commented that the Hizmet Movement is carrying out significant activities worldwide to curb ignorance, poverty and disunity. Similarly, the Afghan ministers, Prof. Nimetullah Sehrani and Dr. Yusuf Niyazi, putting emphasis on the role of the symposium said the Turkish schools are offering an unparalleled global service.

The Sudanese guest of the symposium, minister of foundations Muhammad Yakuti further commented that “The schools, with the role models they have been raising, are now addressing the problems of every society. These schools have proved that the true transformation philosophy involves culture, education and role modelling.” Speaking of the essentiality of ijma, “In a world where unmindful crowds flow into streets and sermonize, it is in our hands and duty to raise a collective awareness which is to be fruitful for the ummah’s future” Yakuti said,

According to Yakuti, the change is not possible through politics but through addressing the reason and conscience of communities. “To change communities is not possible with addresses lacking in their feelings” said Yakuti. “When we look at the global occurrences they turn out to be driven and ended by short-lived feelings. In this regard, it is a need and of paramount importance for those having a collective reason and awareness to come together” he said. He also commented that the Hizmet has become a worldwide phenomenon and is functioning along the same lines as the Prophet Muhammad.

Noting that the Hizmet differs from the other movements in that it is community and individual oriented, Yakuti said, “Our Prophet addressed straight the community and their inner worlds. He fulfilled his prophethood duty by offering solutions to their problems. The Hizmet Movement is a Qur’anic movement. In the Qur’an, Allah says: God does not change the condition of a people unless they change what is in themselves.”

Noting that what is distinct in Fethullah Gulen is his ability to realize his thoughts in daily life, Yakuti said, “He integrated the modern sciences with traditional Islamic ones. He elaborated on Islamic sciences, internalized them in his conscience and came before us with nobility and innovations. Speaking of the magazine “Hira”, available in Arabic as well,”Hira is a magazine that the Muslim world is in need of. If the region’s people didn’t want or approved it, it wouldn’t be so well-received” he said.

The Hizmet remedy to the shared enemies

A leading Islamic scholar in Morocco, Sefik El-Idrisi stated that the Hizmet is carrying out remarkable services to curb ignorance, through schools; poverty, through giant economic institutions like Tuskon; and disunity, through a shared spiritual education, love of unity and solidarity and collective awareness.

“Fethullah Gulen, in our master Ferid El Ensari’s words, is the man of our time and the age. He has a nature that uplifts with heralds of good news, embraces everyone by making things easier, but never sends away by making disgust. He is blessed with Divine assistence.” As for the ijma symposium, “The main reasons behind troubles the Muslim world is facing today are disunity in thought and practice, division and disintegration, which certainly harm the Muslim body and make it prone to enemy attacks. Ijma and collective awareness are main factors unifying and managing the Muslim world, so to speak, they are its backbone. There are main foundations organizing this ummah’s life, which are the Qur’an; its embodiment in life, the Prophet’s traditions; ijma and collective awareness” he said.

“The Turkish-Afghan schools should be opened in every Afghan province”

The advisor to the president of Afghanistan, Prof. Nimetullah Sehrani drew attention to the significance of the ijma symposium and said Muslim fraternity is needed more than ever today. Highlighting the historical Turkish-Afghan friendship ties, Sehrani went on to comment “Turkish-Afghan schools form a golden chain to be remembered forever. Islam and science are hand in hand at these schools. We want our Turkish brothers to open schools in every Afghan province.”

Minister of Hajj and Islamic Affairs of Afghanistan, Dr. Yusuf Niyazi, said the ijma symposium contributes to understanding the true Islam. Referring the contributions of Turkish-Afghan schools to the two countries’ relations as ‘unparalleled’, he said, “I was able to witness the magnitude of their service closely when I was once serving as the minister of education. The students from Afghan-Turkish schools won hundreds of medals to their country. Positive thinking lies at the core of these schools. The best politics of our age is this value and to spread it as well. We are observing it in Fethullah Gulen’s thoughts.”

Source: [in Turkish] on Cihan, 25 April 2013. English translation is retrieved from HizmetMovement.Com

MYRA BLACKMON By the time you read this, I will be in Istanbul, as part of a group beginning a week-long tour as a guest of the Gulen Movement. We will visit tourist sites, but also meet with media folks, spend time in schools and universities and enjoy several dinners in private homes. We will […]