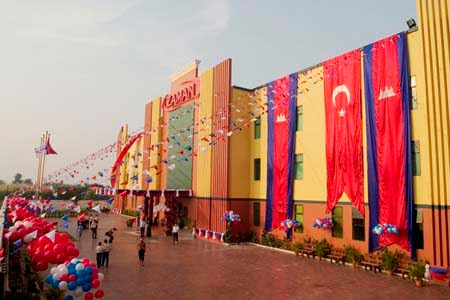 The second Turkish school in Cambodia, an additional campus of the Zaman International School, which began its educational activities in 1997, was opened on Thursday in a ceremony attended by Cambodian Deputy Prime Minister Sok An and Justice and Development Party (AK Party) Deputy Chairman Dengir Mir Mehmet Fırat.

The new campus will initially host 300 nursery and primary school students. The old campus is used to educate 700 high school students. Principal Ali Kökten told Today’s Zaman on Thursday that the Turkish school is among the leading schools in the country and that its team won the bronze medal at the Computer Olympics held last year in Romania.

Having lost hundreds of thousands of its citizens in the American bombardments during the Vietnam War and millions more in the “fields of death” during the Khmer Rouge and Pol Pot period, Cambodia wants to forget its past and open a new page. For this reason, foreign investments are being fostered and opportunities for cooperation exist in all fields, from education to agriculture. Within this scope, Turkish schools have started to operate in the country.

An, speaking at the opening ceremony, congratulated the school executives for the institution’s achievements and said the country expected the opening of a university from the Turkish investors. An toured the school and watched student activities and performances. He also attended some classes and met with Turkish investors who attended the ceremony, telling them that they should start investing in Cambodia.

“Today the world needs love and peace more than ever. This school plants saplings of peace in a field of love. For this reason, I congratulate the teachers, who are the gardeners of peace and tolerance,” Fırat said. Professor Şerif Ali Tekalan, head of the Union of International Universities, said he believed “that the students of this school, which has established a bridge of love between two countries, will work for the welfare and peace of their countries and that of all humanity in the future.”

Civil Servants’ Trade Union (Memur-Sen) Ahmet Aksu expressed his appreciation for the Turkish entrepeneurs’ work. “The Anatolian people went outside and invested in these schools at a time when the state could not do it. Those who plan, undertake and support these services are heroes in the view of history,” he said.

Economic and cultural relations between Turkey and Cambodia were not noteworthy in the past due to a mutual lack of knowledge about each other; however, this changed when the first school was opened, boosting Turkey’s popularity among Cambodians.