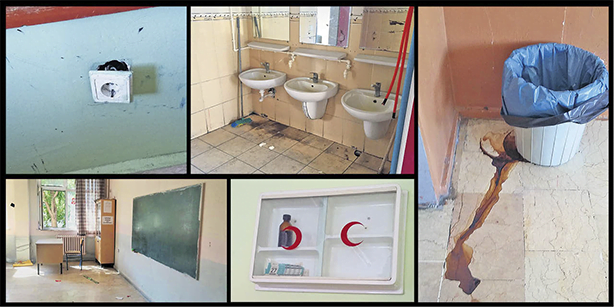 Some of state schools in Turkey (Collage: Today's Zaman)

Ministry of Education Undersecretary Yusuf Tekin recently defended the police raids carried out on private education institutions, claiming that they were “routine inspections.” However, the poor condition of many public schools reveals that they are not subjected to the same inspections as private schools.

Despite inspectors regularly raiding private schools to examine details such as the width and length of stairs and checking noticeboards to find out if they are in compliance with regulations, Today’s Zaman reporters discovered that a number of public schools in İstanbul fail to reach the standards demanded of the raided schools. The reporters inspected various schools around İstanbul and found that most fall below basic standards of hygiene, lack medical supplies and are often in a dilapidated condition, with broken windows being commonplace.

Many classrooms and bathrooms in the Fevzi Çakmak Secondary School in İstanbul’s Gaziosmanpaşa district were seen to be in a very poor condition and the journalists reported that large numbers of electrical sockets were broken and had exposed wires. Some of the school’s windows were also broken and the school’s first aid supplies were insufficient.

Furthermore, both primary and secondary school classes are taught in the same building at Faruk Timurtaş Secondary School in the Zeytinburnu district, which is against the Ministry of Education’s regulations for public schools. The reporters were also unable to open the door leading to the fire escape in Bağcılar’s Kadir Kuş İmam Hatip Secondary School due to its broken handle. The bathrooms in the school were in a poor state of hygiene, with one toilet unable to be flushed and there was no soap.

A number of private and prep schools that are sympathetic to the Gülen movement have been targeted by the Justice and Development Party (AK Party) after a major graft investigation was revealed on Dec. 17, 2013, implicating President Recep Tayyip Erdoğan and other top AK Party figures.

Then-Prime Minister Erdoğan accused the Gülen movement of plotting to overthrow his government. In May 2014, Erdoğan publicly advised AK Party supporters not to send their children to schools inspired by the movement, vowing, “We will not even give water [to those sympathetic to the movement].” He also said he would carry out a “witch hunt” against anyone with links to the movement. Erdoğan has also ordered officials in AK Party-run municipalities to seize land and buildings belonging to those inspired by the Gülen movement by any means necessary. The movement strongly rejects the allegations and no indictment has been brought against it.