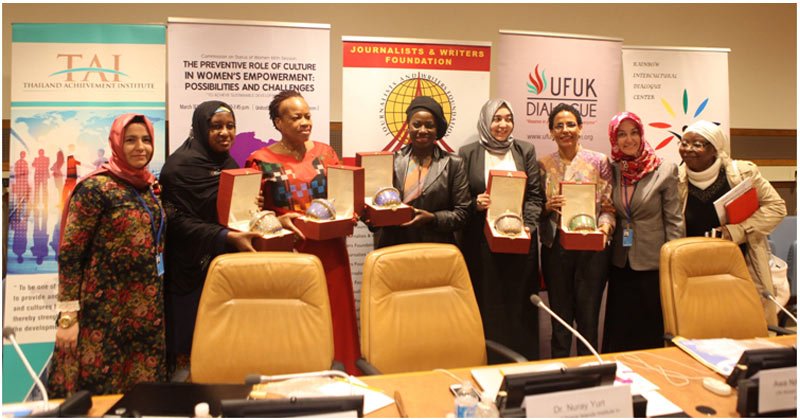 Dr. Nuray Yurt, the Director of Peace Islands Institute New Jersey, delivered a welcome speech and introduced the speakers to the audience. Dr. Yurt said that the impact of beliefs, traditions and cultures could be turned into possible opportunities, which can strengthen women’s empowerment.

The Minister of Gender, Children and Social Protection of the Republic of Liberia, H.E. Julia Duncan Cassell informed the audience on women’s life in Liberia. According to H.E. Cassell, in order to meet the requirements of the Sustainable Development Goal #5, as well as becoming active at the political and social life, it is necessary to accept, practice and utilize local traditions and culture. H.E. Cassell finalized her speech by saying “Women do not only want to be seen, but also be heard. In an environment that provides equal educational opportunities, women can do everything that men can do. Give us the chance to rise at the top!”

Following H.E. Cassell`s remarks, Awa Ndiaye Seck, the UN Women Representative of Liberia, stated that culture is not an obstacle to women, but the way its been used is hindering women`s potential. “We can use culture to strengthen women’s status on financial and socio-economic matters by talking about its advantages and disadvantages. In addition, it is not itself that prevents us from doing what we do, but the way we use it, said Seck.

At the beginning of her speech, Roberta Clarke, the UN Women Regional Director of Asia and Pacific, who is also the Representative of Thailand, called the audience’s attention to the cultural movement: “None of us live the lives of our grandmothers or mothers, but nevertheless women have to face inequalities and discriminations in all areas of daily life.“ According to Clarke, the different approaches, visions, models and roots of each country and their circumstances and priorities should be used to enhance women’s status.

Last but not least, Dr. Sa’adatu Hassan Liman, who is an Associate Professor on Religious Studies at Nasarawa State University, addressed her speech on eliminating violence against women through traditional mechanism from the Nigerian perspective. Dr. Liman said that the key strategy to overcome cultural obstacles that prevent women and girls empowerment is to support their education in order to overcome their lack of educational status. Dr. Liman concluded her remarks by saying that “Why we do not use religion to eliminate discrimination and violence against women and support women’s education and empowerment.

Humanitarian aid organization Kimse Yok Mu? (Is Anybody There?) carried out 500 cataract surgeries in Pakistan, as part of its international campaigns to reach out economically disadvantaged people. Volunteers from the organization arrived in the city of Dera Ismail Khan in July for its campaign to perform cataract surgeries for 5,000 people in the country. So far, around 500 people have undergone surgeries, which bolstered ties between Turkey and Pakistan.