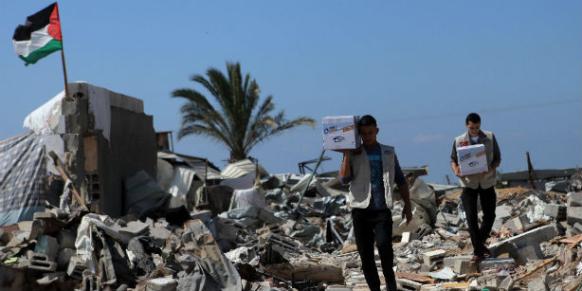 The Kimse Yok Mu charity organized a trip to Palestine along with 71 other countries during Eid al-Adha with its staff and volunteers to reach out to impoverished families and orphans. (Photo: Today's Zaman)

Kimse Yok Mu (Is Anybody There?), a UN-affiliated aid organization based in Turkey and the only Turkish organization that has a large outreach presence in 113 countries, continues to be a direct target of the Justice and Development Party (AK Party) government due to the latter’s hatred of the faith-based Hizmet movement, which inspired the work of the organization.

The AK Party government extended its witch-hunt against Hizmet-affiliated institutions to an aid organization that reaches out to millions of people in need at home and abroad. Kimse Yok Mu not only aims to deliver aid in times of disaster but also to undertake permanent projects to bring solutions to problems facing children and the sick around the world, regardless of ethnicity or religion.

With a decision that caused outrage in Turkish society and among Kimse Yok Mu volunteers, the AK Party revoked Kimse Yok Mu’s right to raise donations without prior permission, which will effectively cripple many activities of the association due to the heavy bureaucracy. As Kimse Yok Mu President İsmail Cingöz told Sunday’s Zaman, due to this decision made without any justification, they are now updating all the content of their website because they will not be able to use the term “collecting help,” such as donations, in their campaigns. Although there has not been a single court decision related to Kimse Yok Mu’s activities during months-long inspections by the state, the government has also ordered Kimse Yok Mu to stop collecting donations by means of text messages.

Describing the treatment of Kimse Yok Mu as “oppression by the government,” Cingöz says that those who will suffer from the crackdown are disaster victims, orphans and handicapped people all around the world. In Turkey alone, there are 300,000 people who receive aid from Kimse Yok Mu. Every kuruş of the aid that is donated for orphans is directly spent for them, without any cuts from administrative costs or other fees. In this way, the donations of people duly find their target. Cingöz notes that he does not have any self-interest in working as the top executive of Kimse Yok Mu as he does it free of charge, like thousands of other volunteers.

Cingöz urges the government to go to court if volunteers have made a single abuse of donations. He says they have applied to the nation’s top administrative court, the Council of State, to stop the execution of the government’s decision. Since Kimse Yok Mu is a globally recognized aid organization affiliated with the United Nations, the Cingöz says this will also raise awareness of the smear campaign targeting the organization around the world.

Although established not long ago with limited resources, in the aftermath of the August 1999 earthquake in Turkey, Kimse Yok Mu has an impressive outreach today in 113 countries. However, rather than delivering aid once in a remote country and then adding this to their list of recipients, Cingöz says they are involved in long-term projects in each country. For example, in Pakistan, they established a town after the flood in the country named after the poet Muhammad Iqbal, Ikbaliye, which was delivered to Pakistanis. The town cost $7 million.

Just during the Eid al-Adha holiday last week, Kimse Yok Mu delivered meat packages to over 1 million people in need with a campaign led by volunteers in 73 countries, from Afghanistan to the Democratic Republic of Congo and from the Philippines to Malawi. In Palestine alone, meat valued at more than $450,000 was delivered to Gaza with the participation of volunteers from Turkey. In an effort to protest the arbitrary sanctions against Kimse Yok Mu, many people in Turkey have joined the group as volunteers to show their solidarity.

Kimse Yok Mu’s outreach not only includes people in remote areas, as some argue. Since the outbreak of the siege of the Kurdish Syrian town of Kobani by the terrorist Islamic State of Iraq and the Levant (ISIL), thousands of Kurds have been flooding Turkey. Kimse Yok Mu also organized aid campaigns for people fleeing the atrocities of ISIL, including Kurds, Turkomans and Yazidis. Over Eid al-Adha, many volunteers also reached the poor in the metropolitan areas of İstanbul and the capital, Ankara. In the nation’s capital alone, meat packages were delivered to 8,500 people.

Although Kimse Yok Mu rushes to offer immediate help in disaster zones, its projects also aim to help victims stand on their own two feet once the first shock of the disaster is over. The families of victims of the Soma mine blast are among the recipients of this help. Since the loss of 301 miners in Soma in May, Kimse Yok Mu has delivered aid in the amount of TL 1.3 million to these families. One hundred and four children have received scholarships to the amount of TL 141,000, while seven families have received help in paying their rent. Kimse Yok Mu has bought houses for six families in Soma, for one in Kınık/İzmir and for two others in Balıkesir, which made up the majority of the aid. Two families received TL 7,000 to cover their credit card debts. However, some families reportedly refrained from posing with Kimse Yok Mu officials and from receiving aid because they were scared of not receiving their legal benefits from the government after accepting help from Kimse Yok Mu.

Cingöz emphasizes that despite all the pressure and efforts to curb the functioning capability of Kimse Yok Mu, the aid association is continuing to work. In the days to come they plan to run a volunteer membership campaign. What Cingöz and many other volunteers find ironic is that the same government that granted Kimse Yok Mu a highly honored medal for its services in 2009 is now doing everything in its power to shut it down out of political motivations. Kimse Yok Mu has also received similar honorific medals from countries such as Peru and Somalia.

Africa is one of the continents where Kimse Yok Mu is at its most active. In addition to digging wells and performing cataract operations — 93 percent of which took place in Sudan — which improve the lives of millions in several countries across Africa, Kimse Yok Mu has also built hospitals in Somalia, Uganda, Kenya and Ethiopia. Cingöz says that cataract surgery not only gives vision to a human being but also saves the lives of many others in the family who have to assist the person without vision.