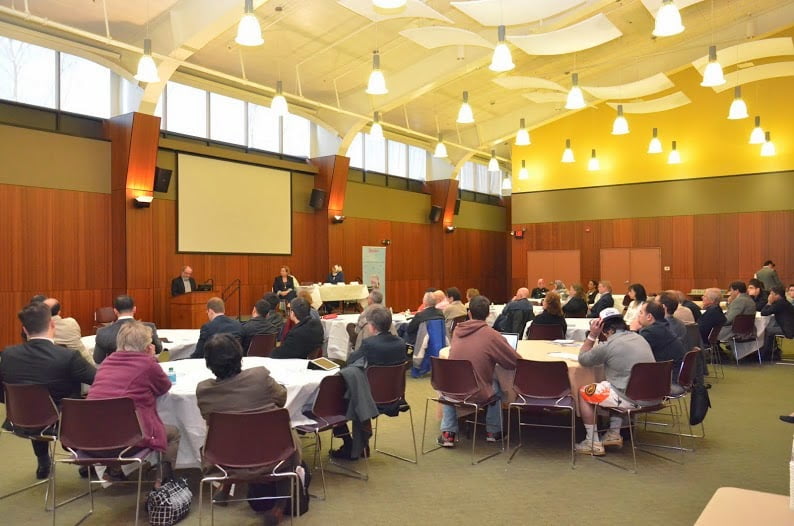 Last Wednesday, we appreciated the beauty of spring better than ever and this was one of those time “when beauty whispers to the heart.” It was the motto of a very meaningful interfaith conference organized by Peace Islands Institute in Connecticut, Sacred Heart University and Fountain Magazine. Our distinguished speakers discussed the concept and expression of “Beauty” in Abrahamic traditions from two perspectives: nature and art.

The conference started with the welcoming speeches of Fr. Anthony Ciorra from SHU and Hakan Yesilova from Fountain Magazine.  The first panel moderated by Prof. Marie Hulme was on how the beauty of nature is observed and appreciated in Judaism, Christianity and Islam.

Rabbi Suri Krieger shared her insights from Jewish perspective. She exemplified ‘tree’, which is a common symbol in stories of several prophets, and Torah itself referred as the ‘tree of life.’ Then Prof. Michael Higgins explained us how important stewardship is in Christian understanding and he related this awareness to Noah. He referred nature as “God’s ongoing act of love.” The final speaker of the first session was Dr. Ayse Kubra Coskun and she gave examples of how Muslims see the acts of the Divine reflected on every being in the universe. She also shared the perspectives of three great Islamic scholars: Rumi, Ibn-i Arabi and Beduizzaman Said Nursi. Dr. Coskun concluded her talk with verses from Qur’an.

After the dinner and we watched short videos on Peace Island Institute and Fountain Magazine. In second session moderated by Fr. Anthony Ciorra, our distinguished speakers Rabbi Suri Krieger, Prof. June-Ann Greeley and Imam Ibrahim Sayar shared their perspectives on how the Jewish, Christian and Islamic beliefs are expressed through art forms. This night full of beauty was concluded with questions and answers. (Click the link: Abraham’s Table: A History of Jewish Muslim Relations)