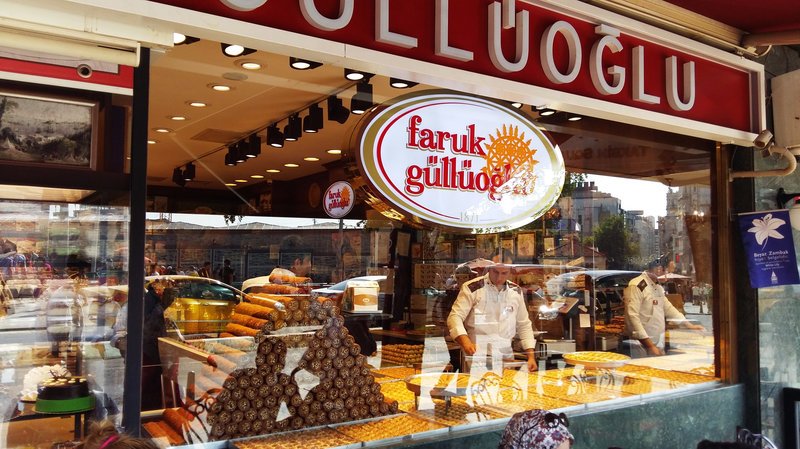 A popular Turkish baklava shop, Faruk Güllüoğlu, is one of nearly 1,000 companies expropriated by the Turkish government since last year's failed coup. The company is now run by a government trustee. Lauren Frayer/NPR

At the Istanbul carpet shop he manages, a salesman named Abdullah flips through a stack of rugs, showing them off to a customer.

He ignores another pile of carpets rolled up in the corner. They’re the Pierre Cardin brand — until recently, a coveted brand in Turkey. But they’re on discount now.

So is he. Abdullah doesn’t want NPR to publish his surname. It shows how scared Turks are. Any connection to banks or companies the government says are linked to last year’s attempt to topple the rule of Turkish President Recep Tayyip Erdogan can get you in trouble.

Last summer, police raided the Istanbul headquarters of the Aydinli Group, a big textile company licensed to make Pierre Cardin merchandise in Turkey. The government alleges it was connected to the coup conspirators. Turkish TV showed the company’s chairman being led away by police. In January, he was replaced by a government trustee.

Since then, Abdullah says he’s had trouble getting orders and payments on time.

“So I canceled my contract with them,” he says. “I don’t want to be involved. I’ve got plenty of other brands of carpets I can sell.”

Over the past year, the government has expropriated nearly 1,000 Turkish companies — from carpet makers to TV stations to a popular brand of baklava. Most of them are accused of having ties to Fethullah Gulen, a cleric the government accuses of infiltrating the state with his followers, and masterminding last year’s coup plot. Gulen lives in the U.S. and denies any role.

Most of the companies taken over by the government also deny any role or connection to Gulen. But they’ve had their assets seized and employees fired.

“Law and order and due process have been completely suspended,” says Atilla Yesilada, an economist with New York-based Global Source Partners, a management and financial consulting firm. “The owners — shareholders — never had their day in court.”

Total assets of all the companies expropriated by the government amount to less than $15 billion, compared to Turkish GDP of about $850 billion. So it’s a small fraction of the total economy, but enough to frighten foreign investors, Yesilada says.

Foreign investment is down by half compared to this time last year. All three ratings agencies have downgraded Turkish debt to junk status in recent months.

“Your assets will be raided, and they will have diminished values. Your employees will be fired, and your patent rights will be sold,” he says. “This is such a huge risk, that companies with decent prudential rules, external auditors, risk management consultants — will not do business in Turkey.”

Small local businesses don’t have a choice. So to them, the government has offered relief. It cut sales tax, albeit temporarily, and is guaranteeing bank loans, to keep credit flowing.

“My business is great. We’ve benefited from the government’s tax rebate,” says Shafik Ercan, who has run an appliance and kitchenware shop in Istanbul for 50 years. “Our sales are up about 20 percent this year.”

The stimulus appears to be working. The Turkish stock market is near an all-time high, and the economy grew 5 percent in the first quarter of 2017. That’s better growth than any European country so far this year.

But the sales tax rebate expires in September. Turkey’s budget deficit is widening. The government is not likely to be as skilled at making carpets or baklava as the founders of those companies it seized.

The economist Yesilada predicts the government will have to sell off these businesses. That’s likely to trigger lawsuits that could last years.

Meanwhile, Abdullah the carpet salesman is stuck with stock he can’t sell. The baklava chain, Faruk Güllüoğlu, tweeted a message to customers after it was taken over by the government:

“For five generations, our company has passed from father to son, since 1871. Now we proceed, under new management.”