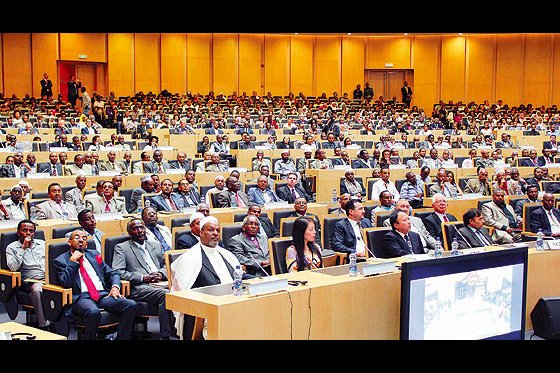 About 2,500 academics and top state officials gathered in a symposium on the Hizmet movement and the concept of dialogue held in Ethiopia on Wednesday. (Photo: Today's Zaman)

An international symposium on the Hizmet movement (aka Gulen movement), which includes followers of Islamic scholar Fethullah Gülen’s principles, and the concept of dialogue, held in Ethiopia last week, brought together a large number of academics and top state officials from close to 40 countries to share their views regarding the motives and practices of the movement.

The symposium, jointly organized by the African Union Commission (AUC), International Necaşi Turkish College and the Inter-Religious Council of Ethiopia on May 28, 2012, played host close to 2,500 attendees in the African Union’s newly built headquarters in the capital city of Addis Ababa.

Expressing his contentment with the large attendance and interest in the symposium, the representative of the African Union, Salah S. Hammad, said the fact that a large crowd full of international observers and members of the press was present at the program is proof of how important the event is. “And also it is meaningful that the program coincides with Africa Day, when our hopes for seeing the whole African continent living together in peace hits a peak.” Africa Day is annually celebrated on May 25, commemorating the 1963 founding of the Organization of African Unity (OAU), the African Union’s successor.

Islamic scholar Gülen also sent a message to the symposium, saying that the speakers and participants in attendance from African, Asian and American countries are not only helping to contribute to mutual tolerance and maintenance of cultures, which is the leading message of the symposium, but are also contributing to the Hizmet movement’s aim of global peace. “Thanks to your precious efforts and true sincerity, I have more hope in seeing different cultures and civilizations blend into a harmonious configuration.”Starting his speech with the question of “Have you ever thought about why so many young Turkish teachers leave their country and come to Ethiopia to found a school, and about the philosophy behind this move,” Georgetown University professor and former Secretary of the Vatican Secretariat for Interreligious Dialogue Thomas Michel focused on the motives, aims and achievements of the Hizmet movement. He said at the core of the movement lies the culture of co-existence and dialogue. “We have three common enemies: poverty, ignorance and contention,” he said. “Schools founded by the movement across the world aim to bring solutions to these three problems.”

Ethiopian minister: Hizmet signals the start of a new era

Another speaker at the event, Ethiopian Federal Affairs Minister Shiferaw Teklemariam, said the program is very meaningful as it brings representatives of various cultural and religious groups together in Ethiopia. “I find these Turkish schools and their education system to be very successful. These schools have a multi-cultural structure and a culture of co-existence is strongly supported despite the differences. As we all know, today’s major problems are all about contention, discrimination and radicalism; but this schools’ philosophy suggests and teaches the opposite concepts; tolerance, harmony and moderation. I think this philosophy of the movement signals the start of a bright new era,” the Ethiopian minister said.

Teklemariam, further, said that his knowledge of the movement is based on some books about the movement and some of Gülen’s books he has read and his observations when he visited the movement’s schools in Turkey.