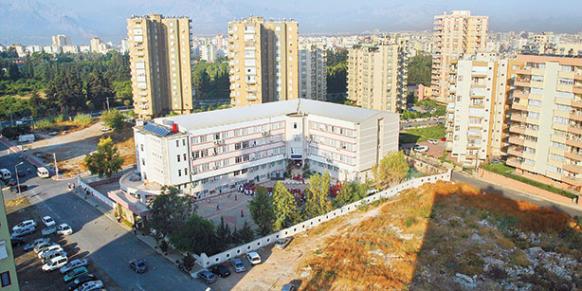 A Hizmet-affiliated school that has been subject to the change in school zoning plans is seen in Antalya province in this Aug. 12 file photo.(Photo: Cihan)

Erdoğan, who was prime minister at the time, told those present at a meeting of Justice and Development Party (AK Party) mayors to take back land and buildings given to Hizmet-affiliated institutions.

“I want to you take back each and every piece of land and building given to them [Hizmet], within the boundaries of law and democracy,” Erdoğan said.
Hizmet and Turkish-Islamic scholar Fethullah Gülen have been direct targets of Erdoğan ever since a corruption probe in which some senior members of the government were implicated became public on Dec. 17 of last year. Erdoğan, who refers to Hizmet as the “parallel state” or “structure,” accuses the movement of being behind the corruption operation.

Erdoğan’s government has taken action to ensure the closure of schools opened by Hizmet followers in many countries around the world. Hizmet-affiliated institutions and schools in Turkey are also under intense pressure from the government.

Complying with Erdoğan’s call, the Antalya Metropolitan Municipality, which is run by the AK Party, recently decided to change the status of land in the Uluç neighborhood from “private educational facility” to “secondary school area.” The area belongs to the Hizmet-affiliated group Toros Educational Institutions, which has yet to build any kind of educational facility on the land.

The municipal council also approved the zoning plan change to an area belonging to the private Toros Primary and Secondary School in the Muratpaşa Meydan Kavağı neighborhood. The zoning plan of the school was changed to an “official school area.”

Toros Educational Institutions have objected to the municipality’s plans to change the zoning of the school area in Uluç, saying that the municipal council’s decision is groundless and unlawful.

In its objection, Toros said it was Antalya’s current mayor, Menderes Türel, who approved the area being given the status of “private educational facility” during his first term in 2005.

During Thursday’s meeting, the council discussed Toros’ objection and referred the plans about the change of the zoning plans of the schools to the Zoning and Public Works Commission. The municipal council will make its final decision on the zoning plans once a report on the matter is prepared by this commission.

During the meeting, Mayor Türel, who approved the zoning-plan change to the Hizmet affiliated schools, seemed to contradict his professed intention to be acting in the best interests of the province’s education system when he defended his decision to transfer the dormitories belonging to the Antalya Metropolitan Municipality to the Foundation of Youth and Education in Turkey (TÜRGEV), which is at the center of the Dec. 17 corruption probe and is battling against serious allegations of bribery and irregularities within the foundation.

When a Republican People’s Party (CHP) official criticized Türel for taking such a move without the knowledge of the municipal council, Türel said he took such a step based on his authority to form agreements with foundations and organizations that work for the public good, adding that he would inform the council later on.

Türel said that TÜRGEV is an organization working for the public good and that he is very happy to form an agreement with the institution.

President Erdoğan’s son Bilal is an executive board member of TÜRGEV.

Although the Toros schools are currently the target of the Antalya Metropolitan Municipality, one of the schools posted an inauguration photo in its website showing Türel, Kepez Mayor Hakan Tütüncü, Antalya AK Party provincial chairman Mustafa Köse and AK Party Antalya deputy Gökcen Özdoğan Elçi. The caption of the photo reads: “We give the best education to the best. Toros Education Institutions, which have served the people of Antalya since 1997 with academic and cultural successes, social facilities, Olympiad and project works, continue to be the pride of Antalya.”

The closure of two Hizmet-affiliated schools in Bolu followed similar moves in other parts of Turkey. In early June, the İstanbul Metropolitan Municipality stopped the construction of an education complex on privately owned land on the pretext that the land would be used as a green area and meeting point in the event of an earthquake. The municipality, however, failed to obtain the required approval from other authorities in the province to halt the construction of the education complex. They said the complex belonged to Fetih Eğitim İşletmeleri (Fetih Educational Operations), which has close ties to the Hizmet movement.

In the meantime, two dormitories for male students in the Black Sea province of Rize have been closed down without warning in line with inspection reports approved by the governor’s office. The Private Mehmet Ali Bey Dormitory and the Private Serhat Yüksek Dormitory were affiliated with the Hizmet movement. The managers of the dormitories said although there are more than 30 dormitories in the province, only these two were closed and that the move came following an order by Rize Governor Ersin Yazıcı.