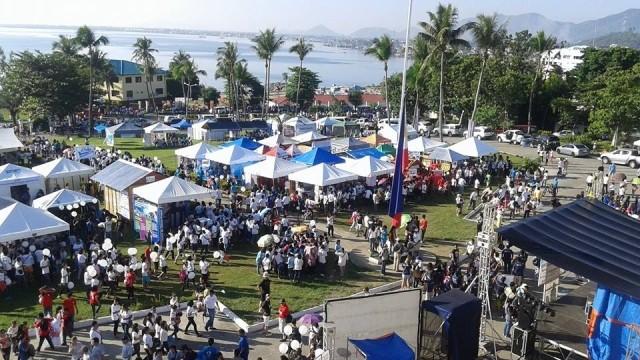 The foundation has continuously assisted the region in a heart wrenching condition throughout the past one year. In the commemorative ceremony, those coming from all over the country lit candles and prayed in honor of the victims. The local aid organizations, governor’s staff alongside Tacloban people gathered outside the governor’s building and showed their support for the renovation and reinforcement efforts going on in the city.

The deputies and governors in the region briefed the efforts underway in Tacloban for the past one year and thanked aid and relief organization including KYM for their rescue efforts and permanent aid activities.

The Haiyan Typhoon had earlier hit Tacloban city along with the Leyte and Samar islands in Nov. 8, 2013, leaving about 10 thousand dead and 1,5 billion worth of damage.

Kimse Yok Mu recently distributed the Ramadan aid donated by Turkish people in tin house neighborhoods of South Africa. Children were too overjoyed by candy and balloon treats distributed as a part of the aid under the auspices of Johannesburg Horizon Turkish School. In addition to the aid packages for tin house neighborhoods, some five hundred locals are being hosted daily at iftar dinners at ground level halls of Nizamiye Mosque.