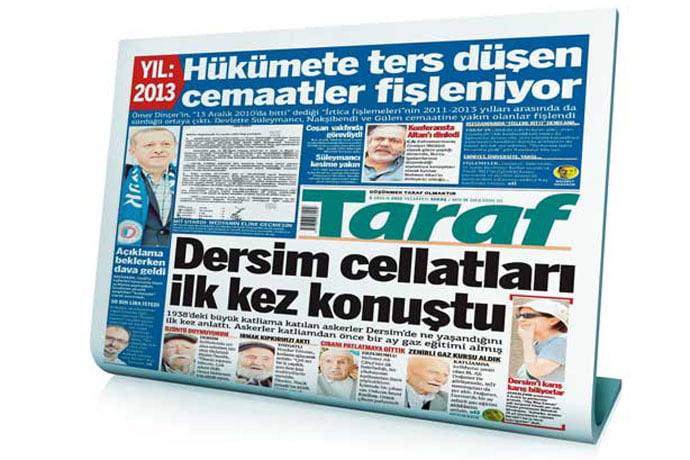 The Taraf daily reports that Turkish government profiled some faith-based groups until 2013.

The Turkish government profiled a large number of individuals whom it believed to be followers of certain religious and faith-based groups and monitored their activities up until 2013, a Turkish daily reported on Monday.

According to the report, the profiling of individuals did not end in 2010 as previously claimed, but it continued between 2011 and 2013. Those mainly profiled are reportedly followers of Hizmet, a faith-based movement inspired by Turkish Islamic scholar Fethullah Gülen. The daily also claimed that other religious groups that voiced criticism or disapproval of the government’s activities were also profiled, mainly civil servants or those who planned or hoped to be employed in a state post.

Monday’s report is part of a series of leaks the Taraf daily has published in the past few days revealing a National Security Council (MGK) document that asks the government of Prime Minister Recep Tayyip Erdoğan to curtail the activities of Gülen, both in Turkey and abroad. The document, endorsed in 2004, was signed by a number of officials, including Erdoğan, then-Foreign Minister Abdullah Gül and then-Justice Minister Cemil Çiçek.

Shortly after the leaks, senior AK Party member Ömer Dinçer, who served as Prime Ministry undersecretary in 2004, said the MGK decision was not implemented and that the document Taraf published was a remnant of the previous government, which was determined to fight against “reactionary religious activities.” The Justice and Development Party (AK Party) formed its first government in 2002. Dinçer also said the government headed by Prime Minister Mesut Yılmaz after the Feb. 28, 1997 postmodern coup drafted an action plan to monitor and fight against religious groups, including Gülen and the Hizmet movement. To coordinate and implement this action plan, the government established the Prime Ministry Implementation Monitoring and Coordination Council (BUTKK). According to Dinçer, the council was abolished in 2010.

The Taraf report, however, claimed that the government set up a new department at the Prime Ministry in lieu of the BUTKK and that that department blacklisted people between 2011 and 2013.

The 2004 MGK document demands that the government, in coordination with the Interior Ministry, Foreign Ministry, Education Ministry and National Intelligence Organization (MİT), monitor and curtail Gülen’s activities. The document required the government to closely monitor private schools, student houses, foundations, associations, dorms, domestic and foreign activities and Abant conferences that are linked to the Hizmet movement.

Other religious groups followed and profiled were the Süleymancı and Nakşibendi sects. The profiling activities were carried out by MİT. Lists of profiled individuals were submitted to the Prime Ministry through official correspondence. MİT noted in the correspondence that the lists were confidential and that “various complications” might come up if they were obtained by the media.

According to the Taraf report, many individuals were blacklisted for various reasons, such as making Eid al-Adha donations, reading Risale-i Nur, a multiple-volume commentary on the Quran, staying at dormitories owned by religious groups or just on the suspicion that those individuals may be linked to religious groups.

Among profiled individuals are civil servants, academics at universities, businessmen, lawyers and district governors. Those blacklisted also include individuals who attended private educational institutions, including both regular schools and prep schools, who are “suspected of having links to reactionary activities,” as well as residents of private university dorms owned and run by those institutions.

Also on Monday, Defense Minister İsmet Yılmaz spoke to reporters and denied Taraf’s claims. He said individuals and institutions were not blacklisted or monitored as the government has never taken any action in line with the 2004 MGK document. “Many regulations and laws have been adopted [in Turkey’s history], and many of them have not been implemented. Thus, we should not pay heed to some claims,” the minister stated, in reference to blacklisting claims put forward by Taraf.

Erdoğan has yet to make any remark on the document, which also bears his signature.