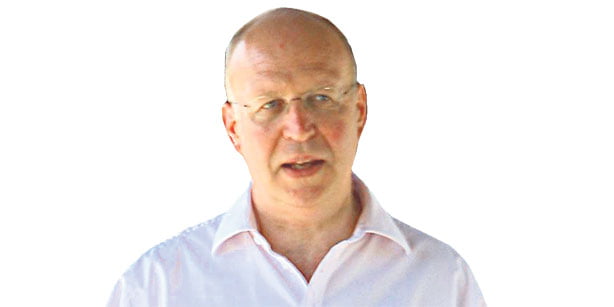 Prime Minister Recep Tayyip Erdoğan does not seem to understand the importance of the paratonern of powers, a “cardinal principle of the Copenhagen criteria” that Turkey as a candidate to join the European Union professes to meet, a senior member of the European Parliament has said.

Andrew Duff, a Liberal Democrat member of the European Parliament, also accused the prime minister, whom he said was “clearly elected democratically,” of not ruling democratically.

“The principal worry we have is that the separation of powers, which is the basic principle of liberal democracy, of a constitutional government is no longer respected in Turkey,” Andrew Duff, a Liberal Democrat member of the European Parliament, said in an interview with private Samanyolu Haber television, aired at the weekend. “And I suspect that it is a thing he himself does not grasp.”

Duff’s remarks came as the European Parliament prepares to vote on a report that criticizes Turkey on drawbacks in freedom of media, excessive violence by the police against last summer’s Gezi Park protesters and, perhaps most notably, on a series of legislative measures the government has taken in the wake of a major investigation into allegations of corruption against politicians and businessmen in his close circle.

The report’s criticism reflects growing concern among European supporters of Turkey’s membership into the 28-nation bloc over what critics say are the authoritarian tendencies of the government as Turkey prepares for an election marathon throughout the coming year. Duff himself has been a staunch supporter of Turkey’s accession into the EU, but the Liberal politician voiced strong concerns about the fate of the Turkish membership process, saying in recent remarks that he would be surprised if the accession talks with Ankara are not suspended this autumn.

When the corruption probe erupted with a wave of detentions including of three sons of ministers, on Dec. 17, the government responded by reassigning thousands of police officials, hundreds of judges and prosecutors and subsequently by pressing for controversial legislation to expand government control over the top body in charge of judicial appointments, the Supreme Board of Judges and Prosecutors (HSYK), and the Internet.

The European Parliament report expresses “deep regret” at the post-Dec. 17 developments and urges the government to “refrain from any further interference in the investigation and prosecution of corruption.”

Duff described the post-Dec. 17 developments as a “crisis of the state” and even though it is not a surprise given the fact that there were great tensions between Erdoğan’s Justice and Development Party (AK Party) and some state institutions for a while, “the scale and ferocity of the things that have occurred since just before Christmas have been astonishing.”

When reminded of a Jan. 21 visit by Erdoğan to Brussels, during which he had talks with a delegation of European Parliament members, Duff revealed that the meeting failed to resolve differences. “Yes, we had a polite exchange of opinions when everyone managed to control themselves, including him,” he said. “But I don’t think he actually fully understood what we were trying to say to him.”

“He clearly has been elected democratically, but I fear that he is not ruling democratically, which means you have got to not only seek to please the supporters that you have but have also got to govern on behalf of the country as a whole, which includes those who did not support you. And I think that ever since 2011 especially, but possibly beforehand, he is showing signs of nervousness about the opposition, which is simply not justified by the facts of the matter,” Duff went on to say.

Responding to Turkish accusations that the EU is having “double standards” in criticizing the HSYK law, Duff said the European practices regarding the appointment of judges and prosecutors may be different from one another, but they all are based on the principle that the power of the executive branch of the state is constrained by autonomous professional legal organizations.

“There is a balance of power which in Turkey, with the changes that are being brought into force now, seems to have been breached. The power of the ruling party to appoint, to sack, to move judges from one case to another is too great,” he said of the new legislation, adding: “I feel disappointed. I think that the sight of Turkey going into reverse is disappointment.”

Asked if he thinks the corruption allegations are being covered up — thanks to the reassignment of the police officials, judges, prosecutors and the legislative measures — he said: “I would like to say no to that. But we don’t know. The fact is that it is so opaque and obscure and the allegations are wide, that we would like to know the truth.”

Enraged by the corruption investigation, Erdoğan accused Turkish Islamic scholar Fethullah Gülen‘s Hizmet movement and its unspecified international collaborators of plotting against his government, describing the probe a “coup attempt.”

Duff said the aggravated language that exposes serious rifts between the AK Party and the Gülen movement risks destabilizing Turkey, noting that the European Parliament is trying to follow the crisis as closely as possible and to “draw appropriate conclusions.”

Asked to comment on the prime minister’s rhetoric presenting the corruption probe as a coup attempt by domestic and outside forces, he said: “But it is not. Of course as an elected politician myself, I distrust, dislike and sometimes have to combat my opponents. But if you descend into realm of coup d’etat or plots, you expose yourself to be accused of being fairly out of touch with reality.”

The British politician also said the prime minister seems to include the European Parliament, which he said Erdoğan “clearly despises,” among the foreigners involved in the alleged plot against his government.

Commenting on Erdoğan’s accusations against the Hizmet movement, Duff said the prime minister was “very keen to instrumentalize the Gülen movement when it suited him, when he wanted to have a crack at the army, deal [a blow to] the Kemalists, deep state, but after the Hizmet served its purposes for the army, he turned on it as a rival power.”

Asked to comment on the “parallel structure,” a term coined by Erdoğan to refer to sympathizers of the Hizmet movement within the judiciary and the police, Duff said he has been asking people to describe it to him, in vain. He recalled a recent meeting with Justice Minister Bekir Bozdağ in Brussels, in which he asked what parallel structure stood for. “There was no answer. Apart from the fact if public servants receive instructions from outside Turkey, they have to be penalized, which is fair enough,” he said.

But he stressed that it would not help the Europeans understand the matter if ministers decline to frankly discuss the Hizmet movement while the prime minister “sounds off all the time in extremely colorful language about Hizmet.”

He described Erdoğan’s rhetoric against Hizmet, which has included denigrating words such as “virus,” “hashashin,” or “leech,” as “the language of the school playground” and stated that such language should provoke Fethullah Gülen and his followers to do more to explain themselves and become more transparent.

Duff was one of the parliamentarians who tabled an amendment to the European Parliament’s report before it was taken up at a committee last week, which called on the Hizmet movement to increase transparency. The parliamentarians voted against the amendment proposal at the Committee on Foreign Affairs, but Duff said in the interview that he and his colleagues were tabling a similar amendment proposal for the report’s planned debate at the European Parliament this week.

“At present it [the European Parliament] is silent and I think it is crazy to have in Turkey this great furor going on between Gülenism and the AKP on the one hand and for the European Parliament to be completely silent about that on the other. I think that disturbs our claim to be credible,” he said.

Gül and Erdoğan different in style, not in policy

President Abdullah Gül, who has disappointed many liberals at home and in Europe by approving controversial legislation expanding government control over senior appointments in the judiciary and over access to Internet, is friendlier in style than Prime Minister Recep Tayyip Erdoğan but, in policy, the two men are not different from each other, according to a renowned member of the European Parliament.

“I have respected him, but I haven’t thought him any less of an AKP [the Justice and Development Party] person than the prime minister,” British liberal Andrew Duff said in an interview aired on private Samanyolu Haber television at the weekend. “He is more approachable, he speaks English well, and he has had more experience of us the Europeans than the prime minister. But if anyone thinks of Abdullah Gül as a progressive liberal I think they are mistaken.”

Asked if he meant Gül and Erdoğan are not different from each other, he said: “I think in policy, yes. In tone, style, no.”