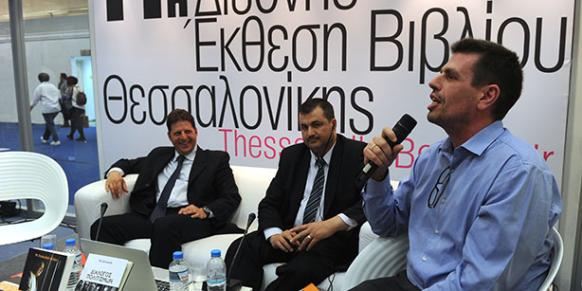 “[Hizmet] is not a gang; [it is] a movement,” said Sotiris Livas, a professor on the Middle East and Turkey at Ionio University, on the sidelines of the 11th International Book Fair held in Thessaloniki.

Gülen, a scholar inspired by Sufism, was also greatly motivated by Turkish-Kurdish scholar Said Nursi. “He is a person who possesses a new-age intellectual character. His approach is to [have] friendly relations in [his] contacts with the West. He stresses that Islamic, moral and traditional values [can] be [upheld] along with modern developments as well,” Livas said.

A book written by Gülen was introduced to the Greek public at the fair. Titled “Love in Human Essence,” it was introduced alongside a book authored by American academic Jill Carroll called “A Dialogue of Civilizations: Gulen’s Islamic Ideals and Humanistic Discourse.”

Journalists and Writers Foundation (GYV) Secretary-General Hüseyin Hurmalı, who also attended the event, said the Hizmet movement places importance on understanding people, not discriminating against them. “The movement is faith based and is a civil community that aims for a culture of togetherness,” Hurmalı said. Summarizing the Hizmet’s solution method for global problems Hurmalı said that the movement strives for understanding through education against illiteracy, economic development against poverty and dialogue against division.

Answering a question from a member of the audience, Hurmalı said Gülen has clearly and several times underlined his support for democratic rule. Gülen and his teachings are healing the Muslim community and he is not encouraging Islamic politics like Prime Minister Recep Tayyip Erdoğan, terrorist leader Osama Bin Laden or Palestinian group Hamas.

Addressing another attendee’s question, Hurmalı said: “If you look at what Gülen wrote 40 years ago and what he has recently written, you will see that there is no difference. He talks about universal principles based on democracy and human rights. Politicians and officials who are coming closer to these principles have been thought of as walking on the same path together with Gülen. In fact, Gülen is on the right path. When [Turgut] Özal, [Süleyman] Demirel, [Bülent] Ecevit or Erdoğan remained close to these principles, they were working in cooperation with Gülen and his Hizmet movement.” He emphasized his belief that Erdoğan changed after his second term in Turkey.

Noting that the developments in Turkey also concern Greece, Dimitris Keridis, the director of Navarino Network, a public policy think tank in Thessaloniki, said, “Gülen is one of those rare people who is building a bridge between modernity, free market, technology and science.”

Keridis also said he cannot accept what he says are “nonsense” written about Islam, underlining that Gülen is one of those scholars who supports reconciling Islam with modernity. Keridis said Islam is a way of life which is followed by 1.5 billion Muslims in the world. Islam is not a religion whose so-called representatives abducted school girls in Nigeria.

Islamic group Boko Haram kidnapped schoolgirls at a boarding school in northeastern Nigeria last month, bringing international attention to the extremist group amid outrage that most of the girls have not been rescued.