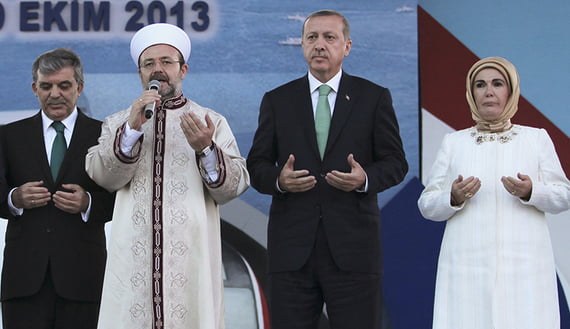 On May 3, the head of Diyanet (the Religious Affairs Department) Mehmet Gormez attended the panel “Youth Forum on Attachment, Transformation and the Future” organized by the Diyanet Foundation’s Women, Youth and Family Center (KAGEM) and the Political, Economic and Social Research Center (SETA).

What would have been a routine gathering made headlines because Gormez said, “Today’s youth perceives the previous generation’s world as limited and unacceptable. We must acknowledge their perceptions and find a new language to approach them. They resist intervention into their private lives. For example, they ask us if earrings (for men) and tattoos are acceptable. We need to step away from inflexibility and approach them rationally.”

This was quite a surprising statement from Gormez and was received positively by liberal pundits. A prominent columnist from the daily Hurriyet, Ahmet Hakan wrote, “I have criticized Gormez many times, but now he spoke up and stated there is no need to meddle with anyone’s beard, tattoo or looks. Now I say: This is super, perfect, magnificent.”

Not everyone appreciated Gormez’s words. For example, Yeni Akit, an ultra-conservative daily, in a harshly worded statement said, “If Ahmet Hakan is referring to Gormez’s statement as superb, Gormez must evaluate and revise his words.”

The Religious Affairs Directorate operates under the Office of the Prime Minister. Its budget — which has been growing exponentially over the last decade — for 2014 has reached almost 5.5 billion Turkish lira (just under $3 billion). To put it in perspective, its budget ranks above 37 ministries’ budgets, and is larger than eight ministries’ budgets combined. The number of its personnel has gone up from approximately 74,000 to 141,000 in the last decade.

The directorate is seen as the ultimate authority for Sunni Islam to assign imams and other personnel to all mosques, both domestically and internationally. Even the Friday sermons are written by the directorate. The directorate’s network is wide and dense wherever “Turks reside.” A retired scholar of theology told Al-Monitor that he had observed, during the election campaign, several members of the directorate campaign actively for the Justice and Development Party (AKP).

Considering the directorate has almost never spoken against the government’s actions or rhetoric, Gormez’s comments to “give youth privacy and freedom, do not focus on details” could even be considered revolutionary. Followers of Al-Monitor’s Turkey Pulse would recall the “alcohol regulations,” “banning of coed housing for college campuses” and “providing safe Internet against porn” are just a few of the recent regulations Turkish Prime Minister Recep Tayyip Erdogan has advocated. He had justified this kind of legislation “based on the 58th article of the constitution to protect youths.” For many, this protection has indeed been suffocation. In one unfortunate incident, a college student fell off the balcony of his girlfriend’s residence in an attempt to hide from the police. He died. The reason was the ban on coed housing.

In addition, pundits and opposition politicians have been complaining about the directorate’s silence on the matter of corruption since the Dec. 17 graft probe. Muharrem Ince, an outspoken member of the Republican People’s Party (CHP), on March 29 had called upon Gormez to “take off his religious garb and become Erdogan’s deputy.” Ince criticized Gormez further: “Instead of supporting those who argue, ‘You cannot be a Muslim and be secular at the same time,’ Gormez should ask them, ‘Can you be a thief and Muslim at the same time?’”

The directorate has been under scrutiny as several pundits have asked why it has not been critical of the AKP administration’s policies and actions. Indeed, right before the March 30 municipal elections, there were allegations that the Friday sermons — prepared and distributed by the directorate to all mosques — were encouraging worshippers to vote for the AKP. Even conservative pundits have voiced concerns, expounding their reasons why the directorate should be kept away from politics.

At this point, the crucial question is: Who speaks for Islam in Turkey? The Religious Affairs Directorate was set up for this purpose in the early years of the republic. Intriguingly, as the financial and human capital of the institution has grown exponentially over the last decade, so has criticism against it. The most crucial criticism is that everyone has to contribute to the directorate through their taxes, but not everyone’s interests are represented. First, of course, are the official religious minorities of Turkey: Christians and Jews. With dwindling numbers, their voices are hardly loud enough to criticize the directorate.

Then there are the Alevis and Shiites, who have been resisting the Sunnification process for decades. Alevis particularly have been struggling on multiple fronts to receive some sort of acknowledgement about their religious identity. So far, even their houses of worship (cemevis) have not been recognized formally. Now to this crowd, one can add the voices of the Gulen movement as well. Several pundits known for their close links to the movement have spoken out against the potential dangers of politicization of the mosques. In a column in the daily Zaman (a newspaper associated with the Gulen movement) titled “Murder in front of the Religious Affairs Directorate,” Huseyin Gulerce voiced deep concern about Erdogan’s criticism of Fethullah Gulen “as a fake prophet” at a meeting of the Religious Affairs Directorate. Gulerce asked, “Would not the stability of the country be harmed if the mosques are polarized as such?” He concluded that politics have dominated religion.

Two worrisome observations seem to validate Gulerce and others. One is that almost all AKP elites have been silent on an alleged leak in which former EU Minister Egemen Bagis was heard to be talking about the holy book of Islam, the Quran, in a disrespectful manner. Although independent theologians have condemned Bagis, and opposition has gone to the extent to claim, “Erdogan has become the flag bearer of Islamophobia!” Bagis is still a part of the AKP. Indeed, Bagis was next to Erdogan and his family during the prime minister’s famous victory speech on March 30 from the balcony.

Second, the defense speeches of four former ministers who have been allegedly involved in the Dec. 17 graft probe were based on a heavy religious rhetoric. Even though the subject was unrelated to the charges, the former ministers kept reminding the public that they had been to hajj and given iftar (breaking of the fast) dinners in an attempt to portray a rather pious picture of themselves. It is a scary tipping point when their defense was not based on proving they are not “thieves” but that they are good Muslims, since the common belief is that “good Muslims cannot be thieves.”

This seems to have become the trend. While secular Turks have feared religion would dominate politics, we now witness overwhelming authoritarianism that indeed dominates and reshapes what is acceptable for religion. Under this powerful wave of unchecked political power, so far the state-sanctioned Religious Affairs Directorate seems to have succumbed. If the Religious Affairs Directorate loses further credibility in the public eye, would this cause alternative underground mosques with their own independent imams to flourish?

A new song album of Fethullah Gulen’s English-translated poems has been released. The album titled “Rise up-Colors of Peace,” featuring poems by Gulen composed into songs, has been released jointly by Nil Production and Universal Music after two years of recording. According to Kaynak Publishing press release, 12 poems out of 50 that were previously translated […]