Some members of the Turkish community here are worried about reprisal after the July 15 failed military coup in Turkey.

These people are followers of the Gulen movement, named after Muslim cleric Fethullah Gulen of Turkey.

Following the government crackdown, president Recep Tayyip Erdogan blamed the coup on followers of the cleric, who has since denied any involvement.

Mr Ahmet, a Turk expatriate here who runs a restaurant, says: “What if my business fails? What if I cannot renew my (employment) pass? I will have to go home.”

He says he is also worried for his extended family back in Turkey.

Mr Ahmet says in a phone interview that he posted some pro-Gulen articles that might be misconstrued as showing support for Mr Gulen.

He says: “I should not have done that. Actually, I don’t care about Mr Gulen or Mr Erdogan. I just want to live in peace.”

The crackdown in Turkey ended more than 30,000 careers – lawyers, educators, journalists, civil servants – and so far, more than 24,000 people have been detained or arrested.

Critics say the evidence that they are linked to the Gulen movement is scant at best in some cases.

On Thursday, one stock analyst lost his licence on the basis of a research report that the government claimed had insulted the presidency, reported the Financial Times.

But for Turks overseas, including those in Singapore, this uncertainty of being arrested if they return home is growing too.

Members of the community tell The New Paper on Sunday that there are about 1,000 Turks in Singapore today.

Mr Ahmet had moved here in 2009 to start up a Turkish food and beverage outlet here.

He declines to use his real name and spoke on the condition that there will be no pictures of him or his restaurant.

Fear is palpable in his voice as he explains why he needs to remain anonymous.

“I am sorry I cannot be named, I have family in Turkey, and I am afraid for them if I speak to the media,” he says.

He is not the only Turkish national here who fears reprisal from their government. Those linked with the cleric and his movement are especially worried.

In his 2008 journal article, Towards A Middle Way Islam In Southeast Asia: Contributions Of The Gulen Movement, Dr Mohamed Nawab Mohamed Osman wrote that the Gulen movement first found a foothold here in 1997.

The S. Rajaratnam School of International Studies assistant professor wrote that the movement first took shape in the form of the Turkish Cultural Centre (TCC) in Singapore, which exists today in Hillcrest Road in Bukit Timah.

TCC was originally named the Turkey-Central Asia Cultural Centre, but Dr Nawab tells TNPS that he does not believe Singapore is the centre for the Gulen movement in the region.

While he called it a “movement” then, he now admits that it was a mistake as the group was not an organised entity that sought to influence local religious practices.

Dr Nawab says: “What is more accurate is to describe it as a community of people who, perhaps, subscribe to the ideas of Fethullah Gulen.

“They put in a lot of effort to integrate within Singapore society. Many of them are married to Singaporeans and are naturalised citizens. I am talking about Turks who would take you to durian parties.”

He observed that Gulen followers in Singapore follow an “overtly apolitical position”, believing that politics should be independent of religion.

Because anyone who subscribes to this idea can be considered a Gulen follower, it becomes “problematic” to label anyone a Gulenist, as Mr Erdogan has done, explains Dr Nawab.

“I have the highest respect for Lee Kuan Yew’s values, but does that make me a Kuan Yew-ist? This term Gulenist is coined by critics of the movement,” he says.

“This issue in Turkey today is political, not a religious one.”

But for Mr Ahmet, he has little hope that things will get better any time soon.

He says: “I don’t know how long this will last. We all need to lie low.” 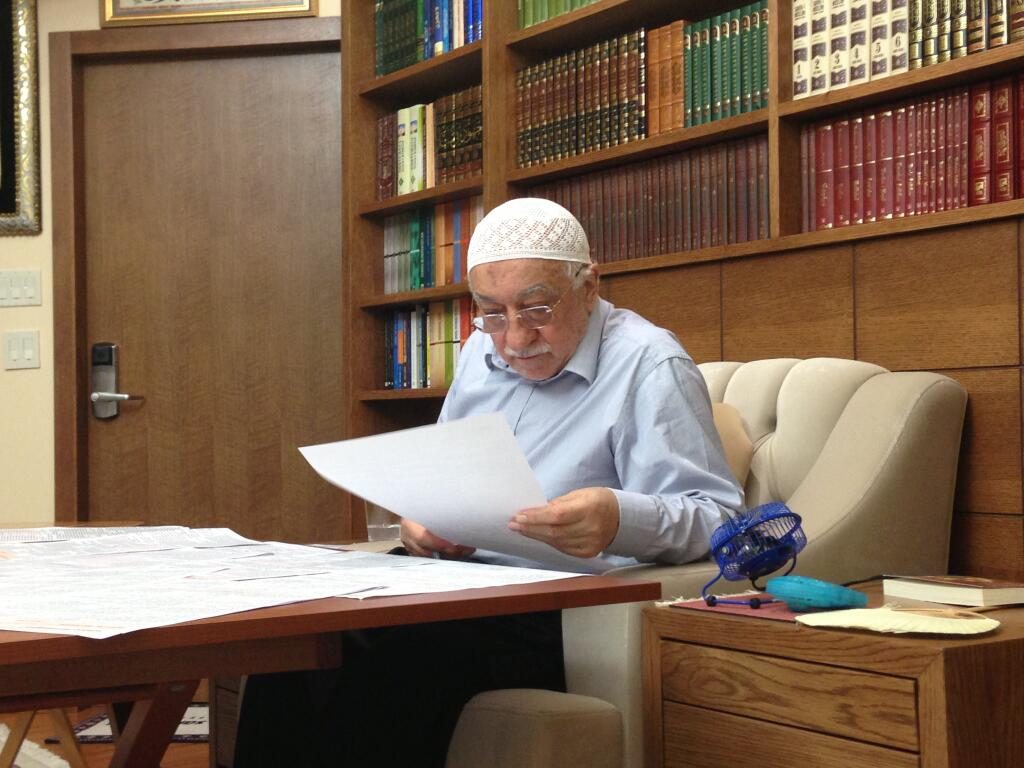 Once apolitical ally of Turkey president Recep Tayyip Erdogan, the Muslim cleric Fethullah Gulen is now living in self-imposed exile in Pennsylvania, US.

Mr Gulen, a Turkish reformer, began his career in 1953 as a religious teacher at a government school and later at mosques in Edirne and Izmir.

His teachings espouses how Islam can exist in different forms and can be open to interpretation. Mr Gulen also advocates for acceptance and dialogue with the non-Muslim community.

Around the world, his followers have created hundreds of modern, highly regarded schools known as “hizmet” schools that are inspired by Mr Gulen’s teachings.

These schools first emerged in Turkey and in neighbouring Central Asian countries, but are now established in South and South-east Asia, Africa, Europe and Australia.

Mr Gulen and Mr Erdogan fell out with each other in 2013 after a criminal investigation into a corruption scandal involving key figures in the ruling Justice and Development Party (AKP).

In May this year, Mr Erdogan designated the religious movement of Mr Gulen as a terrorist organisation called the Gulenist Terror Organisation (Feto) for creating a parallel state within the country.

On July 15, a coup attempt involving a portion of Turkey’s military was thwarted and Mr Erdogan has blamed it on Mr Gulen and Feto.

At least 246 people, excluding the plotters, were killed.

Since then, the Turkish authorities have dismissed, suspended or placed under investigation tens of thousands of people in state institutions including government ministries, the armed forces and the police over suspected links to Mr Gulen and his movement.