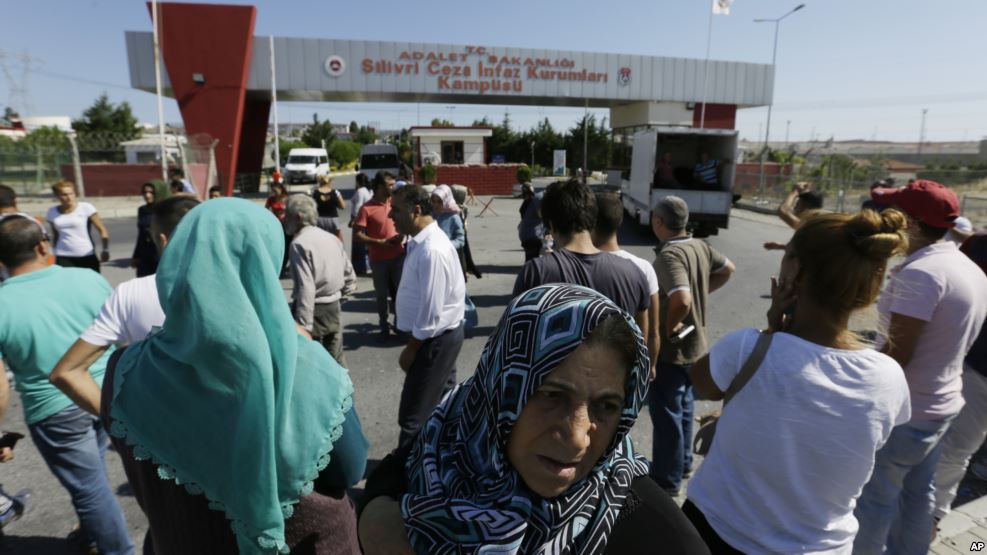 Relatives and friends of prisoners wait outside a high security prison complex in Silivri, about 80 kilometers (50 miles) west of Istanbul, Aug. 18, 2016.

According to the latest official figures, more than 100,000 people have been removed from their state jobs and 60,000 detained or arrested since July’s abortive coup. The firings and arrests are primarily aimed at followers of Gulen.

Turkish President Recep Tayyip Erdogan is promising no let up in the crackdown. ”No country or region will be safe for members of the Gulen movement, we will hunt them all down,” he told reporters Monday.

Experts say Gulen has hundreds of thousands of supporters in Turkey, who have built a wide network of businesses and private schools and supporters across the country. The government has said it is determined to break up this network, which it accuses of not only supporting the coup attempt, but running a parallel state that favors its supporters and crushes opponents.

Gulen, who lives in the United State, denies all the allegations.

Erdogan has said that Turkish citizens have a duty to report friends or family they suspect of being Gulen followers. A pro-government TV station has set up a telephone line for people to report their suspicions.

In an opinion poll conducted via social media last month, 90 percent of the respondents said they backed the crackdown on Gulen and his followers. That popular consensus extends into politics, with the main opposition CHP party in the forefront of supporting a crackdown on Gulen followers, even claiming it should have been done much earlier.

But cracks in the political consensus are appearing, with questions over its scale and motivation growing.

“You’ll break the hearts of hundreds of thousands of people if you carry out these prosecutions with the feeling of revenge and hatred,” warned CHP leader Kemal Kilicdaroglu.

The CHP claims it has received complaints from more than 30,000 people about the ongoing purge. The scale of the complaints has led to the party set up a telephone hot line and email desk.

The crackdown is being carried out under emergency rule, which has suspended most of the legal checks on the authorities’ actions.

“This is a witch hunt,” said Kadri Gursel, a political columnist for Turkey’s Cumhuriyet newspaper. He believes the government has lost control.

“To please Erdogan, people do compete against each other to hunt more Gulenists, because this purge, this cleansing, is not done according to institutional rules, and due process does not exist,” he said. “There are no institutions left in Turkey. There is only fear.”

Fear has spilled over into violence. Turkish media reported last week that a police officer shot dead a local official of the ruling AKP, after the official accused the police officer of being a Gulen sympathizer during an argument over who was behind the July coup attempt.

Meanwhile, government ministers have reportedly expressed concern that the crackdown is being used to settle personal scores.

Presidential adviser Ayse Sozen Usluer acknowledged such concerns, but said the country is facing exceptional dangers and will “soon” return to “normal.”

Prime Minister Binali Yildirim has announced an appeals process, through which people can challenge dismissals and wrongful prosecutions. But how independent that process will be remains unclear. Observers point out a key test of the government’s intentions will be whether it honors its commitment not to extend emergency, rule which comes up for renewal next month.