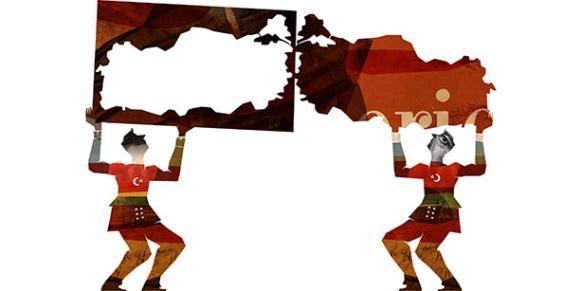 The list of individuals that Prime Minister Recep Tayyip Erdoğan has declared to be part of an alleged “parallel structure” keeps growing.

The latest addition to the list is Haşim Kılıç, president of the Constitutional Court, which annulled the Justice and Development Party (AKP) government’s legislative amendments aimed at subjugating the Supreme Board of Judges and Prosecutors (HSYK) to Erdoğan’s minister of justice, and lifted the ban on access to Twitter and other social media networks. His possible rivalry to Erdoğan in the upcoming presidential elections makes Kılıç all the more suitable for the “parallel” label, obviously.

While Erdoğan and his choir are hyping their “parallel structure” allegations, however, there seems to be what one might call a “Persian structure” making headways into the arteries of the state bureaucracy (including the Turkish Armed Forces [TSK], the Ministry of Foreign Affairs and the National Intelligence Organization [MİT]), academia and mosques. The AKP government’s policies have transformed so much in favor of Iran, at the expense of Turkey’s interests, that one wonders what could possibly be any different if Turkey were run from Tehran.

In the eyes of many both inside and outside Turkey, Prime Minister Erdoğan has lost almost all credibility. Yet, the allegations of “parallel” and “Persian” structures within the Turkish state apparatus remain serious claims and must be thoroughly scrutinized.

The first one is quite simple indeed. Erdoğan and his choir accuse the Hizmet movement, inspired by Turkish Islamic scholar Fethullah Gülen, of having established a parallel structure in which bureaucrats and members of the police and judiciary who sympathize with the movement are allegedly receiving orders not from their superiors but from either Pennsylvania — where Gülen resides in self-imposed exile — or from their brethren in the movement.

More specifically, it was Murat Karayılan, then-“number two” of the separatist Kurdistan Workers’ Party (PKK), who first alleged that the Hizmet movement had created a parallel structure within the state. In that sense, Erdoğan took the baton from the terrorist Karayılan by accusing the prosecutors and police chiefs involved in the graft probes that had implicated four ministers in Erdoğan’s Cabinet, an Iranian businessman and Erdoğan’s son, among others. Immediately after halting both the Dec. 17 and Dec. 25 graft probes, Erdoğan declared Gülen and the Hizmet movement his arch-nemeses and has gone beyond our wildest imagination in terms of vulgarity, using such words as “assassins,” “leech,” “false prophet,” “fake scholar,” “traitor,” etc., to demonize both Gülen and individuals inspired by his ideas.

Despite all these accusations, the Erdoğan government has not produced any evidence to substantiate his allegations of a parallel structure within the judiciary, police or any other state institution, nor of officials receiving orders from anywhere other than their own legal superiors, nor has he or his government brought any of these charges to court. As such, one is left to wonder: If they are “parallel,” what are they are parallel to? Are they parallel to corrupt government officials and bureaucrats or to the bloody-handed PKK terrorists.

Turkey’s Persian puzzle: Who is really running the country?

Amid all the cacophony orchestrated by Erdoğan and his choir over the so-called parallel structure, the suspicions raised about a possible Persian structure nested within the state apparatus have mostly gone unheeded so far. A few of the journalists writing about espionage matters, such as Adem Yavuz Arslan and Gültekin Avcı, have tried to draw the public’s attention to the Persian infiltration of MİT, the Ministry of Foreign Affairs, the Interior Ministry, the Office of the Prime Ministry and other key state institutions.

The allegations of Persian infiltration have mostly centered on three high-level officials: Deputy Prime Minister Beşir Atalay, Minister of Interior Efkan Ala and MİT chief Hakan Fidan. Although, according to already public information, these individuals have been in unusually close contact with Iran and Iranian figures, both before and after assuming their official capacities, trying to explain the Persian infiltration by their affinity with Iran would hardly be more convincing than Erdoğan’s parallel structure allegations. Nor would it have any impact, as these three seem to have become the closest confidants of Erdoğan.

One should instead look at what the AKP government has been doing lately. One should notice the parallelism between its actions and what Tehran might have imagined happening in Turkey. As the AKP used to boast during its election campaigns, one should look at deeds, not words.

First, since Feb. 7, 2012, when a prosecutor tried to summon Fidan for testimony about a PKK investigation, a perception has been created, propagated and enforced by the AKP camp. According to this perception, the prosecutor was a member of the parallel structure, so if Fidan had gone to testify, he would have been arrested and consequently Erdoğan would have been arrested. As if a prosecutor has the authority to arrest someone, let alone the MİT chief and the prime minister. Nevertheless, amid the great controversy based on this false perception, Erdoğan rushed legislation overnight through the AKP-dominated Parliament, making the investigation of any MİT personnel dependent on his personal approval.

Second, since November 2013, the AKP government has rapidly moved to ban all higher education exam preparation courses, a quarter of which are believed to be run by Hizmet-affiliated individuals. Erdoğan himself has publicly admitted that the ban aimed to prevent the Hizmet movement from interacting with the country’s youth, some of whom would eventually join the ranks of the state bureaucracy. In a complementary manner, Erdoğan went on to sack or pacify all bureaucrats who had been profiled by Fidan’s MİT to be related to the Hizmet movement. Erdoğan’s minister of interior, Efkan Ala, has done the same within the police. Apparently, for one to be profiled as such, having attended a Hizmet-affiliated school or prep course or having donated to a Hizmet-inspired charity were sufficient.

Moreover, Erdoğan and his foreign minister, Ahmet Davutoğlu, have embarked on a disgraceful campaign to shut down the so-called Turkish schools established by Hizmet movement volunteers in about 160 countries. They have been pressuring and trying to bribe foreign governments to shut down Turkish schools in their countries. In addition, they have instructed Turkey’s ambassadors abroad to do the same. Yet at the same time, the AKP’s minister of education recently attended the opening ceremony of an Iranian school in the nation’s capital, Ankara. In the meantime, he has continued his predecessors’ tradition of giving accreditation to Iranian universities and transferring Iranian faculty and students to Turkey.

In relation to this, Erdoğan vowed in his election rallies that he would not let the annual Turkish-language Olympiads take place this year, and nor would he let any AKP-held municipality allow the use of its facilities for the preparations of this event. He has already acted on his word by depriving Hizmet-inspired nongovernmental organizations of the right to use municipal facilities for events dedicated to the commemoration of the Prophet Muhammad (peace be upon him). It is most likely that Turkish Airlines (THY), which has already denied a former AKP deputy, Dr. Muhammed Çetin, the right to fly, will make it difficult for students and teachers at Turkish schools to fly to Turkey for the language Olympiads.

Furthermore, Erdoğan’s government recently halted a three-year investigation into the Iranian-backed Tawhid Salam terrorist organization and removed the prosecutor. The newly assigned prosecutor publicized the details of the investigation, thereby allowing the culprits to vanish. Erdoğan himself has ridiculed the investigation, which implicated MİT chief Fidan as being connected to the Iranian regime, as the so-called parallel structure’s pretext to wiretap as many as 7,000 citizens.

On the foreign policy front, despite Turkey and Iran’s conflicting interests in Syria, the two have never clashed over the course to be taken in respect to the conflict in this country. Iran has continued to provide monetary, logistical and military assistance to the Syrian government and actively fought on the ground against the Syrian opposition. While AKP leaders have delivered inflammatory speeches against the Bashar al-Assad regime, they have failed to criticize Iran’s involvement and support as such. In the meantime, hundreds of thousands of Syrian refugees have poured into Turkey, and about 200,000 Syrian civilians have been killed. At this point, Turkey is internationally alleged to have been involved in the use of chemical weapons and other war crimes in Syria, while Iran is flirting with international powers as a rising actor of the region.

Finally, under the attentive supervision of Deputy Prime Minister Atalay, Erdoğan’s government has managed to pass a new legislation giving Fidan’s MİT supreme privileges and protection while eliminating almost all judicial supervision over it. Among these privileges is the authorization to carry out covert operations abroad; unhindered access to any corporate or individual information; the ability to wiretap Turkish citizens as well as foreign nationals living in Turkey; and granting Turkish citizenship to foreign nationals. Some high-level AKP officials — e.g., Burhan Kuzu and Mazhar Bağlı — have already publicly threatened that the new MİT law will work against Hizmet-inspired institutions and individuals, whom are considered to be traitors and spies for foreign countries such as the US and Israel.

Last but certainly not least, this Persian structure has over the past few years got AKP officials, most notably Erdoğan and his family members, so deeply involved in crime and corruption that they have had to swallow the bitter fact that, for them, life without the Persian structure is life in prison. That’s why AKP officials are so adamant about making both the judiciary and the police defunct, in the guise of fighting the so-called parallel structure, so that they can no longer be prosecuted.

So, when we look at deeds, not words, which one is nested within the Turkish state? Is it a parallel structure, or a Persian structure?

Really, while it is a historical fact that the former Soviet Union’s Committee for State Security (KGB) once infiltrated even the United States Central Intelligence Agency (CIA) at a very high level, is it conceivable to any sane mind that Turkey’s MİT and other key state institutions are immune to Persian infiltration? The propaganda machine may say “yes” to this question, but the deeds say “no.” If the latter is the case, it is not solely Turkey’s problem, given that Turkey is a NATO member.

*Ömer Yavuz is an investigative journalist based in İstanbul.