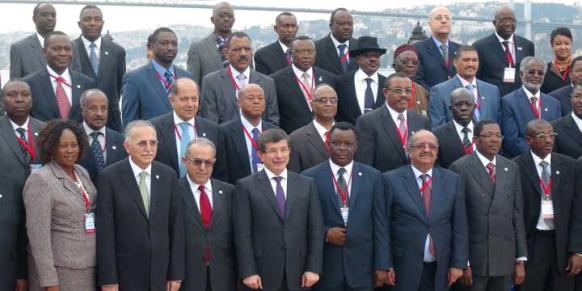 After introducing its policy of opening up to the African continent almost 10 years ago, Turkey earned the admiration of many Turkish and foreign diplomats for its foresight; however, Ankara’s shift toward domestic issues and use of foreign policy to get the upper hand in debates at home has pushed its Africa initiative into the background, according to experts.

Ankara initiated its policy of engagement with Africa, promising to develop many partners for Turkey both in the diplomatic arena and in the world market, in 2005. Turkey pursued a multidimensional foreign policy toward African states and increased the frequency of its state visits. The central aim was to open up to the African continent, concentrating on diplomatic relations without neglecting the areas of commerce and culture.

Numan Hazar, a former ambassador and author of the book “Relations Between Africa and Turkey in the Globalization Process,” believes that the adoption of the Africa Action Plan in 1998 and Turkey’s dubbing 2005 as “Africa Year” kicked off thriving relations between Turkey and the African continent. He says the trade volume between Turkey and African states rose, Turkey obtained observer status in and became a strategic partner of the African Union and the tiny number of Turkish embassies in Africa increased considerably with the help of the initiative.

Ufuk Tepebaş, an independent researcher on Africa, confirms that Turkey’s Africa policy was jump-started and that Turkey gained considerable ground in improving its relations with Africa. However, he argues that over the last two years, Turkey has begun to lose the momentum that was gained.

“With the help of the active diplomacy that Ankara conducted between 2003 and 2011 and the ‘Strategy for Enhancing Trade and Economic Relations with African Countries’ that was adopted in 2003, Turkey started to be known as Africa’s rising partner. However, in my personal opinion, the momentum in our relationship [with the African continent] decreased despite the new embassies opened in these years,” Tepebaş told Sunday’s Zaman, adding, “Sustainability in Africa is so important.”

According to Tepebaş, although Turkey has opened new embassies in recent years, the staffers in these embassies are underqualified and the missions don’t have attachés for trade, military and cultural affairs. Moreover, the embassies don’t use technology effectively, he says.

One of the main reasons behind the loss of momentum in Turkey’s once-intense efforts to boost relations with African states is the Turkish government’s effort to win domestic battles at any cost.

In one such attempt, the Turkish government started to work on a plan to get states to close down Turkish schools abroad that are affiliated with the Hizmet movement, which is inspired by the teachings of Islamic scholar Fethullah Gülen and known as one of Turkey’s most important soft-power instruments.

Reports circulating in the Turkish media alleged that Foreign Minister Ahmet Davutoğlu sent orders to Turkish embassies to take steps toward the closure of Turkish schools, which are widely applauded for their quality of education and their contribution to Turkey’s global reputation.

Speaking to reporters on the sidelines of meetings in New York in early April, where Davutoğlu went to seek support for Turkey’s bid for nonpermanent membership on the UNSC for the 2015-2016 term, Davutoğlu said the reason behind the orders was that a number of foreign civil society representatives had sent letters to officials in their countries in which they complained about Turkey.

As a result of the Turkish government’s pressure on foreign countries, a Turkish school in Gambia immediately closed, according to some reports in the Turkish media.

Tepebaş says he hasn’t personally visited these schools in Africa; however, he knows their reputation and his African friends confirm that there is no doubt about their success.

“To me, problems in domestic politics reflected in Africa harm the successful opening process. One also needs to think about how the African side will react to these closure attempts,” the Africa expert said, stressing that Turkey needs to consider the costs and benefits while taking steps to close the schools.

However, Tepebaş claimed that the heads of some Turkish schools in Africa complained that Turkish ambassadors to African states were not helping the schools on some issues. “It is also not possible to approve of these kinds of acts [complaints],” he said.

A leaked voice recording purportedly of a Turkish Airlines (THY) official and an adviser of Prime Minister Recep Tayyip Erdoğan discussing a weapons transfer to Nigeria, also raised suspicions about Turkey’s Africa policy. Although THY denied allegations that it was involved in transferring weapons to Nigeria, saying it abides by international law and International Air Transport Association (IATA) regulations on shipments of arms and military equipment, the allegations left many with unanswered questions.

Hazar said that when the action plan was prepared in 1998, defense was among the fields that Turkey and African states were meant to cooperate on. He said there are strict international restrictions on the defense-products trade and that international air transport laws also apply strict controls to the transport of arms.

“Turkey’s preservation of its soft-power image is of the utmost importance. Therefore, it needs to conduct careful diplomacy. … Although the allegations circulating in the Turkish media aren’t likely to be true, THY needs to preserve its positive image and it shouldn’t be mentioned in connection with these kinds of developments,” Tepebaş said.