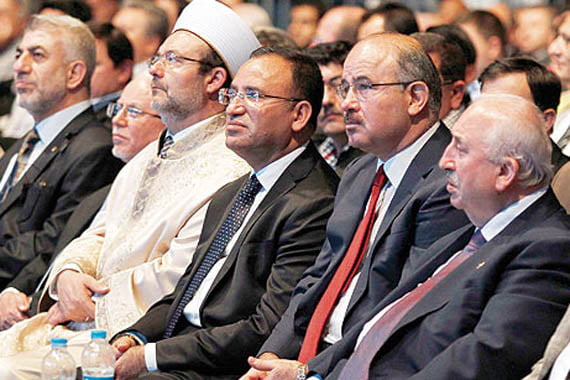 A three-day international symposium launched on Sunday in İstanbul with the theme of nubuwwat (prophethood) has started with a message that a true believer of Islam cannot become a suicide bomber.
Speaking at the opening ceremony of the 10th edition of the symposium focusing on the teachings of prominent Islamic scholar Bediüzzaman Said Nursi, Deputy Prime Minister Bekir Bozdağ said a Muslim who truly believes in God and follows the footsteps of the Prophet Muhammad can never be a suicide bomber or resort to terrorism.

“Is it acceptable for a true Muslim to associate the name of Islam, his prophet’s name and the name of a religion of peace with terrorism and violence? Whoever does these things cannot accept the Quran and revered prophet as a guide,” Bozdağ explained.

The symposium started on Sunday with the participation of 400 academics from more than 40 countries. There will be 96 speakers and over 300 observers at the symposium, which is organized by the İstanbul Science and Culture Association.

During the symposium, titled “Role of Nubuwwat in Search of Truth: The Risale-i Nur Perspective,” participants will discuss nubuwwat as it is handled in Bediüzzaman’s books, the Risale-i Nur collection, and exchange views on issues such as why humanity needs prophets, what are the common messages of the prophets and what is their contribution to humanity.

The first day of the symposium took place at İstanbul’s Sinan Erdem Sports Hall in the Ataköy neighborhood, while the second and third days will be at the Wow Hotel in the same neighborhood. Sessions will be in Turkish, Arabic and English.

Welcoming participants in his introductory remarks, Professor Faris Kaya, head of the İstanbul Science and Culture Association, said revealing the truths of nubuwwat in detail will help people understand the Creator. He added that this was the first time that so many academics and theologians from various religions, cultures and regions will come together to discuss nubuwwat and the Prophet Muhammad.

Hüseyin Çelik, the deputy chairman of the ruling Justice and Development Party (AK Party), has said Bediuzzaman was persecuted and prosecuted by the state when he was alive, yet his views have now spread all over the world. Çelik emphasized that Bediuzzaman defended principles of republicanism against the repressive state and those who associated secularism with atheism.

Mehmet Görmez, head of the Religious Affairs Directorate, also underlined that nubuwwat is not limited to the life of Prophet Muhammad and its principles are still valid today. “We will need the divine knowledge that was given to us by nubuwwat forever,” he stated. Görmez noted that the Prophet Muhammad, empowered by this divine message, was able to build the most civilized society out of the most nomadic culture in the most unfruitful lands in the world.

Islamic scholar Fethullah Gülen also sent a written congratulatory message to the symposium, saying that the next age would be the age of the Quran and a period of revitalizing the teachings of the Prophet Muhammad. Thanking the organizers of the symposium, Gülen said he hoped the program would conclude successfully. He also said he regretted not being able to personally attend the symposium.

Speaking at the symposium, Kristin Johnston Largen, associate professor of systematic theology at the Lutheran Theological Seminary at Gettysburg, said as a Christian she sees Bediuzzaman as a special person because he focused on Muslim-Christian dialogue.

Professor Aslam Islahi, dean of the School of Language, Literature and Culture Studies at Jawaharlal Nehru University, said he hoped the works of Bediuzzaman will spread in India as well. Islahi emphasized that coming from a country where Muslims are a minority, he was encouraged to see such a big gathering of Muslims.

The three-day symposium will feature the presentation of over 100 papers from scholars and students who aim to address questions such as how modern societies can learn from the lives and examples of prophets from throughout history.

Scholars from different universities known for their works on the Risale-i Nur collection or familiar with his works will offer insights into Bediuzzaman’s thoughts on nubuwwat. The meetings began with the memorial ceremony of Bediuzzaman in 1991, and then in time turned into symposiums of understanding the Quran, the Prophet Muhammad and the Risale-i Nur collection.