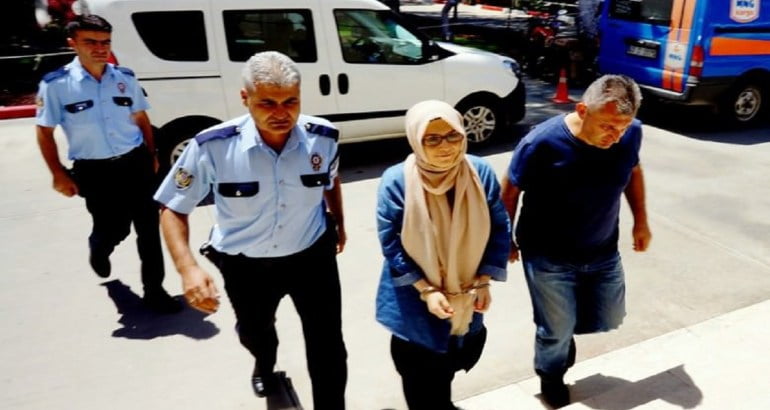 An author, lawyer and journalist who made a career and a name for herself from years of working as a court reporter who chased high-profile legal cases has become a victim of Turkish government’s massive crackdown on freedom of press in Turkey.

36 year-old Hanım Büşra Erdal, a prominent journalist, has been locked up behind bars in Turkey for 438 days over trump-up charges of terror based over her social media postings on Twitters, comments and books she owned. This bright and intellectual journalist has been languishing in İstanbul’s Bakırköy Women’s Prison for 14 months with no glimmer of hope that she would be get out any time soon.

Erdal started as an intern reporter in 2002 in Turkey’s one-time largest circulated national daily Zaman when she was a student in the law faculty in prestigious İstanbul University. She followed many legal cases and reported about them in the daily for years. The exclusive stories she covered during landmark Ergenekon and Sledgehammer cases where a renegade ultra-nationalist group that is nested in Turkish military and government tried to wreak havoc in Turkey by plotting murders, terrorism acts and coups carried her name to the front pages of the newspaper. She later authored two books namely “Ergenekon For Those Who Are Confused” and “Certified Lies”. Erdal has to fight with more than 70 lawsuits filed against her because of her writings and coverage about these trials.

When the government forcibly seized her newspaper in March 2016, Erdal was among the first one that were immediately fired by the trustees appointed by the government to change the critical Zaman daily into a government mouthpiece. Yet, she did not give up and continued writing for Yeni Hayat daily that was set up by dismissed journalists.

When the government issued detention warrants against 42 journalists including her on July 25, 2016, ten days after the failed coup bid in Turkey, she was taking a break in her parent’s home in the western province Manisa. She knew the ins and outs of the legal system, had the wealth of expertise as a court reporter and a lawyer and thought she could very well defend herself against frivolous charges. Yet, what she did not realize was that the rule of law is completely suspended in Turkey with no due process and no fair trial protections. Erdal turned herself into the police when she had a chance to flee the country.

Stockholm Centre for Freedom (SCF) talked to her colleague who had a conversation with Erdal just hours before she surrendered herself to the police. Speaking on the condition of anonymity, the colleague said Erdal was confident and told him over the phone that “I am a journalist and a lawyer as well. I do defend myself. I did nothing wrong.”

She was wrong as the government is not interest in facts but wanted to silence critical and independent journalists. She was a victim of the government intimidation campaign to muzzle what is left of the critical media in Turkey after shuttering 180 media outlets using then failed coup bid as pretext. Although it was against the code of procedures, police handcuffed her and paraded as if a criminal in front of the cameras broadcasting for then pro-government networks. 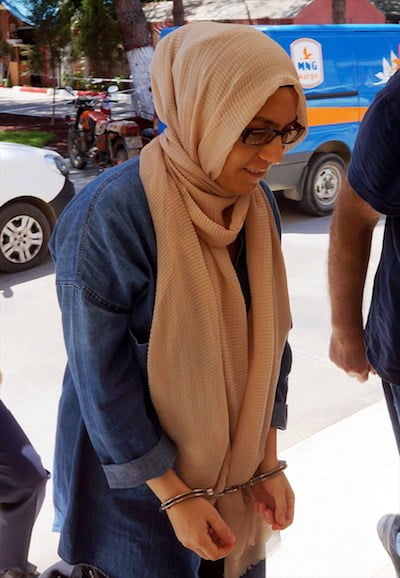 Erdal was formally arrested on July 29, 2016 on farcical terror charges, indicted months later and now faces up to 15 years jail time over her critical tweet messages, comments and articles. She had a chance to appear in the court for the first time on March 25, 2007 after spending nine months in pre-trial detention. The hearings in the case of Erdal and 24 other journalists lasted for five days. To the surprise of many, the court decided to release 21 journalists including Erdal at the completion of first hearings.

The moment after the court’s decision was announced, pro-government journalists including ones from Aydın Doğan’s media group, Erdoğanist trolls and figures in social media kicked off a campaign questioning the journalists’ release. Erdal was especially singled out because of her popularity as a lawyer and author. The vicious campaign by pro-government thugs has even escalated to threats against prosecutors and judges who are involved in the release of journalists. They were warned with arrests themselves.

Before then court judgement to release journalists pending trial was executed, the government brought new charges. 13 journalists were told a new investigation on serious allegations of crime was launched against them despite the fact that they had been in prison for nine months already. A new detention orders issued and they were taken to the police station from the prison cell in a new cycle of processing that led them back to prison again with new added charges. Another 8 journalists who were ordered to be released were re-arrested after the prosecutor challenged the release order and the judge issued a new arrest warrant within hours without even examining their cases and hearing the defendants’ arguments. Erdal unfortunately was one of them.

A few days later three judges who decided to release 21 jailed journalists were suspended by the Turkey’s judicial council the Board of Judges and Prosecutors (HSK).

The nightmare for Erdal is far from over. She was subjected to intrusive naked search, abused and humiliated by the police officers when she was picked up from the prison cell for processing again. Ümit Kardaş, the lawyer of the journalist, told the court on April 27, 2017 hearing that “My client was subjected to an inhuman treatment. She won her freedom but put back to jail again. A month passed since her terrible ordeal in police station but she has not covered from that trauma yet.”

The indictment prepared after seven months after she was put in jail seeks up to 15 years in jail for her. The prosecutor submitted twitter messages, and columns written by the journalist as evidences of the crime. The books authored by Islamic scholar Fethullah Gülen that were found in her library were also listed as criminal evidence. She was accused of being critical against a court decision that unlawfully ruled for the government’s seizure of Zaman daily for which she had worked. Her participation in the protest of the takeover and her critical writings about the seizure order were considered to be crimes. Her published articles on the case of Ergenekon from 2008 to 2012 were deemed as proof of crimes.

In total, the indictment listed 20 tweets, 3 retweets, and 11 articles by Erdal as evidence of terrorism that justifies long prison sentence. During previous hearings, she denied all accusations and said her postings and published articles are part of journalism activity that is protected by Turkish Constitution as well as the European Convention on Human Rights (ECHR). “I am a journalist. I am sure of myself. I did only journalism,” she told the court.

Here are some examples of tweets and retweets posted by Erdal which appeared in the indictment as evidence for terror:

“Trustees appointed from the Lawyers Association. I know 2 of them. One is the husband of my faculty friend. Villains.”

A retweet of a message posted by an academic Mahmut Akpınar: “We call attention to national and international human rights defenders and organizations. There is severe torture, persecution, and mistreatment in detention cells [in Turkey].”

A retweet of a message posted by news portal T24: “Gülen: An international commission should investigate the coup bid. I am ready to accept whatever conclusion this commission would draw at the end of inquiry.”

Turkey is the biggest jailer of journalists in the world. The most recent figures documented by the SCF has showed that 280 journalists and media workers are now in jails as of September 30, 2017, most in pre-trial detention languishing in notorious Turkish prisons without even a conviction. Of those in Turkish prisons, 255 are arrested pending trial, only 25 journalists remain convicted and serving time in Turkish prisons. An outstanding detention warrants remain for 134 journalists who live in exile or remain at large in Turkey.

Detaining tens of thousands of people over alleged links to the movement, the government also closed down more than 180 media outlets after the controversial coup attempt.

Turkey survived a controversial military coup attempt on July 15, 2016 that killed 249 people. Immediately after the putsch, the Justice and Development Party (AKP) government along with Turkey’s autocratic President Recep Tayyip Erdoğan pinned the blame on the Gülen movement.