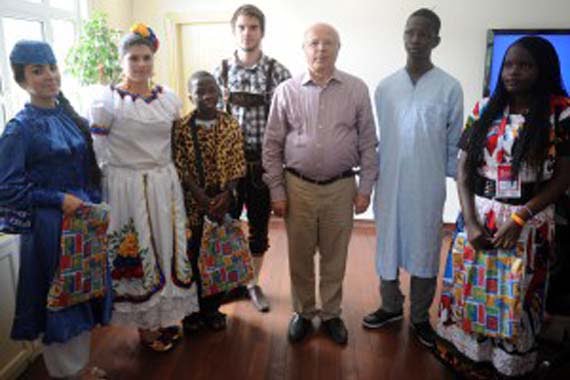 Cem Foundation President Prof. Izzettin Dogan said, in his statements, that the Turkish Olympiads project initiated by volunteer NGOs is of great significance for global peace. “It’s not an easy task to lead children of diverse colors and cultures towards a common goal. Even UN couldn’t achieve that” Dogan said.

The Turkish Olympiad students in Istanbul carried on visiting various officials, over the last week. A group of them, in their traditional dresses, paid a visit to Cem Foundation President Izzettin Dogan. They gave special song and poetry performances and presented gifts to the president. In return, Dogan too presented various gifts to his young guests. The students attracted attentions with their traditional attire and fluent Turkish.

The most meaningful gifts among all were the songs and poems the students performed for Dogan. The song by a Crimean student moved everyone in the room. Moreover, a Malawian student’s “Otuz Bes Yas” (a celebrated Turkish poem) performance and another song by a Kenyan student got the thumbs up.

Closely engaged with his guests, Izzettin Dogan expressed his pleasure to have them around. Noting that the Turkish Olympiads project initiated by volunteer NGOs is of great significance for global peace, Dogan said UN failed to achieve the same. “It’s not easy to lead children of diverse colors and cultures towards a common goal. UN couldn’t achieve that. UN was launched in the aftermath of World War II as an attempt to create a new world order. It was founded so that no more war breaks out and people can live in peace. Yet, as we’ve seen so far, neither did the wars end nor could UN prevent outbreaks. However, this movement seems to have emerged to connect everyone- no matter how different their race, color and culture are- around the shared feature “being a human” and get them love each other. Every reasonable person and peace lover should support and respect this movement. If a civil movement has achieved what we and the state couldn’t, it means it deserves an applause. So I applaud it for that!” Dogan said.

Source: Published [in Turkish] on Cihan, 13 June 2013. English translations is retrieved from Hizmetmovement.com

Zeynalov has been put on a list of foreign individuals who are barred from entering Turkey under Law No. 5683, because of “posting tweets against high-level state officials,” Today’s Zaman learned