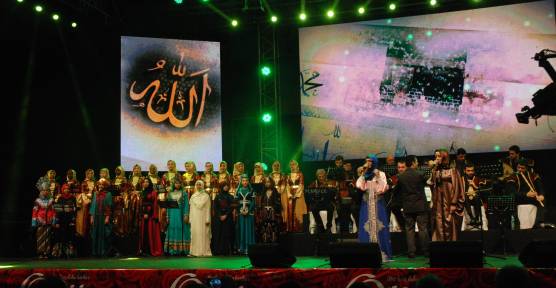 Holy Birth Week marks the Prophet Muhammad’s birth and takes place between April 14 and 20 each year across the Islamic world.

The Holy Birth Week ceremony, organized by the İzmir Intercultural Dialogue Center (İZDİM) and the Yeni Ümit (New Hope) magazine, was held at the Yamanlar Sport Hall in İzmir’s Karşıyaka district on Monday evening with the participation of hundreds of İzmir residents. Participants enjoyed recitations of naats, ilahis (praising God and extolling the characteristics of the Prophet Muhammad) and kasides (odes mostly written for the Prophet) performed by 55 international students from Turkish schools in 30 countries across the globe. The ceremony started with a recitation from the Islamic holy book, the Quran.

Speaking during the event, İZDİM President Ömer Mustafa Aytekin said: “We want the people to speak about him [Prophet Muhammad], read about him and sing about him more in order to make people forget about the unrest created with recent hate speech rhetoric [being used by top government officials against the faith-based Hizmet movement inspired by the teachings of Islamic Turkish scholar Fethullah Gülen] in public.”