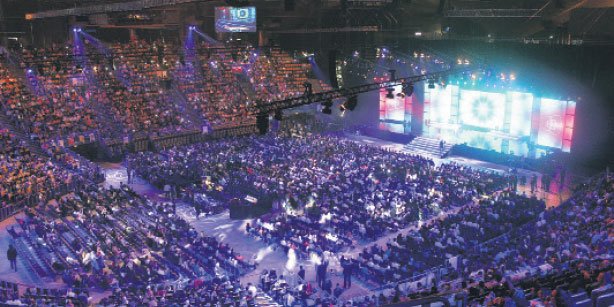 This year, the Olympiad is held under the slogan “Hearts United.” The event has especially attracted great attention in Europe. In recent days, thousands of people came from all over Europe to attend the finals held in Munich in the 15,500-person capacity Olympic Stadium. Some came by bus from as far away as Austria, Italy, Switzerland, the Czech Republic and Holland. Interestingly, the Munich venue is the same place where the 2007 MTV European music awards were held; it is where famous artists like Madonna and Robbie Williams have held concerts.

Perhaps one of the liveliest spots on the Turkish Olympiad circuit is Romania. Here, the language Olympiads are held in the prestigious and extremely large Sala Palatului in Bucharest.

In the meantime, Indonesia also experienced a first this year, with Turkish schools here holding their inaugural Olympiads. In the Philippines, the finals were held in a 1,500-capacity venue known for having the largest LED television screen in Asia, as well as for winning best Asia Pacific interior design award in 2011.

With the aim of presenting and promoting more than just the cultures of two countries, as well as of further strengthening cultural bridges, the Olympiad was held in Paris on April 6 in the resplendent Casino de Paris, a 300-year-old building. With a capacity of 1,570, this is one of Paris’ most prestigious venues. It is a spot known for concerts featuring well-known artists. In fact, in 1957, there was even a film made named “Casino de Paris.” As one of Paris’ best-known music halls, the Casino de Paris was built in 1730 and though it was originally known as Duc de Richelieu, it took on the name Jardin de Tivoli after the French Revolution. Though it was used for wrestling matches up until 1880, it later became a theater for many purposes.

Of the 196 countries registered and represented in the United Nations, 150 are participating in the 2014 Turkish Olympiad, which amounts to 2,500 finalists. The slogan for the 12th International Language and Culture Festival this year is “Hearts United.” In Turkey, this event will take place in all 81 provinces in 150 separate venues. Coming from five different continents and spanning a wide variety of languages, religions and backgrounds, the 2,500 students participating in this year’s events will show off their acquired language knowledge by singing songs, reciting poetry, speaking, writing, doing folk dances, showing off their short films and putting up theater performances.

Canada: In Canada, the finals for this year’s Turkish Olympiads took place on April 14 in Toronto. The contest was held at the Isabel Bader theater, the largest venue in Toronto University. This theater, which opened in 2001, is where the Canadian State Theater puts on its performances. The fact that this special venue’s walls are made of wood and has very good acoustic features is one of the reasons why the Canadian State Theater prefers this venue.

Turkish poetry rings out from Norway’s most prestigious venue

Norway: The finals of this year’s Olympiads in Norway will be held in the country’s largest folk theater and music hall, Folketeateret. The hall was built in 1935 and served as the country’s main opera hall until 2012. It still holds an important place in Norway’s cultural history, having hosted so many important cultural events and concerts.

Las Vegas: The Turkish Olympiad finals on the West Coast of the US are set to take place in Las Vegas on May 4 at the well-known Cashman Center. The Cashman Center has a capacity of 2,000 and is two stories high. It opened in 1948 and hosted the presidential Democratic debate in 2008 and the American Bowling Championship in 2009. It has also been the stage for the Las Vegas showings of important Broadway shows like “Peter Pan,” not to mention a wide variety of shows, festivals and concerts over the years. Interestingly, the Cashman Center also features an indoor baseball field. It is definitely one of Las Vegas’ most important venues. The center features a theater stage and 14 different conference rooms as well.

New York: The finals in New York are approaching and will be held at New York University’s Skirball Center for the Performing Arts. This center is very well-known in the area and is noted for having hosted events such as talks by Secretary of State John Kerry and former Vice President Al Gore, as well as many others. The Skirball Center was designed by architects Kevin Roche and John Dinkeloo.

Chicago: The Chicago elimination rounds for the Olympiads were held on April 12 at the city’s important Rosemont Theater. This stage has hosted not only famous plays but also important names from the world of music, such as Eminem, Ashley Monroe, Leonard Cohen, Justin Bieber and Big Time Rush, all of whom have given concerts here.

Washington: The April 6 finals in Washington saw more than 80 students coming in from seven surrounding states. In fact, those interested in watching the finals were unable to find sitting room at the venue due to overwhelming response. The crowd at this year’s event was twice that of the previous year. The program took place in the city’s well-known Hylton Performing Arts Center and was attended by, among others, Purcellville Mayor Bob Lazaro.

Texas: The Olympiad finals here were held in the city of Houston at the Hobby Center for the Performing Arts on Feb. 15. More than 3,000 people came to watch students and adults alike compete in their Turkish skills. In fact, people from surrounding states like Oklahoma, Arkansas, Kansas, Mississippi and New Mexico came to Texas for this purpose, amounting to nearly 5,000 students in total. The 200 most successful students from these elimination rounds went on to participate in the regional finals in Texas.

Houston Mayor Annise Parker spoke during the program, saying Turks living in Houston had introduced her and the city to Turkey. In fact, the mayor announced that Feb. 15 would be declared as “Turkish Day” in Texas in honor of these finals. The Hobby Center is known by locals as “Serenity Park” and features quite unusual architecture. The walls are made of 60-meter-high glass panels. The center features not only American painter Sol LeWitt but also two bronze statues by British sculptor Tony Cragg. This spot also hosts performances by the Star Theaters and the Gexa Energy Broadway Series.

Romania: The March 12 finals in Romania were held in the country’s largest and best-known concert hall, the Sala Palatului. This venue has witnessed many historic events and conferences over the years, including the United Nations European Economy Commission, the World Population Congress, the World Energy Congress and many others. In addition, Eastern Europe’s most important song festival, held in the name of Romanian singer George Enescu, is held here every year.

Azerbaijan: The finals in Baku took place in the Heydar Aliyev Palace and were attended by National Education Minister Mikayıl Cabbarov and many MPs, academics and businessmen. This particular venue was built in 1972 and named after Vladimir Lenin, though when the Soviet Union dissolved in 1991, it took on the name Republic Palace. Also known as the Baku Palace, it is well-known for being one of Azerbaijan’s most important music centers. The salon took its current name after the death of former Azerbaijani leader Heydar Aliyev.

Madagascar: The Turkish Olympiads in Madagascar were held at the Centre de Conference International, the island’s best-known spot for international conferences and meetings. It is by far the most famous and largest of Madagascar’s venues.

Turkish rings out from Philharmonic theater

Belgium: The Belgian finals were held in Anvers at the large Stadsschouwburg Antwerpen music hall, known for having the largest stage in Europe. Famous theater shows and musical events have been held on this stage, including performances like “Mamma Mia!”, “The Sound of Music,” “Les Miserables,” “Notre Dame De Paris,” “Cats,” “Phantom of the Opera,” “Romeo and Juliet,” “Dracula” and so on.

Finals in the shadow of the Alps

Switzerland: The finals in Switzerland were held in Bern and were attended by the city’s mayor, among others. The April 2 finals took place at the Kursaal Arena, a legendary conference venue in Switzerland. This particular venue is known for its extremely high technical features, as well as for the incredible view of the Alps mountain range.

Albania: The Albanian leg of the Turkish Olympiad finals was held in the well-known Pallati Kongreseve. With capacity of 2,250, this venue is the country’s largest and most important congress and cultural center. Located in the capital, Tirana, the salon is right across from the presidential palace and near the Art University. Behind it is the Qemal Stafa Stadium. The venue is directly tied to the State Services General Directorate and works in concert with the presidential office. It is known for hosting every famous national and international cultural and musical event in Albania.

South Africa: The South African final of the International Turkish Olympiad was held on March 26. The event was hosted by Khangelani Mhaleni, who held a spear in his hand and enthralled audience members in the 2006 finals. The final was held in the Linder Auditorium, located in the University of the Witwatersrand, one of the country’s largest universities. With a capacity of 500 people and a history that goes back 100 years, this salon carries traces of its rich past. It is also known as being the preferred venue for one of the world’s largest orchestras, not to mention many opera stars.