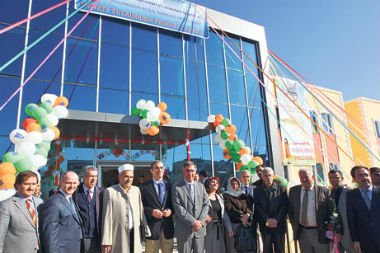 Justice and Development Party Spokesman and Deputy Chairman Huseyin Celik said the teachers of the Turkish schools operating in Northern Iraq beat the odds in the region.

Following his official contacts in Erbil, Celik moved on to Sulaymaniyah where he attended the opening ceremony of Private Sulaymaniyah Primary School. In company with Celik, deputy-president of Turkish Council of Higher Education Muhittin Simsek, Sulaymaniyah Governor Behroz Salih, Mayor Yusuf Siyasi and a large number guests, as well, were in attendance of the ceremony.

In his remarks, Huseyin Celik called attention to the outstanding success the Turkish teachers achieved in the region. Noting that it is relatively easy to construct buildings and roads, “However, our teachers arrived here in 1994 to give education under harsh conditions. Those teachers having set off on this journey beat the odds. So I would like to thank them” said Celik. He further commented on the teachers’ commitment, he believes, rooted in educational, cultural and spiritual values.

Celik later conveyed his ‘get well soon’ wishes to Iraq President and secretary-general of Patriotic Union of Kurdistan, Jalal Talabani. Next on his agenda for the evening was a visit to Jalal Talabani’s wife, Hero Xan Talabani.

Source: [in Turkish] on Cihan, 30 April 2013. English translation is retrieved from HizmetMovement.Com