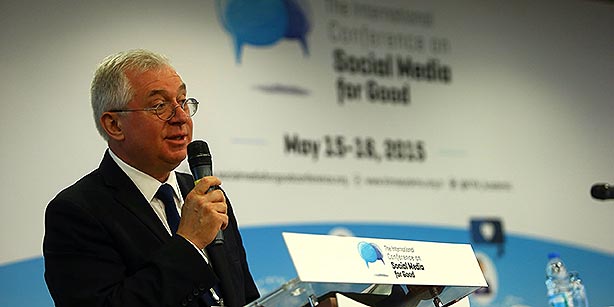 The keynote speaker for Friday's meeting was Andrei Abramov, the former chief of the NGO branch of the United Nations Economic and Social Council (ECOSOC). (Photo: Today's Zaman, Mehmet Yaman)

The keynote speaker for Friday’s meeting was Andrei Abramov, the former chief of the NGO branch of the United Nations Economic and Social Council (ECOSOC). He noted, “The role of information and communications technology (ICT) has been, and continues to be, crucial to the development of an effective and beneficial global civil society, since they enable the necessary interconnectedness across borders, the free flow of ideas, the exchange of thoughts and the process of consensus building that form the backbone of a civil society of global scope.”

Abromov added: “We must extend the benefits of information and telecommunication technologies to every citizen in the world. We must bridge the digital divide and turn it into a digital opportunity.” In this vein, Zainul Abid Kottakulath of BBC News India gave a presentation titled “Hashtags of Hope: How Social Media has transformed the World into a Better Place” during which he discussed ways in which social media can draw global attention to an underreported issues, prompting government action and altering the focus of mainstream media.

Kottakulath also mentioned an interesting development. The Facebook Safety Check, which was launched in October 2014, detects when the Facebook user is located near major natural disasters, and asks whether the user is safe. The user can simply click the “I am safe” button, and Facebook will post this information to the user’s profile.

Facebook CEO Mark Zuckerberg commented in reference to the new application: “When disasters happen, people need to know their loved ones are safe. It’s moments like this that being able to connect really matters.” Kottakulath also stressed that social media has influenced the ways in which people engage in activism, often by using hashtags and sharing posts. Social media activism is often called “clicktivism” or “slacktivism,” and its effectiveness is a subject of much debate.

As the speaker explained, “Even though online campaigns make an impression in cyberspace, they are also perceived as being passive and lazy.” In another presentation titled “The Role of Social Media for NGO’s Working to Create Awareness Around and Prevent Online Victimization,” experts discussed the potential negative outcomes that that accompany the widespread use and advancement of social media.

Today’s Zaman asked the speaker, Professor Jaishankar Karuppan of Manonmaniam Sundaranar University, about the current problem of teams of Internet trolls (often referred to as AK trolls), who are commissioned to target and harass oppositional media by the ruling Justice and Development Party (AK Party).

“I think that some governments are against citizens who are politically active. It is something that happens in the US as well, when people like [Edward] Snowden reveal government secrets. [It depends] on who is tagging on which side of the fence. One man’s terrorist is another man’s freedom fighter, and this carries over online. So probably, what the activist is doing, the government sees as an attack,” Karuppan responded, adding that it is unethical on the part of the government to engage in attacks on social media.