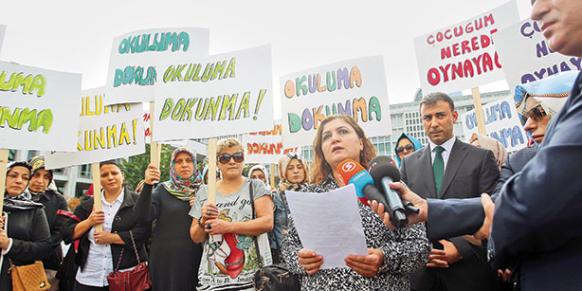 The municipality, which is run by the governing Justice and Development Party (AK Party), had earlier decided to construct a road through the courtyard of the school, which is affiliated with the Hizmet movement — one of the largest faith-based communities in Turkey.

Teams from the municipality arrived at the school around midnight and rapidly demolished one of the walls surrounding the courtyard and a security cabin nearby. Sources said the municipality did not send any written warning to the school administration about the demolition plans beforehand. What was more unusual was that the demolition took place at midnight and during Eid — an official holiday in Turkey.

The school’s parent-teacher association head, Nezihe Ehli, said schools are the places where the next generation is shaped. These institutions must be cared for as they are home to some of the best students in the city, Ehli added. Ehli also noted that Fatih College’s Merter campus had outstanding successes between 2005 and 2014, having champions in high schools entry exams, national and international scientific, sportive and cultural Olympiads and many awards from the Scientific and Technological Research Council of Turkey (TÜBİTAK). The school has been open for 20 years.

Neşe Solgun, a parent of a child at Fatih College, said the students will not be secure if there is no wall around the school and that it is meaningless to build a road through the middle of the school. “Why are they doing this work at this time?,” Solgun asked, saying that the municipality purposefully started the demolition now and not during summer vacation.