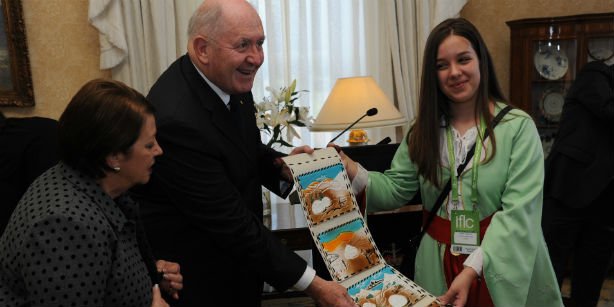 Australian Governor-General Peter Cosgrove is presented a gift by one of the contestants of the 13th International Language and Culture Festival. (Photo: Today's Zaman)

Australian Governor-General Peter Cosgrove hosted the students at his official residence with his spouse, Lynne Cosgrove, on Saturday. Saying that he was pleased to see Australia hosting this year’s International Language and Culture Festival, Cosgrove praised the initiative’s efforts for global peace during the students’ visit. “As we all know, the world is unsettled and is being faced with some serious challenges which can cause great division. … What we aspire for is a unified world, where people not only respect each other but embrace and display altruistic traits. It’s great to see those who share this vision of sustaining global peace have put this ideal into practice. Through their efforts we are seeing peace bloom in the lands they are serving; and it is through education that we have harnessed the talents of these aspiring individuals. It is great to see we are all working towards universal peace,” Cosgrove said.

The governor-general and his wife then accepted gifts the students brought from their home countries. The students sang songs in Turkish and English during their visit.

Australia will for the first time host an International Language and Culture Festival on Sunday. The festival is organized by Sirius Educational Institutions, which have been active in Australia for years.

The first 11 editions of the event were hosted in Turkey, but due to government hostility and the ongoing persecution of the Gülen movement, or Hizmet movement — which is involved in organizing the culture festival — the organizers have held the event in various countries since 2014 to avoid potential problems.

Turkish President Recep Tayyip Erdoğan has accused the Hizmet movement of attempting to overthrow his Justice and Development Party (AK Party) government, but has failed to present evidence to support this allegation.