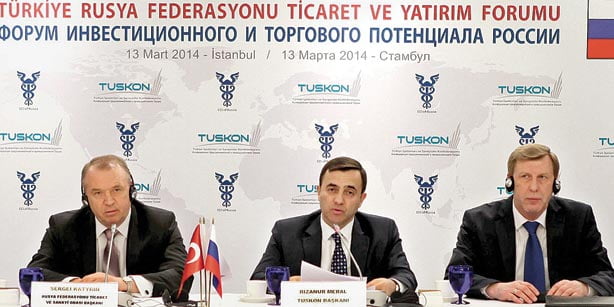 The Turkish Confederation of Businessmen and Industrialists (TUSKON) is deeply committed to improving and strengthening the bilateral trade between Russia and Turkey, Chamber of Commerce and Industry of the Russian Federation President Sergey Katyrin has said, adding that TUSKON is a longstanding friend of Russian businessmen.

The meeting was also attended by the representatives from the industry and commerce chambers from the Russian provinces of Moscow, Samara, Rostov, Tatarstan, Vologda and Lipetsk.

Katyrin said the two countries have good relations both economically and politically, with large potential for improvement ahead. He drew particular attention to the achievements of Turkish contractors in Russia, mentioning the construction work undertaken by Turkish companies building the Olympic facilities for the Sochi games. He said the Turkish contractors successfully managed to complete and deliver the works earlier than the due date without sacrificing quality.

In return, Russian companies have invested $843 million in Turkey, Katyrin claimed, before going on to say, “This pleases us and I would like to extend my thanks to TUSKON for the trade bridges they have constructed between the two countries.”

Katyrin touched on the problems faced in customs at the Russian border. Not only do Turkish businessmen selling products to Russian consumers complain about these hurdles at customs, but Russian businessmen have complaints about them as well, Katyrin said. Russian authorities are aware of the troubles that cause slowdowns in mutual trade and are working on steps to improve the conditions. “Actually, there have been improvements since measures were taken a year ago to increase the speed of passage through customs. I believe we will reach a better position in a short while. We also have to improve the technical infrastructure,” he said.

Speaking at the same meeting, TUSKON President Rızanur Meral drew attentions to the volume of the Turkish investment in Russia. Direct investment has exceeded $12 billion in total so far, Meral noted, adding that the value of the projects completed by Turkish contractors in Russia over the last two decades totals $40 billion.

Russian investment in Turkey has reached $9 billion so far, Meral also said, asserting that the level of investment is indicative of the trust both sides have for each other. It represents the broad range of strategic cooperation between Turkey and the Russian Federation, Meral added.

“Our trade to Russia in 2013 was $7.3 billion while imports came to $25.5 billion. In Turkey, we consider ourselves lucky to be the neighbor of a rich and powerful country like Russia that has extensive resources both above and below ground, experience in heavy industry and a population of 150 million,” Meral said.

Katyrin also talked about the importance of the Turkish language as a catalyst to boost the relations and said that there are 4 million Turkish speakers in Russia. Some state schools in Russia provide lessons on the Turkish language. “Just as we feel happy hearing people talk Russian in Turkey, we are also happy about Russians learning Turkish,” Katyrin said. These schools have not encountered any problems in the course of their teaching, he argued, and said they have full support for their educational activities.

The recent visit by a Turkish business delegation to Morocco has seen companies secure textile deals worth $30 million, the Turkish Confederation of Businessmen and Industrialists (TUSKON) has announced.TUSKON brought 44 members from the textile sector to meet 310 of their Moroccan counterparts at the Turkey-Morocco Textile Business Forum over the weekend. The forum was […]

ÖMER ŞAHİN – HANOİ Horizon International Bilangual Schools, founded in 2002, in Vietnam, opened its 5th campus. Deputy Prime Minister of Turkey Mr. Bulent Arinc cut the ribbon at the opening ceremony of the new school, which is K through 5th grade. Bulent Arinc, minister of state and deputy premier, paid an official visit to the Far East including […]