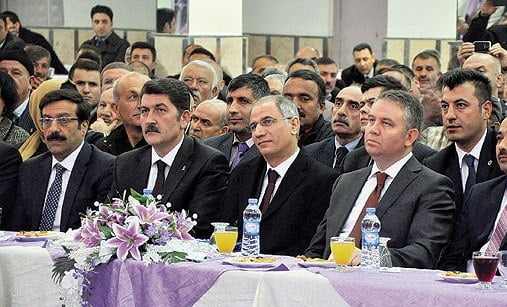 They were released after spending the night in custody.

The interior minister and people from Erzurum came together at a joint meeting held by the Justice and Development Party’s (AK Party) Sincan district branch and the Erzurum Solidarity Association. But a group of people staged a protest against Minister Ala and asked questions about his recent remarks concerning Gülen and the settlement process.

One man went up to Ala and asked: “Mr. Minister. I am also from Erzurum, like Fethullah Gülen.  Why did you ask him ‘Who are you?” in your speeches when there are tons of others who deserve to be asked this question?” After hearing the protester speak, Ala’s bodyguards pulled the man aside and asked for his personal information. The bodyguards also saw some people recording the incident with their mobile phones and warned them to delete the videos, according to witnesses.

Another protester, Mesut Tanhaş shouted a question at Ala, asking, “Mr. Minister, for how much did you sell Southeastern Anatolia?” Tanhaş and two others, including the man who asked Ala about Gülen, were taken into custody by police forces and then brought to the police station.

According to media reports, the three men were interrogated by two members of the National Police Department’s intelligence bureau and they were asked whether police officers had used violence against them. They were also asked questions about their professions. The three were later released.

Gülen’s lawyer has filed a lawsuit against Ala over his allegedly slanderous remarks targeting the religious scholar during his speeches. The lawyer says that Ala violated the personal rights of Gülen and made baseless claims.

Ala had called out to Gülen, saying: “You are denigrating the people — from where you are from — who are working for the sake of God. Who are you? Who are you? Are you strong enough to deal with this? Is this nation helping you in this? How dare you rise up and initiate a coup plot?”