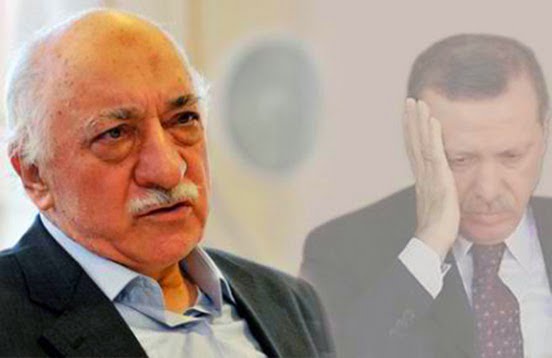 Gareth Jenkins once criticised Turkey’s infamous Ergenekon indictments on the grounds that they were “products of ‘projective’ rather than deductive reasoning, working backwards from the premise that the organisation exists to weave unrelated individuals, statements and acts into a single massive conspiracy.” Other than being a far more extreme example of “projective” rather than “deductive reasoning,” how is the Turkish government’s and its media’s attempt at connecting Turkey’s failed coup with Fethullah Gülen and the Hizmet movement he inspires (also known as the “Gülen movement”), any different?

President Erdoğan has been projecting Gülen and Hizmet onto almost every development in Turkey since the corruption investigations of December 2013. From the Gezi protests to the downing of the Russian jet, almost all past, present and even potential future impediments to the wishes of the ruling party are pinned on Gülen. Consider the night of the coup; within two hours of the tanks rolling, President Erdoğan called into CNN Turk. He said that he was unaware of the whereabouts of his chief of staff, that the national intelligence services had not only failed to intercept intel on the coup and inform him of it before it had happened but that he was unable to reach his head of national intelligence even after the coup was underway; so much so, that despite the overbearing state machinery in place, President Erdoğan was informed of the coup as it took place by no other than his brother-in-law. Yet despite being in the dark and without being privy to the necessary facts, in part as the facts were still unfolding, President Erdoğan was sure of one thing, that he would pin this squarely on Gülen and Hizmet. If that’s not projecting, I don’t know what is.

Yet what disappoints me most is not President Erdoğan but the willingness of the Turkish intelligentsia to uncritically internalise the President’s accusations, especially those whom rightly criticised the evidentiary failings of the Ergenekon and Sledgehammer trials; should they not be the very people to caution the country now against this collective déjà vu? What exactly is the weight of the evidence linking Gülen to the coup? Where is the judicial due process that has determined the culpability of Gülen and Hizmet? What is the point of a judicial investigation when its main objective of determining the culprit has already been pre-judged?

Gülen and Hizmet have not only been pre-judged but are being pre-punished even before any preliminary judicial investigation into the coup. I fear that by the time the judicial investigation into the failed coup is complete, there will be no Gülen or Hizmet left to prosecute; I suspect that is what the President and Turkish government would like to see. That so many use the term “FETO” (Fethullah Terror Organisation) when there is not a single court ruling, even now, on the existence of the thing, demonstrates my point about complete disregard for due process and the rule of law. Do we not recall that even when the Turkish government supported the Ergenekon trials, pundits were forced to refer to it as “the alleged Ergenekon organisation” to avoid being sued by the suspects of those indictments? What does it say of the motives and principles of those who claimed to defend the Ergenekon and Sledgehammer suspects in the name of justice and due process, when they so willingly betray those same principles and positions today?

As I have said before, don’t defend Gülen or Hizmet, but defend due process, the rule of law, judicial independence and the right to be heard in the face of overwhelming power. In the light of the tsunami of arrests and dismissals of journalists in Turkey, the cancellation of their press cards and passports and arrests of family members when the journalists themselves cannot be found, who is now able to challenge the Turkish government’s narrative about the attempted coup? Who can challenge the working assumptions within the executive, judiciary and intelligence services in Turkey? How can we know fact from fiction, distinguish claim from evidence? Turkey has fallen so far that even civil society and the media are unable or unwilling to offer an alternative perspective to that of the government. Al Jazeera’s “Gülen’s fingerprints in Turkey’s failed coup” is an example among many. The piece merely lists and explains the government’s most commonly cited five “pieces of evidence” to incriminate Gülen uncritically and does not provide a right to reply. These five pieces of “evidence” are being repeated in Turkish and in some foreign media, so they merit evaluation.

The commonly cited five pieces of “evidence” (hereafter “claims”) are italicised and listed below by as explained by Al Jazeera. I evaluate each claim in turn in a point-by-point basis by posing questions and counter-perspectives. With limited time, resources and classified files that are unreachable, there is only so much that can be said. As a result, I am posting this as a ‘working blog’ that I will update based on feedback received from readers. Also, readers are welcome to suggest new or alternative hyperlinks to those inserted below. Methodical deconstruction is time consuming; I apologise therefore in advance for the length of what follows.

The first sign of “Gülen’s connection” with the coup came from the streets on the night of the coup attempt: Among the ones, who participated in the coup attempt along with the putschist soldiers, were ‘police officers who were prosecuted as part of the investigations regarding the Gülen’s organisation’s parallel structure but could not be found’. One of those under prosecution, former police chief, Mithat Aynacı was captured in an armored vehicle in front of the Istanbul Police Department. The fugitive police chief was in military camouflage when he was caught.

There were other police chiefs among putschists that night as well. Wanted former police chiefs Lokman Kırcalı and Gürsel Aktepe were among the soldiers captured in front of the Ankara Police Department. In his statement, Gürsel Aktepe said he has sympathy for Fethullah Gülen, adding that ‘he had gone to the US on a mission as part of his career, that he had stayed in Gülen’s house for two days there and attended his conversation gatherings’. Stating that he received a monthly financial support of 4,500 Turkish liras after he was be ostracised from profession, Aktepe said that on the night of the coup he received a message telling ‘everyone to go to their former places of duty’ and so he went to the front of the Ankara Police Department. Aktepe said “It is impossible for the coup attempt on the night of July 15th to have taken place without the knowledge and order of the top leader of this organisation, Fethullah Gülen.”

One of the most important developments, which reveals Gülen’s connection with the coup, took place within the Turkish Armed Forces (TSK). Statements by the Chief of General Staff Hulûsi Akar’s aide, Lieutenant Colonel Levent Türkkan have once again exposed this connection. Türkkan was the leader of the group which detained the Chief of General Staff that night. Türkkan, who names himself a member of the Gülen organisation, said that there was an “older brother” named Murat who was in charge of him. Adding that he was the child of a poor family and met with Gülen organisation’s older brothers while he was at junior high school, Türkkan also said he had been given the exam questions before he entered the Işıklar Military High School’s admission exams in 1989. He also told that while he was serving as the Assistant Adjutant of the former Chief of General Staff Necdet Özel, he planted a bugging device, “which Brother Murat gave him”, in Özel’s room.”

Claim 2 and 3 are evaluated together since both relate to so-called confessions. Please see below.

Claim 3 – Brigadier General Sağır: I had served the organisation for 10 years

One of the most notable information exposing the Gülen organisation’s connection with the coup attempt was a name on the putschists’ tasking list. That name, which the public had already been familiar with, was Brigadier General Hamza Celepoğlu. Although he is currently in prison as part of a case regarding the stop-and-search of Turkish intelligence agency trucks, Celepoğlu was on the junta’s ‘tasking list’. Next to his name it says ‘ Gendarmerie General Command, Department of Inspection” as his post-coup place of duty. The indictment prepared against him stated that Celepoğlu “was acting as part of the Gülen organisation’, which reveals ‘Gülen’s connection’ not only with the coup attempt, but also with the stopping of the Turkish intelligence agency trucks.

One of the most striking information about ‘Pennsylvania’s connection’ with the coup can be found in Chief of General Staff Hulûsi Akar’s statement. According to the statement Akar gave to the prosecutor, the putschists asked him to sign the coup declaration that night and told him ‘I you want, we can get you in touch with our opinion leader, Fethullah Gülen”. In his statement, Akar said the person who made this proposal to him was Brigadier General Hakan Evrim, the commander of the Akinci Air Base, the command center of the attempted coup.

*Özcan Keleş has been chairperson of the London-based Dialogue Society since 2008 and is a non-practicing barrister as well as a full-time Ph.D. candidate in the sociology of human rights at the University of Sussex.

25 April 2012 / JAMES C. HARRINGTON Much of what Dan Bilefsky and Şebnem Arsu’s recent article in the International Herald Tribune (“Shadow Force Grows in Turkey,” published on April 18 describes about Fethullah Gülen and Turkey’s recent history is accurate, but the authors cast a shadow of innuendo and loose conclusions, apparently more driven […]