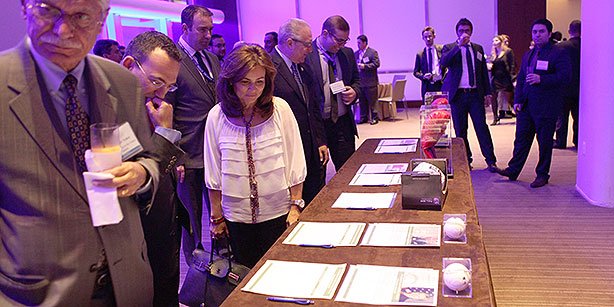 Over half-a-million dollars was raised during the event, organized by the Peace Islands Institute. (Photo: Cihan)

In the event organized by the Peace Islands Institute (PII) over half-a-million dollars was raised to finance the group’s activities in the wider New York area. The institute is one of the largest Turkish organizations in New York and New England, fostering dialogue and promoting diversity.

Boxing gloves signed by world-famous boxer Muhammad Ali and “Rocky” star Stallone were among the goods sold at the auction to support the PII’s future projects.

Baseball balls and photos signed by President Obama, former Secretary of State Hillary Clinton and former President Bill Clinton were sold during the fundraising dinner. New York Senator Kirsten Gillibrand congratulated the fundraisers with a message she sent to the event.

PII Advisory Board member Leonard Petlakh commended the works of Turkish Islamic scholar Fethullah Gülen, and said he admires the Gülen movement, from which the Peace Islands Institute is inspired. Petlakh said the movement underscores transforming diversity into riches and works to build bridges between different peoples, faiths and cultures.