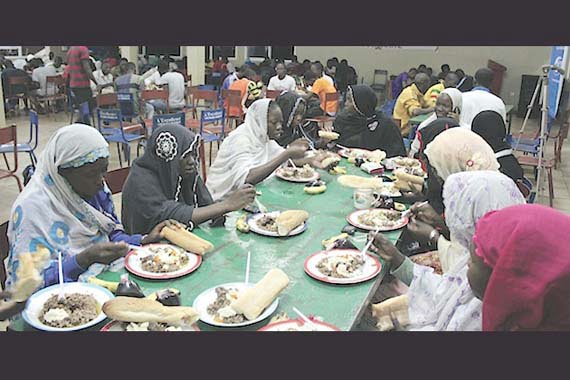 We were at an iftar dinner at the cafeteria of a medical school in Mali’s capital city, Bamako. A total of 600 male and female students from villages are staying at the school dormitory. The number of the well-off among them is pretty low. The iftar event marking Ramadan let everyone cheer up.

Medical students coming from across the country to study medicine were hosted at the iftar dinner co-organized by Kimse Yok Mu Foundation and Mali Yardim Zamani (Time to Help) Foundation.

Situated in the western Africa, Mali is one of the countries of the Dark Continent with the poorest population. %90 of the 13 million population has survived as Muslim, despite the country’s past under French colony. The population is dominantly engaged in agriculture. Western countries are operating the country’s natural resources such as gold and uranium. Mali, known as one of the most prosperous countries of the world in the past, is looking for the reason-why it’s lagging behind the rest of Africa with its poor development level- in education. The Malian people with 68% rural population now wish their children to beat their ill-fated situation. Number of the students from villages, therefore, is continuously increasing.

We were at the kitchen shortly before breaking time. Three Malian women and two Mali Yardim Zamani foundation volunteers were excitedly rushing to set the dinner on time at the kitchen of the school dormitory. The two young Malians helping there grabbed our attention. Adem Cerrah is one of the 6 thousand students at the medical school. What is special about him is that he is the head of student council at the same time. He is currently a senior student. We asked him why he’s there. “I’ve come to serve my friends” Adem said adding being a council head was not an excuse not to contribute there. Adem believes this year’s Ramadan is going a lot better than before. Highlighting the joint iftar dinners by KYM and the Malian foundation throughout the month, “We are so grateful to Turks. Our country is currently going through a troubled time. We are financially in a poor situation. They’ve come to rescue on such a timing. It’s an honor for me to help them in this blessed month.” Adem said.

The parents of Adem, who managed to get admission to the school coming all the way from his village, are financially poor. So he is trying to live on the $100-scholarship from the state. Financial strains made him cut down suhoor (pre-dawn meal in Ramadan) as well. He said he had a piece of bread and some coffee for his suhoor the other night. But he doesn’t mind it. “Barakallah! Alhamdulillah!” came out of his lips.

He sends half the $100 scholarship to his family

Masaudu Paumeda is coming from a village of Sikasso city to study in the capital city. He is a junior law student. Putting on his KYM volunteer t-shirt, he volunteers in iftar dinners every night. He immediately signed up when he heard about the iftars. “This Ramadan is going quite different. I feel so happy and peaceful. What else can I wish for! ” Masaudu said. He somehow manages to cut down and sends half his $100 scholarship to his poor family in the village.

When it was time to break the fast, first, a cup of tea and a date for each were served everyone at the tables. And next were beef with beans, some bread and a small banana. As the dinner went on, a glitter was infusing into the looks in the eyes and joy into the words.

Speaking of the 11th International Turkish Language Olympiads, the Malian Minister of Culture Bruno Maiga said, “Here today, the Honorable Fethullah Gulen‘s vision is coming true”, in his speech met with the loudest applause at the cultural festival held in Izmir for the first time. Noting that students from 140 different countries have formed a […]

BURSA African businessmen and ambassadors stress that they have developed trade relations with Turkey thanks to Turkish schools acting as bridges in their countries, although the ruling Justice and Development (AK Party) government is planning to shut down Turkish schools abroad that are affiliated with the movement of Islamic Turkish scholar Fethullah Gülen. Speaking […]