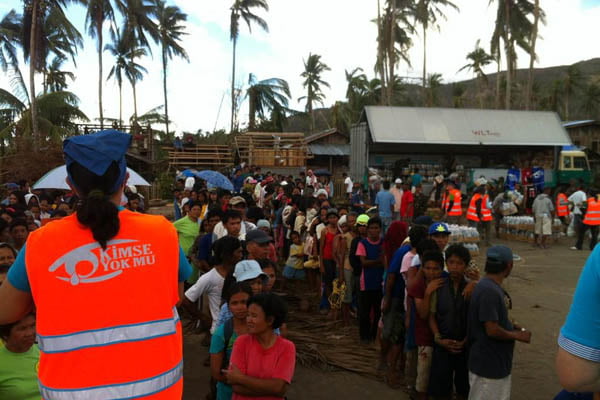 Having earlier delivered Turkey’s relief aid to the Filipino flood victims, Kimse Yok Mu Foundation now gears up for a polyclinic and an orphanage as a part of its permanent aid initiatives in the region.

Cemil Basbay, director of KYM Samsun chapter, said they’ve been reaching out to thousands daily. He said the foundation was the first international organization to arrive in the region in the wake of the Haiyan Typhoon and still keeps on its efforts. The aid and relief efforts have been available nonstop for nearly four months now. In addition to the providing basic daily needs, the constructions of KYM polyclinic and orphanage are soon to be finished, the director said.

“We haven’t left the Filipinos alone”

Life goes on in the Philippines, hit by the typhoon back in November leaving thousands dead or homeless. Basbay said they are currently the only relief organization still active in the region. “Mister Chua, one of the prominent deputies in the region, has joined us in our aid distributions. He said, ‘I would like to thank KYM on behalf of my country. You’ve been here since the very first day and never left us alone. Most of the others left here after two weeks or so. But it’s great to have you still here.’ We have been taking monthly turns on duty. Our foundation assigns officials here every month.”

Speaking of the permanent aid initiatives, Basbay further said, “We will deliver a fully equipped ambulance in mid-March. We also have a school project under official processing. We have been working hard to make it available to the Filipino children as soon as possible.”

Since the start of the offensive, the Kimse Yok Mu foundation has worked to bring in much-needed aid and assistance, and it is still a point of hope for many of those whose lives were shaken by the conflict. The organization has so far helped bring food, supplies and medicine to local hospitals, and it has recently provided around $500,000 in aid.