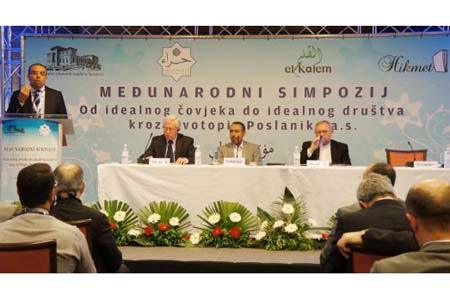 The conference titled “Ideal Human and Ideal Society in the Thoughts of Prophet Muhammad” organized jointly by the International University of Sarajevo (IUS) and the journal Hira came to an end after the day-2 sessions on April 14.

One of the speakers of the day, International African University Rector Prof. Hasan Mekki put an emphasis on the need for a brand new approach towards educational system and mosques in the Muslim world. “Mosques and madrasas used to be at the center of every activity and action. Inter-communication in the Muslim world should be arranged and Islamic education and raising should be reconsidered in accordance with the actual needs. Efforts should be made to calibrate our hearts and minds and to mutually build the hearts of the Muslims” Mekki said.

Professor Cemal Havsebi from Saudi Arabia underscored that the major problem the Muslim world is facing in today’s world is the shortage of educated people. Noting that the Muslims fail to present their civilization and cultural heritage well, Havsebi said, “If we resolve our deficiency in love and faith and communicate better with the world, we can explain our heritage better. The main weakness of the Muslim world we are living in is education. This is indeed the problem of the entire humanity that cannot be confined to a single Muslim nation. The Muslim community, unfortunately, lacks educated people today. You should have a clear vision in education in order to keep up with the changing world and its systems along. The Hizmet Movement, the education system and schools inspired by Fethullah Gulen are prime examples and significant experiences to remove these deficiencies.”

The Bosnian professor Zuhdija Hasanovic highlighted individual spirituality as the prerequisite to build a robust community. Hasanovic further commented that the humanity paralyzed with self-alienation and a serious moral crisis has to realize its spirituality and raise spiritually strong people.

Another professor Ahmet Galul, from Tunisia, gave a presentation titled “Historical conditions and Prophet Muhammad”. Arguing that the goal of a religion is to avoid conflicts and lack of order, Professor Galul said the best example-in terms of both thought and action-humanity has seen is the Prophet Muhammad (pbuh). And only if he is educated properly in line with the Prophet’s tradition can the contemporary human recover from crises. Galul referred to the Hizmet Movement, which has introduced a new perspective to the Muslim world through its educational and dialogue activities, as a successful system strengthening civil and social relations.

At the conference titled “Ideal Human and Ideal Society in the Thoughts of Prophet Muhammad” organized jointly by the International University of Sarajevo (IUS) and the journal Hira, propositions to solve the problems of the contemporary world in the light of the Prophet Muhammad’s life were discussed during the two-day conference. Nearly 30 scholars and academics from countries including Turkey, Bosnia Herzegovina, Egypt, Saudi Arabia, Algeria, Morocco and Sudan had the opportunity to visit historical and cultural attractions of Sarajevo and Mostar as well as involving in an international conference in Bosnia Herzegovina, home to the largest Muslim community in the heart of Europe.

The speakers of the conference highlighted the fact that Fethullah Gulen and the Movement is well-known in Bosnia, in particular, and around the world. They noted that Gulen authored tens of works offering remedies for crises of humanity in the light of the Prophet Muhammad traditions and that he is a prominent scholar of our age and a man of action inspiring educational institutions worldwide to raise ideal person.

ALİ İHSAN AYDIN On the last day of a conference titled “The Changing Islamic World: Contributions of the Fethullah Gülen Movement” held in London, Gülen’s interfaith and inter-cultural dialogue activities were discussed. During the discussions, it was strongly stressed that Gülen opposed the “clash of civilizations” thesis through dialogue endeavors launched years ago. American academic […]