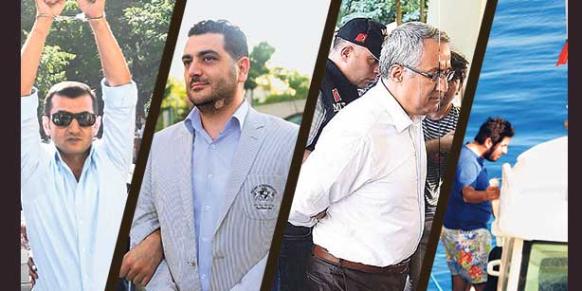 As many as 100 high-ranking members of the police force were detained in a large-scale operation which began late Monday night/early Tuesday morning in over 20 provinces as part of the government’s attempt to contain an embarrassing graft scandal which has implicated several ministers and dozens of pro-government businessmen.

The operation has been described as unlawful, as the Turkish Penal Code (TCK) and the Code on Criminal Procedure (CMK) prevent police from conducting raids on venues before dawn.

According to initial reports, 40 officers were detained by counterterrorism departments and 15 others by organized crime units. Later on Tuesday, more than 30 suspects were also detained in widening operation. With the detention of former İstanbul Police Department Intelligence Bureau Chief Ali Fuat Yılmazer, the number of detained suspects has reached to 100. Prosecutors ordered the arrest of at least 115 suspects.

The İstanbul Chief Public Prosecutor’s Office noted in a statement that the officers were accused of making up an investigation into an alleged terrorist group named Tawhid-Salam as a pretense to tap the phones of Prime Minister Recep Tayyip Erdoğan, ministers and the head of the national intelligence agency.

“The order was given for the capture and detention of 76 police officers who were investigating a group called Tawhid-Salam but whose actual aims were spying,” İstanbul Chief Public Prosecutor Hadi Salihoğlu said in the statement.

He said the Tawhid-Salam case, targeting 251 people, had been dismissed due to a lack of evidence after a three-year investigation during which 2,280 people were wiretapped.

The order was given by the İstanbul 2nd Penal Court of Peace, which only began working less than a week ago. The head of the court, Hulusi Pur, came to prominence in mid-February when he decided to release six leading suspects in the corruption operation.

Prime Minister Erdoğan, while speaking to reporters on Tuesday, said the “operation may jump to other fields,” implying that more detentions from various professional groups are looming, but did not elaborate.

Justice Minister Bekir Bozdağ said he did not have any information about the operation. “I am following [the operation] through the media,” he said.

Among the detained officials is Ömer Köse, who had been presiding over the İstanbul Police Counterterrorism Unit and was removed after the graft operation on Dec. 17. Former İstanbul Financial Crimes Unit Deputy Chief Yasin Topçu is also among the police officials detained. Topçu was on duty when prosecutors ordered the second wave of the corruption operation against nearly 50 suspects, including Bilal Erdoğan, the son of Prime Minister Erdoğan, on Dec. 25. Topçu was taken from his house in Halkalı.

Among the other detainees are Yurt Atayün, former head of the İstanbul Police Department’s Counterterrorism Unit, as well as former Deputy Police Chiefs Kazım Aksoy, Ramazan Candan and Gafur Ataç.

Most of the detainees were handcuffed as they were leaving the hospitals to which they were taken for health screening. Handcuffing is an unusual practice for suspects under detention.

The suspects are accused of fraud in official documents, abuse of authority, illegal wiretapping, illegally obtaining documents related to state security and violation of privacy of communication.

The operations came two days after the prime minister talked to the media about a plan to assign “super judges” to tackle a looming operation against the Hizmet movement. Super judges, or penal judges of peace, refer to judges who have been granted a broad array of powers through a recently approved omnibus law introduced by the AK Party. These judges are criticized for being endowed with broad powers over investigations and other courts’ rulings.

The prime minister didn’t make it secret that his government was planning a sweeping operation against the Hizmet movement after months of “evidence-gathering” against the movement. Many observers believe that the operations are a way for the government to discredit the recent corruption scandal.

The Hizmet movement promotes interfaith dialogue and the resolution of problems through peaceful means throughout the world. However, Prime Minister Erdoğan’s AK Party has recently been engaged in a bitter fight with the movement. This conflict intensified after Dec. 17, 2013, when a major government graft operation became public. The prime minister claims the operation was orchestrated by the Hizmet movement, which intended to overthrow his government. However, he has not provided any evidence to prove his claim. The movement denies the accusation.

According to news reports, the operation was scheduled for the early morning hours of Tuesday but it was moved to Monday at around midnight after plans for the operation were allegedly leaked. The reports also alleged that some pro-government journalists were notified to arrive to their workplaces early on Tuesday to cover the operation.

There are rumors that Prime Minister Erdoğan, who is critical of the release of several suspects accused of planting bugging devices in his office in late 2012, gave the order for Monday’s operation against the police officers. A total of 11 suspects were detained in early June on accusations of planting covert listening devices in the prime minister’s office, but they were later set free. The prime minister claims — without providing any evidence — that the devices were planted by Hizmet members.

Since Dec. 17 more than 40,000 police officers, civil servants, judges and prosecutors have been reassigned for no official reason other than their suspected links to the Hizmet movement. Critics have described the arbitrary reassignments as a “witch hunt.”

In a public address in May, the prime minister effectively confessed that he was carrying out a witch hunt. Commenting on the reassignments, the prime minister — without providing the slightest shred of evidence — accused the reassigned officers of “betraying Turkey” because of their suspected alliances with the Hizmet movement, which he currently views as, “enemy number one.” “If reassigning individuals who betray this country is called a witch hunt, then, yes, we will carry out a witch hunt,” Erdoğan said.

Some of the police officers were handcuffed while on their way to provide testimony as part of the operation. Images of the handcuffed officers sparked public outrage.

Police called former İstanbul Police Department Counterterrorism Unit head Atayün by telephone to testify as part of the anti-Hizmet probe. Atayün turned himself in and was taken for a health screening by the police. As he was returning from the screening, the former police chief had his hands handcuffed behind his back. “I did not flee; I turned myself in. But they cuffed my hands behind my back… My detention is politically motivated,” he told reporters.

Police sources said Atayün was handcuffed after he refused to obey police orders. Atayün’s lawyer, Niyazi Atasoy, however, denied the claims. He said his client was handcuffed to allow press members to take his photos, so as to portray him as a criminal in the media.

Atayün’s brother, Anadolu Atayün, said the handcuffs are a “source of pride” for his brother. “We will file a criminal complaint against those who handcuffed my brother,” he stated.

Hayati Başdağ, former deputy head of the intelligence department of the National Police Department, was also handcuffed after he was detained. While on his way to a hospital for a health screening, Başdağ raised his handcuffed hands and said: “I did not steal. I did not take a haram bite [i.e., wrongfully gained earnings]. I did not do anything illegal.”

The lawyer for the former head of the İstanbul Police Department’s Counterterrorism Unit, Ömer Köse, told the media that his client was also handcuffed for no apparent reason after he was taken into custody. He said his client did not challenge police orders, which some claimed was the reason behind the handcuffing incident. “They [police] handcuffed Köse as they were leaving the hospital. We could not understand why they handcuffed my client. There was no problem,” the lawyer stated.

Köse’s mother, Menşure Köse, reacted to the detention of her son. She told reporters that her son was neither a thief nor a bandit. “He has worked for his country. If he were working for himself, he would be a rich man. We are living in a rented house,” she stated. The mother also asked her son not to be embarrassed about being detained. “Never be ashamed of yourself. You did not steal anything. You did not rob anyone. You did not kill anyone. You did not sell your country out,” she told her son.

Kemal Şimşek, a lawyer for Ömer Köse and Özgür Açıkgöz who spoke in front of the National Police Department building, said that neither of his clients had ever been investigated over the slightest irregularity during their careers, and have even been the recipients of various honors and awards. He said that the operation which has led to their detention was based on false news reports, and the new officers appointed to the Anti-terrorism Unit have exposed every bit of information about the illegal Selam Tavhid organization, which was aiding and abetting criminals. He also claimed that this organization is behind many of Turkey’s political assassinations, including the deaths of journalist Uğur Mumcu, academic Bahriye Üçok and journalist Ahmet TAner Kışlalı. “What is being done to my clients is unlawful and unconscionable,” he said.

Prosecutor Zekeriya Öz, who was removed from the major corruption investigation targeting some government officials and civil servants, reacted harshly to the operation against the police officers. In his tweets, he said, “Weak men who are unable to save the hostages from the hands of the Islamic State of Iraq and the Levant [ISIL] are slandering and detaining police officers to cover up their theft.”

The Turkish government has cut off funds granted to Rafia Nur, a 12-year-old child whose father has been arrested over alleged links to the Gülen movement. The lower half of Rafia’s body is paralyzed, impairing her ability to walk or stand.