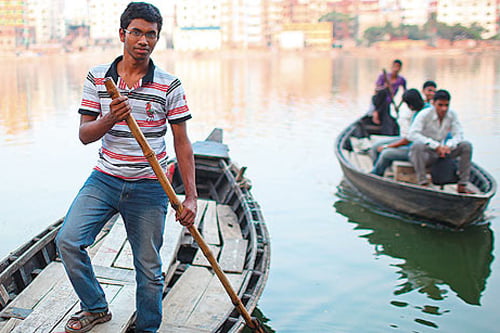 Late summer heralds the arrival of Turkish language season in Anatolia. Teachers and students from all over the world pour into Turkey, each of them presenting their talents and skills onstage. Children of various backgrounds and nationalities recount fables, recite poems and sing songs across various parts of Turkey.

Ahead of the approaching 11th International Turkish Olympiads, Sunday’s Zaman seeks out former participants of this popular event in past years. The Olympiad winners of the past are now successful bankers, teachers and businessmen; they are examples in their respective fields and holders of great achievements.

Tologonay Kalmuratkızı studies in Bishkek but her family lives in Talas, where people extend a warm welcome to visitors, just like Kalmuratkızı’s father, Kalmurat Sadırov (46). Kalmuratkızı, who participated in the Turkish Olympiad in 2007, studied at Sebat Talas High School for five years. She took part in the essay category of the competition where she came in second. She currently studies translation-interpretation at International Atatürk-Alatoo University. Last year, she translated the movie “Babam ve Oğlum” (My father and my son) from Turkish into Kyrgyz and attended the movie screenings in various parts of the world including Turkey and the US. Kalmuratkızı’s only wish now is to finish school and start her graduate studies at Boğaziçi University in Turkey.

Aisulu Tynyshyova (23) is one of the first graduates of the International Meerim-Sebat Talas Girls’ High School. Tınışova represented her country in the second Turkish Olympiads and won a gold medal in the Turkish grammar competition. Tynyshyova’s elder brother had earlier gone to a Turkish school and when he was mad, he would yell at her in Turkish. She told him that she would learn Turkish so that she could understand what he was saying. The things Tynyshyova remembers about Turkey are the excitement she felt during the contest, the friendships she made and the rich Turkish breakfasts. She has never forgotten the breakfast her teacher Serkan Başak’s parents prepared for her. After completing her undergraduate studies in Malaysia, Tynyshyova returned to Kyrgyzstan where she started working with Demirbank, one of the largest private banks in the country.

Canat Temirbekova is one of the winners of the Olympiads in 2008 in the writing category. She is also one of the first graduates of the high school in Talas and is studying on a scholarship. The Turkish language opened up windows of opportunity for her after leading a modest life with her family. Because of the Olympiads, Temirbekova was able to travel to Turkey. Everything was a first for her after boarding the aircraft to Turkey. She is currently studying at the department of Chinese language at International Atatürk-Alatoo University in Bishkek.

Bangladesh is Turkey’s sister country which extended great assistance during Turkey’s national struggle for independence. Turkish teachers later arrived in these lands decades after to set up a school and teach Bangladeshi children. One of these young talents is Maliha binte Mustafa, who eagerly opens the door of her home in Dhaka. Her little sister, Munira binte Mustafa, is also studying at the Turkish college. Her father, visibly proud of his children, jokes that “they sometimes speak Turkish because they do not want us to understand what they are saying.”

Maliha, who traveled to Turkey for the first time in 2006 to participate in the fourth Olympiad, is now studying medicine. Maliha won a gold medal in the Olympiad and was also ranked sixth in the poetry category that year. Her greatest desire and love is Turkey; she is considering traveling to Turkey with the Pakistani and Indian friends she met during the competition.

The Turkish school students organized a ceremony to welcome Prime Minister Tayyip Erdoğan during his visit to Bangladesh, and Maliha was chosen to recite a famous Turkish poem, “İstanbul.” The audience including Emine Erdoğan, the spouse of the prime minister, was touched by her recital.

In Bangladesh, Rifatul Hassan is in a Turkish restaurant in Dhaka because he has never forgotten the taste of Turkish dishes. Hassan, who studied at the Turkish school, participated in the sixth Olympiads and won a gold medal in the speaking category in which he mimicked famous comedians Cem Yılmaz and Recep Demirkaynak. Hassan has a soft spot for Erzurum, which he visited during a tour after the contest. Recalling that he saw snow there for the first time in his life, Hassan was so awestruck that he ice skated at minus 30 degrees Celsius even though people in Bangladesh typically fall ill at just five degrees. After graduating from his school, Hassan wants to go to college in Turkey.

Cristina Nedelca, who participated in the fifth Turkish Olympiads and won a gold medal in the speaking category, is very fluent in the language. The judges were particularly shocked when she used expressions and words that mostly only a Turk would use. Thanks to her success in the contest, she also received a special award from the Turkish Parliament. She never forgot the Turkish language after the contest and even served as the host of the regional contests held in Romania. Nedelca, whose mother is a judge and father is a lawyer, decided to study law.

Selma Laia, a graduate of the Romanian Computing High School, is one of the winners of gold medal at the fourth Turkish Olympiads. She still remembers an encounter she had when she went to İstanbul University for enrollment: “There was a Georgian student in the class who said she knew me. It turns out that we had participated in the same Turkish Olympiad before and met in the same college years later.”

The Olympiads hold a special place in the life of Leyla Kurbanova from Georgia. She finally participated in the contest that she had dreamt of for a long time in 2011 and won a gold medal in the event. As she was attempting to leave the stage after her poem recital, one of the organizers told her that the Turkish prime minister had arrived in the hall and that she had to go up on stage again. She recited the poem once more, winning the hearts of the audience including the prime minister. Kurbanova is studying at Private Demirel College in Tbilisi, and her goal is to go to college in Turkey and pursue a degree in the field of media.

Vano Dvalishvili, who is studying in a Turkish school in Kutaisi, Georgia, is a true lover of Turkey and Turkish. Dvalishvili took part in the singing category during the seventh Olympiads and is now an honorary ambassador of the Olympiads in his school.

Dvalishvili’s father serves in the Georgian army and he and his wife hosted us in their home filled with books and adornments. His parents were extremely warm, saying to Sunday’s Zaman, “We are now your family in Georgia. ”

Shukri Mahat, who is studying at the Turkish school in Nairobi, participated in the seventh Olympiads and won a silver medal in the poetry recital category. She always practices her Turkish thanks to the Turkish teachers around her.