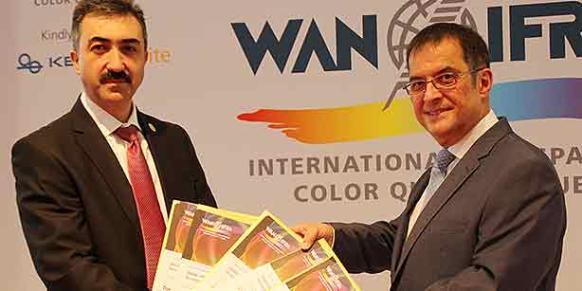 The Zaman and Today’s Zaman dailies, as well as three Zaman supplements, have received perfection awards from the World Association of Newspapers and News Publishers (WAN-IFRA), which were announced at the World Publishing Expo 2014 in Amsterdam.

During the exposition, the results of the International Newspaper Color Quality Club (INCQC) — which is the only worldwide quality printing competition among newspapers, held biennially — were announced.

Manfred Werfel, deputy CEO and executive director of production of WAN-IFRA, explained while speaking at the awards ceremony that the perfection prize requires a newspaper to provide constant high standards over a three-month test period.

According to Werfel, “Zaman receiving the award in three consecutive terms means that the daily has pursued the same quality standards not only in the three-month-long test period of the competition, but during the whole time of the past six years. In addition, Zaman did not compete with a single printing entity but with productions from its five entities. This is really great.”

Nevzat Güner, the deputy director of Zaman publications, said that WAN-IFRA-winning newspapers also gain two years of membership in the INCQC.
“Our newspaper winning the perfection award for its quality with five of its publications, and three times in a row, is a source of pride for us. Such success is only possible when you achieve high performance in five essential elements of the publishing sector: raw material, machines, entities, staff and the business, all at the same time. For example, if your employees have not received necessary training, no matter how good your entity, machines or raw material are, you cannot reach success. Of course, years of experience has played a major role in this. Our newspaper made a great investment move in 2004, renewing its pre-printing, printing and post-printing machines. We also chose our operators from among graduates of vocational high schools and universities,” Güner said.

Commenting on the awards, Zaman Quality Coordination Manager Muharrem Yaşar said Zaman has become the most award-winning newspaper of the year, when the number of its entities and publications that received the award are taken into consideration.