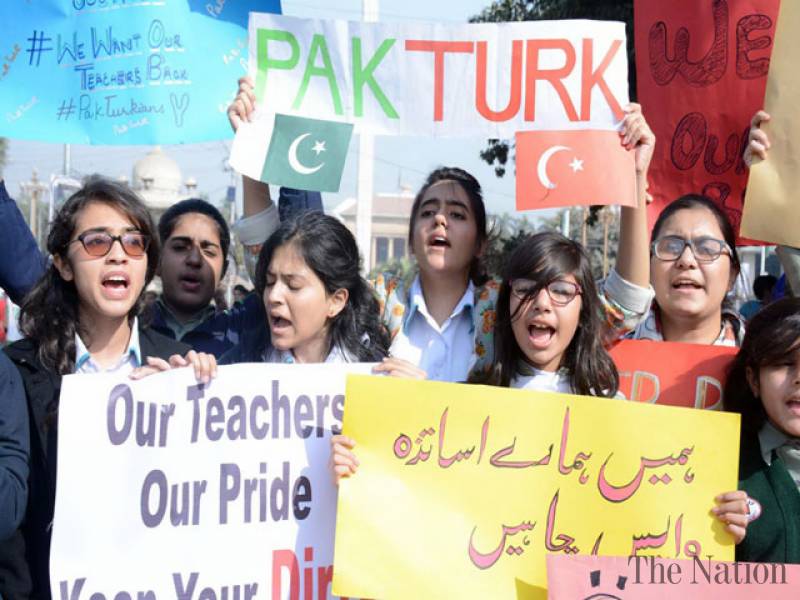 Historically, Turkey has indeed been a brotherly nation to Pakistan for a long time. However, president Erdogan’s mis-placed anger and political obsession against respectable Hoja Effendi Fethullah Gulen (a well recognized peace promoting universal humanist, scholar and the brain behind the philosophy of universal education) since 2016 or before does not under any circumstances justify Pakistan to jeopardize and deprive high quality education and a better future of thousands of our own children in Pakistan.

Pak-Turk International Schools and Colleges have been part of a currently well recognized network of the highest quality educational institutions spanning around the world and already popular in over 120 countries. In Pakistan, these schools began in 1995 and the first Pak-Turk School was set up in Islamabad in 1997. The network had thus grown significantly since, and there were 28 schools spread across Pakistan with estimated number of students in all the campuses being around 12,000.

Pak-Turk schools have unfortunately come under unjustifiable and consistent attacks since 2016 by the Turkish government demanding closing down of the entire network following the failed military coup (wrongly being blamed on the supporters of Hoja Effendi Fethullah Gulen) to overthrow the Turkish President Recep Tayyip Erdogan. There can not be and there is no evidence that a humanistic scholar in the likes of Hoja Effendi Gulen could ever be involved in such a criminal plot when he has lived in USA  over the decades.

Very recently in December 2018, the Pakistan’s SC gave a judgement  of going along with Erdogan as if the children’s schools were involved  and were meddling in Turkey’s internal political turmoil of 2016 coup without even investigating the underlying unrelated facts. Pakistani SC decided for Pakistani government to hand over the management of these schools to an inexperienced foreign owned MA’ARIF Foundation with only two years of experience. While Pak-Turk Education Foundation (PTEF) was a not for profit guaranteed Pakistani company, registered with the Securities and Exchange Commission of Pakistan (SECP) under Section 42 and ran 28 of  these pre-school to college level institutions in multiple cities of Pakistan educating more than 12,000 students.

Pak-Turk  Schools attracted students from varied backgrounds  providing affordable  and high quality education to all segments of the population with significant amounts of scholarships being awarded to deserving students, enabling them to acquire quality education and enhance the quality of their life. Highly regarded for their educational excellence, these schools are located world-wide and have over 20 years offered the very best of competitive standards. How can any government allow damaging their very own successful educational system due to internal political turmoil of another country even if brotherly to Pakistan?

I  respectfully appeal the Supreme Court of Pakistan and the PTI  Government in Pakistan to review their decision and to keep the facilities, board, administration and the faculty of the Pak-Turk educational institutions intact. Furthermore, in such a sad predicament, I certainly request Imran Khan, our esteemed Prime Minister to personally help facilitating reconciliation internally in Turkey since this issue negatively impacts the future education of  millions of children and the quality of their life in over 120 countries.

Operating 10 different schools with a total of 5,000 students, the association which was established a decade ago draws high praise for the successful track record of its students.

A religious adviser to the Turkish embassy in Copenhagen, Adnan Bülent Baloğlu told a local paper that the Turkish outpost has collected information on “4 individuals and 14 schools” affiliated with the Gulen movement in Denmark.